Mamoru Samuragochi was a deaf composer (just like Beethoven) whose parents were irradiated in the nuclear blasts that hit Japan in World War II. He started playing piano at age four, created soundtracks for video games like Resident Evil, and composed the stirring “Hiroshima Symphony No. 1” as a memorial for nuclear victims, which made him famous. Until it turned out most of those things weren’t true.

The composer has now admitted that he hired a ghostwriter to compose his music starting in the 1990s after his career took off and his hearing problems worsened, he says. He didn’t write any of his seminal works—including the Hiroshima symphony. The real composer was Takashi Niigaki, a part-time lecturer at a music college in Tokyo who came forward about the deceptions just before the Japanese figure skater Daisuke Takahashi was set to skate at Sochi to Samuragochi’s “Sonatina for Violin.” (See a video of the routine below.)

“I could not bear the thought of skater Takahashi being seen by the world as a co-conspirator in our crime,” Niigaki said in a press conference. What’s more, the ghostwriter says that Samuragochi isn’t even deaf—it’s just an act to enhance his reputation as Japan’s “digital-age Beethoven.” Niigaki revealed that he had regular conversations with the composer, who seemed to hear just fine.

Samuragochi is “deeply sorry as he has betrayed fans and disappointed others,” a representative has said. The deception is doubly hurtful since Samuragochi became something like a musical emotional therapist for his country. In 2011 he composed a “Symphony of Hope” for victims of the Tohoku tsunami. 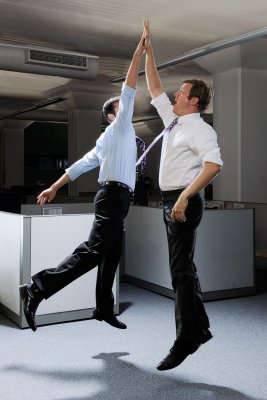 Missouri Rep Wants a High-Five to Be The Official State Greeting
Next Up: Editor's Pick