‘If I Give You Choice, I'm Showing Respect': How This Man Uses Design to Help the World’s Poorest Farmers

When Jim Taylor moved to Myanmar in 2004, it was ”one of the most isolated and poor countries in the world.” Then known as Burma, the country was terrorized by a repressive military junta and strangled by international sanctions. But Taylor and his wife and business partner Debbie Aung Din were accustomed to working in difficult environments like the Mississippi Delta, Indonesia, and post-Khmer Rouge Cambodia. “If you look globally, small farms are the epicenter of poverty around the world,” Taylor says.

Nowhere is that truer than in Myanmar, where 70% of the population relies on agriculture and 84% of rural households lack electricity. Taylor and Aung Din founded Proximity Designs, a social enterprise focused on Myanmar’s 35 million farmers. With a team of designers, engineers, agronomists and ethnographers, Proximity makes practical, affordable tools like foot-powered water pumps and drip-irrigation systems that help farmers’ increase crop yields and incomes. All but one of the tools costs less than $40.

Proximity has sold tools to over half a million families in 10,000 villages, boosting their livelihoods by, it says, a total of $263 million. The company now offers training and education on seeds, soil, and disease and low interest-rate loans to farmers, most of whom don’t have bank accounts.

Meanwhile, the country’s political transition and economic liberalization is “uncorking everything,” Taylor says, giving farmers access for the first time to new technology and information. “Farmers suddenly look around at Asia, they see farmers in India, in Thailand, in Vietnam and China and they go, ‘Wow, we’re really behind.’ They’re entrepreneurial, they’re enterprising, they’re generally not afraid of technology or new ways of doing things.”

Taylor spoke with TIME at the Fortune, TIME, and Wallpaper* Brainstorm Design conference in Singapore.

Why does Proximity Designs focus on small-plot farmers?

We had been looking at rural poverty for a long time, and saw it was a very neglected sector. It was under-served by the private sector, government, and the aid sector. We also understood that if you’re going to tackle poverty in Myanmar, the epicenter is the small-farm family. It’s still largely an agrarian economy; really, really low levels of productivity, low access to any kind of improved technology amd seeds, so it was an area that was really ripe for improvement.

Proximity treats farmers like clients, rather than recipients of charity. What does that mean in practice, and why is it important?

It was certainly a new idea back in 2004; now it’s become accepted wisdom in aid circles. The aid industry has a huge disconnect between providing things and getting any feedback. If you hand out something, great. If it’s worthless, you go, okay, well there’s really no consequences.

But in a business approach, you’re treating people like customers, you’re accountable to making things that people find valuable. I’ve had people angry with me, because [a product] broke prematurely, or it didn’t function. It’s just a much more respectful, natural way that people relate. And I think for the organization it has dramatic consequences. If I give you choice, I’m showing respect for you, and showing you’re a person who has your own dignity.

How has your approach changed since 2004?

After Cyclone Nargis [which killed an estimated 130,000 people and flooded 3.2 million acres in 2008], we began to really see the total lack of [government response] to farmers’ needs. They put a lot of emphasis on that first rice crop. And then a brown planthopper disease came in and destroyed thousands of acres. And it was the result of farmers seeing an insect and then panicking and applying pesticides.

Season after season, we began to see all these other pest and disease problems, and we realized farmers were really didn’t have access to information. They were very keen for it, but had been isolated for so long. So we saw an opportunity there to provide agronomy services, and that’s now in our fifth year.

A 2016 report from NGO Germanwatch named Myanmar one of the three more vulnerable countries in the world to extreme weather. What can be done to address the risk of climate change in Myanmar, or in other rural, agrarian regions?

Farmers really are the front line of shifting [weather] patterns. When farmers are looking at a late monsoon or an early monsoon, or an elongated one, those have a dramatic effect on crops.

In the Ayeyarwaddy Delta, we have all this fresh water that comes down from the Ayeyarwaddy [River], and then as the dry season gets longer, more seawater comes in. So we developed a technique, rather than a saltwater tolerant variety, a short-duration rice. It can just dramatically change people’s incomes if they can get that short, second crop in.

Just as we see temperature changes, and different pest and disease outbreaks, [we’re] helping [farmers] cope with that, with better seeds that are more drought-tolerant. A lot of environmental effects are just the result of poor infrastructure. And in Myanmar, one of the biggest constraints on agriculture is just the lack of investment in rural areas for decades. It’s just 40 years of neglect.

What is the biggest misconception about designing for social impact?

A farmer in Kansas and a farmer in Myanmar really aren’t that different. They’re really very conscious of risks, they’re interested in new technology if it’s practical and affordable.

You talk to any family: they want to send their kids to school, they want their kids to go to university. So these small little tools and devices and services can really help them do that. People make those connections all the time: I want something beautiful on my farm, and I know it’s going to help me stabilize my income, and therefore my kid is going to be able to go to college.

Do you think of your business as a “social-enterprise”?

I think many businesses are moving towards social impact. We’re able to attract really high-quality people in Myanmar because they want to work for an organization where they can make a mark, a difference.

I’m comfortable being labeled a social business, but this is really a trend. If we have a conversation in 10 years, this demarcation of social business and regular business will be less and less. When you look at what motivates us, we’re trying to address a poorly served market. Many successful businesses do that. 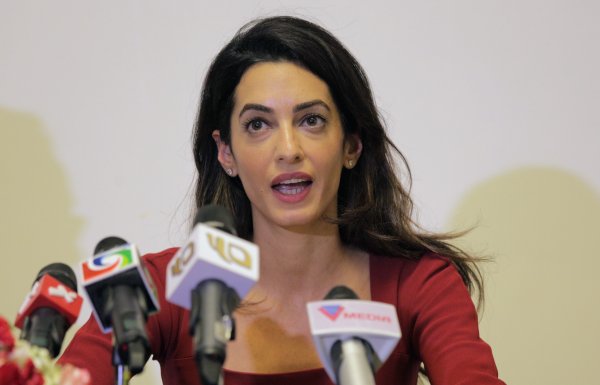 Amal Clooney to Defend Reporters Jailed in Myanmar
Next Up: Editor's Pick