Hundreds of thousands of people showed up to participate in the March For Our Lives rallies that took place all across the country on Saturday.

The student-led protests, which were started by the survivors of the Parkland, Fla. school shooting, called for stronger gun control laws and aimed to pressure lawmakers into enact real legislative change surrounding gun reform. The rallies drew huge crowds, with some estimates for the crowd size at the main march in Washington, D.C. as high as 800,000. The marches also garnered vocal support from celebrities and politicians alike, with many publicly donating to the March For Our lives GoFundMe campaign, which has raised almost $3.5 million so far. More than 830 demonstrations took place across the globe this weekend, according to Getty Images.

Here are some images that show how big some of the marches were from Boston to Seattle.

People gather at Union Park to take part in "March For Our Lives" protest against gun violence in the country on March 24, 2018 in Chicago, United States.
Bilgin S. Sasmaz - Anadolu Agency/Getty Images

Protesters Gather for March for Our Lives at National Center for Civil and Human Rights on March 24, 2018 in Atlanta, Georgia.
Prince Williams - WireImage

People take part in the March For Our Lives rally against gun violence in Washington, DC on March 24, 2018. Galvanized by a massacre at a Florida high school, hundreds of thousands of Americans are expected to take to the streets in cities across the United States on Saturday in the biggest protest for gun control in a generation.
Andrew Caballero-Reynolds AFP/Getty Images
Students from Marjory Stoneman Douglas High School in Florida, the scene of a mass shooting Feb. 14, were joined by over 800 thousand people as they march in a nationwide protest demanding sensible gun control laws.
Pacific Press - LightRocket via Getty Images
More Must-Read Stories From TIME 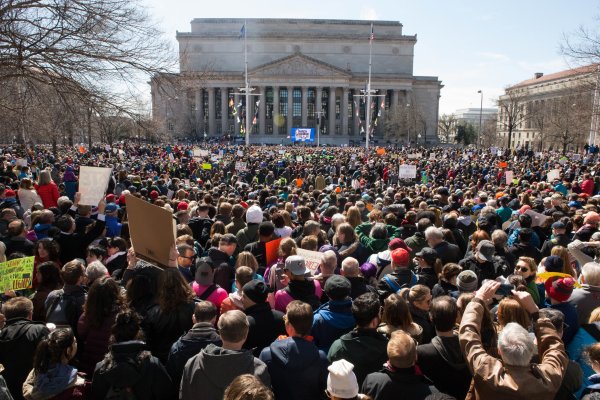 Here Are the Most Powerful Speeches From March For Our Lives in Washington
Next Up: Editor's Pick