'I Have a Dream That Enough is Enough.' Martin Luther King Jr.'s Granddaughter, 9, Gives Powerful Speech at March For Our Lives

“I have a dream that enough is enough.”

Nine-year-old Yolanda Renee King invoked the famous words of her grandfather Martin Luther King, Jr. – and gave them a 2018 twist – as she spoke to the tens of thousands of protesters demanding gun control at the March for Our Lives in Washington, D.C., Saturday.

In a surprise appearance amid a series of speeches from students impacted from gun violence in Parkland, Chicago, southern California and elsewhere, Yolanda spoke on a similar platform as her grandfather did 55 years early when he inspired generations with his historic “I Have a Dream” speech at the March on Washington in 1963.

“My grandfather had a dream that his four little children will not be judged by the color of the skin, but the content of their character,” said Yolanda, standing alongside Parkland shooting survivor Jaclyn Corin. “I have a dream that enough is enough. And that this should be a gun-free world, period.”

“Will you please repeat these words after me?” Yolanda asked the crowd. “Spread the word, have you heard? All across the nation we are going to be a great generation.”

But one repetition of her rallying cry wasn’t enough. “Now, I’d like you to say it like you really, really mean it,” Yolanda said before launching into the affirmation once again.

Yolanda was one of many young speakers at the rally in Washington, D.C. — and at 800 other protests around the world Saturday — to advocate for stricter gun control amid a growing number of mass shootings at schools, churches and other venues around the country.

Yolanda’s aunt Bernice King attended the March for Our Lives in Washington, D.C., as well, and posted tweets that quoted student speakers whose messages echoed those of her late father’s.

In a Facebook post, Bernice King wrote that she was a “very proud Aunt” after Yolanda’s speech. “My niece, Yolanda Renee King, truly represented the King family.”

Afterward on CNN, alongside her father Martin Luther King III, Yolanda said her school had a lockdown drill on Friday.

“We do all these lockdown drills because it’s unfortunate that people have guns and they use them to hurt people,” she said. 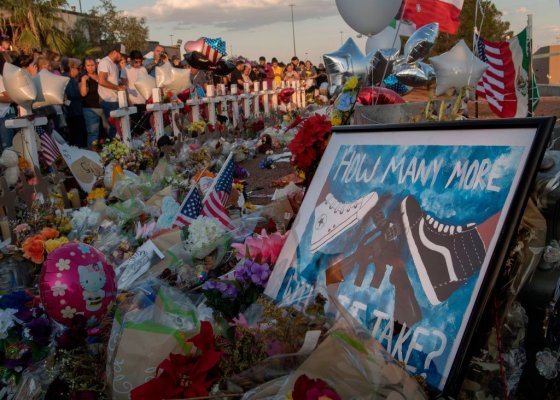 Social Media Has Been a Tool for Good After Mass Shootings. We Can't Cede It to Hate
EDIT POST