After President Donald Trump threatened on Friday morning to veto a massive spending package, you might have expected a bit more chaos on Capitol Hill.

After all, when the House and Senate left the Capitol on Thursday evening, they were leaving for a two-week recess, and many of them headed straight to the airport for overseas trips with other members of Congress. Had Trump vetoed the bill, there would have been a mad scramble of lawmakers returning to town to cobble together a new bill; in the meantime, the government would run out of money at midnight on Friday and shut down.

But the Capitol Building was quiet on Friday morning, confirming what many on the Hill told TIME: that they never really took Trump’s threat all that seriously.

Sent just before 9 a.m., Trump’s tweet lamented the lack of funding in the bill for a wall on the Mexican border and criticized Democrats (somewhat inaccurately) for failing to reach a compromise on the undocumented immigrants brought to the country as children.

But many in Congress, on both sides of the aisle, simply rolled their eyes at another flash of empty drama.

“No one thought he would go through with it,” one senior aide to House Democratic leadership said. “There were no conversations about [members] coming back.”

And so the Capitol Building was still in the hours after Trump sent his tweet. The automated subway that links the legislative building to the adjacent Senate office buildings was running, but its cars were mostly empty, a ghost train humming along the tracks. Members of the Capitol Police wondered to one another whether they’d be off by 3 o’clock; congressional staffers, without any instruction from their superiors to stand by, got in their Ubers and headed to Reagan National Airport. Reports that Arkansas Republican Sen. John Boozman was seen in the hallways could not be independently confirmed by TIME.

The response — or non-response — to Trump’s tweet is a testament to how many members of Congress have chosen to operate amidst the deluge of bluster and contradictory signals spewing from the Oval Office: keep your head down, do your job as always, and trust that the president’s staff will help keep him from following through.

In this case, Trump and his team were clearly at odds. His threat to veto the bill contradicted the official stance presented by the White House just hours earlier.

Speaking in New Hampshire on Thursday, Vice President Mike Pence praised the legislation as “the largest investment in our national defense since the days of Ronald Reagan.” (The bill allocates $650 billion in military spending, up $61 billion from last year, and in a concession to Democrats, also increases funding for domestic programs.)

Mick Mulvaney, director of the Office of Management and Budget, was less equivocal. “Let’s cut right to the chase: Is the President going to sign the bill? The answer is yes,” Mulvaney said on Thursday. “Is it perfect? No. Is it exactly what we asked for in the budget? No. Were we ever going to get that? No. That is not how the process works.”

But Trump was reportedly furious over the $1.6 billion allocated for border security, a paltry sum compared to the $25 billion he’d wanted. (Of that $1.6 billion, only $38 million goes to the “planning and design” of a “border barrier,” i.e. a wall; most of it is for fences.) Still, his veto threat on Friday morning didn’t add up. He fumed in his tweet that “800,000 plus DACA recipients have been totally abandoned by the Democrats,” referring to the executive immigration program he repealed in September, but in reality the Democrats had been so eager to reach a compromise on a legislative solution for these immigrants that they had initially offered full funding for Trump’s border wall. (Republicans refused.)

Still, most chose to assume he was bluffing, and they were right. Trump gave televised remarks shortly after lunchtime, telling reporters that he had signed the bill, while also criticizing it. Trump said he was signing the bill out of concern for the military, but he described the drafting of the 2,232-page legislation — a hasty process that also upset several members of Congress — as a “ridiculous situation.”

“I will never sign another bill like this again,” Trump said. “Nobody read it. Its only hours old.”

Trump was not alone in his ire. A faction of conservative Republicans in the House Freedom Caucus penned a letter to Trump earlier in the week lamenting, paradoxically, the bill’s “record levels of wasteful spending” and its inadequate funding for border security. On Thursday night, Sen. Rand Paul of Kentucky delayed the Senate vote by instead live-tweeting his reading of the lengthy bill, which he called a “sad excuse for legislation.”

Still, even those who opposed the package expected Trump to blink. “We never thought the President would veto this horrendous piece of legislation,” one senior Republican aide told TIME in an email. “We sure wished for it to be vetoed. The White House needs better legislative staff to ensure nothing similar to this ever makes it to his desk. They should have raised red flags all along the way. Simply put, conservatives got screwed. ”

In any event, crisis was averted. And on Capitol Hill, another brief flash of drama had passed without too much heartburn. “No one expected it, but no one was that surprised by it,” one Senate Democratic aide told TIME. “This is what he does.” 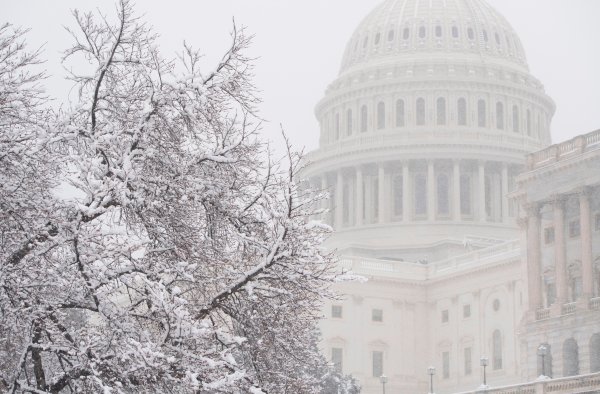 Congress Gave Trump a Fence Instead of Money for a Border Wall
Next Up: Editor's Pick