Precious Brady Davis says that she uses the label trans* to describe herself because it’s “undefinable.” While that may be true in some senses, the experts at the Oxford English Dictionary have still given it their best shot.

Trans* is one of many new words related to sexuality and gender that the OED announced it has added on April 3, which also includes terms like ambisexual, asexual, bi-gender and heterosocial. It’s a collection that reflects our “increasingly complex understanding of these two distinct aspects of human experience,” says OED lexicographer Jonathan Dent. And trans* is a good example of how layered it can get.

“I don’t want to be defined just by one label,” says Davis, a deputy press secretary for the Sierra Club in the Midwest. “And that’s what trans* does: it creates many.”

When said out loud, some refer to the term as “trans asterisk.” Others call it “trans star.” Here’s the definition, per the OED.

The asterisk at the end of the word is known as a wildcard in search lingo, a tool you can use to search for a batch of words that begin the same way. If you typed “trans*” into the OED’s advanced search field, for example, the results would include every word that begins with those five letters, regardless of what comes after: transaction, transfix, transient and several hundred more.

Based on Dent’s research, people in the LGBTQ community started using trans* as an umbrella term in the 1990s, as a way to “cover a wide range of identities” that do not conform to “traditional notions” about gender. At the time, some of the more common terms did in fact start that way (transgender, transsexual). Others, like crossdresser, didn’t. But the term trans* came to encompass those too.

Susan Stryker, an associate professor of gender and women’s studies at the University of Arizona, jokes that when said out loud, trans* should be pronounced “trans whatever.” More seriously, she says the term provides “a way of pointing to a somewhat related class of phenomena without having to articulate exactly what that is” or get into “fine-grain distinctions.”

Over the years, as labels have proliferated and discussions about gender have evolved, the asterisk has taken on deeper meaning. People refer to the notion that there are only two fixed genders — man and woman — as the gender binary. Plenty of transgender people see themselves as fitting in this binary, just assigned to the wrong category based on their anatomy at birth. But an increasing number of people describe themselves as non-binary. They might feel that neither category fits and they have no gender at all (agender) or they might feel that that both apply (bi-gender) or they might feel that their gender can change over time (gender fluid). The asterisk has functioned as a way to be inclusive those identities, too.

For people like Davis, there is clearly a freedom that comes with this inexactitude. Trans* is not just a term that can include all kinds of people; it can also describe a single person who sees themselves in all kinds of categories. If she tells someone she’s a transgender woman or even trans, “that comes with a wide range of assumptions,” she says, including the notion that she might totally reject the gender she was assigned at birth. Adding the asterisk is a way to be “free” of expectations and constraints, to symbolize that a person’s gender is “always morphing and changing,” she says.

Sam Killermann, an educator who travels the college circuit speaking about these topics, says that trans* can also serve as a term that refers to everyone who is not cisgender. (That label describes the vast majority of people who feel like the gender they were assigned at birth suits them just fine.) It has a more empowering ring, he says, than to simply say non-cisgender — the same way it might feel empowering to use people of color rather than non-white. “Let’s describe something by what it is,” Killermann says, “not by what it isn’t.”

Not everyone is a fan. Some people feel like this expansive view is forcing the term trans* on sexual and gender minorities who might not want to be under that umbrella, or who live in cultures where gender is thought about in different ways—similar to how someone might say they reject the label Hispanic because they are Peruvian-American. Other people feel like it’s redundant, that the word trans can do all the same jobs without the difficult-to-pronounce symbol attached. “Some people think of it as trendy and cutting edge and insider,” Stryker says, “and some think it’s obnoxious.”

Being added to the OED is a form of recognition. Lexicographers typically only define words that they think have staying power. Stryker says she noticed trans* taking off in the 2000s and that it’s both rising and falling in popularity these days. Some people think it’s misguided or passé and are moving away from it. But others are embracing it because “it does address this need to denote or designate something that is hard to classify,” she says, likening it to gender-neutral descriptors like Mx. (an alternative to Mr. or Mrs.) and Latinx (an alternative to Latino or Latina).

“It’s become a sponge that absorbs new uses that are brought into it,” Stryker says. And at the very least, “it’s the site of a lot of discussion.” 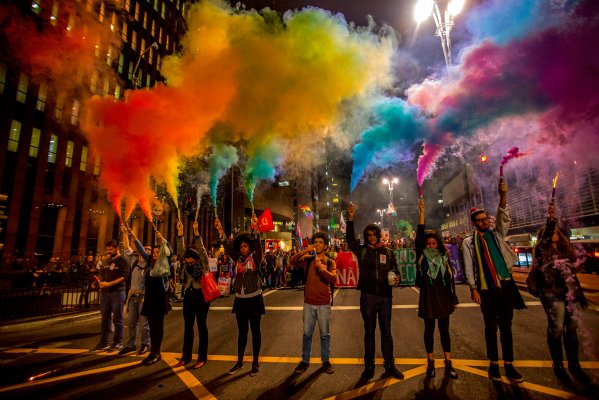 Why 'Latinx' Is Succeeding While Other Gender-Neutral Terms Fail to Catch On
Next Up: Editor's Pick