On the night of March 14, Rio de Janeiro councilwoman Marielle Franco and her driver Anderson Pedro Gomes were shot and killed in her car after leaving a black-women’s empowerment event. The killing of the human-rights activist mobilized tens of thousands of Brazilians to demand justice and sparked tributes from around the world.

Born and raised in the Maré favela, one of Rio’s most dangerous slums, 38-year-old Franco was a fierce advocate for the marginalized–including Afro-Brazilians, the poor, the LGBTQ community and women–and a critic of President Michel Temer’s federal intervention in the city. As a black, lesbian single mother, she was a minority several times over in Brazilian politics and the only black woman on Rio’s 51-member city council, having received the fifth most votes in the election that won her the seat.

From mourning to revolt

Tens of thousands of people have protested Franco’s death in cities across the country, as well as in New York City, Paris, Berlin and elsewhere. Her name was mentioned in more than 3 million tweets in 54 countries over the two days following her death, often with the hashtags #MariellePresente (Marielle Is Here) and #SayHerName, the latter borrowed from Black Lives Matter activists. Some demonstrators have also used her death as a rallying cry to call for an end to systemic racism in Brazil.

Some activists believe Franco was killed for speaking out against abuses of military and police power in Brazil, and human-rights observers have criticized what they call a culture of impunity in Brazilian law enforcement. The protests, led largely by young Brazilians, have highlighted their demands for legitimate leadership and their broader dissatisfaction with the nation’s political system. As the police continue their investigation into the apparent hit, many of Franco’s followers are looking to the October elections as an opportunity to continue her struggle. 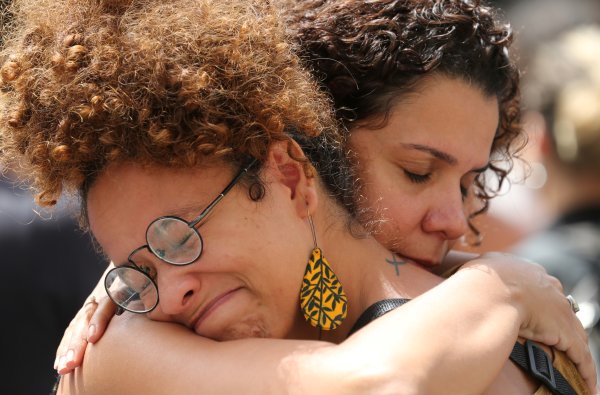 Death of Rio Politician Strikes a Chord in Brazil
Next Up: Editor's Pick