It was early March, and President Donald Trump had a dramatic plan: impose a new round of import tariffs on America’s largest trading partner, China. But in meeting after meeting, his aides warned just how costly the move could be. It would hurt U.S. workers and slice into the stock market, they said. It didn’t have the backing of fellow Republicans. It would be bad politics for a party facing tough odds in November’s elections. They reminded him that the global aluminum and steel tariffs he imposed earlier in the month had led European allies to prepare retaliatory moves and had prompted the White House’s chief economic adviser to resign. Who knew what unintended consequences this new plan might unleash?

The President nodded along, now and then mumbling an O.K., and the White House aides thought they had prevailed. But in the middle of the month, they were summoned to hear from the President again: he wanted $30 billion in tariffs on Chinese products. Hours later, the staffers read that Trump had doubled the figure to $60 billion.

Welcome to Season 2 of the Trump Show, to borrow a phrase from one of his veteran aides. Fed up with experts and advisers and increasingly comfortable in the job, Trump is determined to do things his way. “The President feels he’s got this now,” says one White House official, who does not share his confidence.

Inside the White House, the mix of high-impact policy moves and high-profile personnel changes is taking its toll. Conversations with more than two dozen current and former Administration officials during the past month reveal a White House in the grip of anxiety as staffers fear the next email or phone call could bring word they’re being fired too. Some have taken to asking reporters about rumored staff changes, suspecting journalists will know before those running the government. More worrying: Trump’s own aides fear the fallout for the country and the world that may result as he tests the limits of the power of the presidency.

Secretary of State Rex Tillerson pauses while speaking at the State Department in Washington on March 13, 2018.
Andrew Harnik—AP/Shutterstock

Trump has always preferred a chaotic workplace. But his confidence in the Oval Office is new. When he won the White House–back when no one in his orbit had pleaded guilty, Mueller was at a white-shoe law firm and liberals still blamed then-FBI Director James Comey for Hillary Clinton’s loss–Trump decided he needed some experience around him. He had been a successful businessman, but as the head of a privately held real estate empire, he’d never suffered a board of directors or oversight of stockholders. Moreover, he knew he was the first Commander in Chief not to have previously served in government or the military. So Trump hired a flight of experienced Washington hands to help guide him. They were the guardrails of his presidency.

And Trump hated it. These men–and they were largely men–told him, often in charts and pictures, why his preferred actions were dangerous. Sometimes they were right. But in recent weeks, Trump has focused more on decisions where their dire predictions haven’t come true, aides say. They told him that moving the U.S. embassy in Israel from Tel Aviv to Jerusalem would cause lasting chaos in the Middle East. (It did not.) They warned him that tariffs on steel and aluminum would spark a trade war with Europe. (It wasn’t as bad as they had feared.) They warned that a debt-heavy tax-cut package would spook investors. (Wall Street is booming, although investors are warning clients that a reckoning is coming.) These advisers–“the so-called experts,” Trump mockingly labeled them–had all been proven wrong, he said. Why, he wondered aloud, was he listening to them?

FBI deputy director Andrew McCabe, center, is escorted to a meeting with members of the Oversight and Government Reform and Judiciary committees in Washington on Dec. 21, 2017
Chip Somodevilla—Getty Images

And over time, the guardrails gave way. Trump ditched some of the staffers. Gone was the first chief of staff, Reince Priebus, along with several of his deputies. Tillerson was his boldest firing yet. Others were forced out by scandal or by Trump’s order-seeking chief of staff, retired Marine General John Kelly. Rob Porter, the White House staff secretary–the Administration’s traffic cop for top-secret and other files–was pushed out when the public learned he had been accused of abusing his ex-wives. The President’s personal aide, once a YouTube viral video star with a knack for trick throws of footballs and a reported penchant for online gambling, was sent packing soon after, but he landed a new gig at the Trump 2020 campaign.

Then there is the departure of Hope Hicks, Trump’s top media strategist, who was tired of working in a windowless closet within shouting distance of the Oval Office. As much as anyone, she had been able to influence the President, and White House officials worried that her departure could leave Trump unmoored. Top economic adviser Gary Cohn resigned after losing an internal fight over metals tariffs. On March 19, the President roiled his legal team, adding well-known Washington lawyer Joseph diGenova, who had accused the FBI and Justice Department of conspiring against the President.

To hear Administration officials tell it, the exodus is only beginning. Lieutenants to Kelly and National Security Adviser H.R. McMaster, two of the most experienced remaining advisers, expect their bosses to depart shortly. That would leave Trump alone at center stage. More confident in his ability to run a country, Trump wants to surround himself with people he likes, say aides. That increasingly means people he likes on television. To fill Cohn’s spot, Trump hired Larry Kudlow, a onetime junior aide to President Ronald Reagan and a regular on CNBC, as his top economic adviser. He promoted the Columbia-educated former Fox and Friends anchor Heather Nauert to the top public diplomacy post at the State Department. Trump is eyeing another Fox contributor, Pete Hegseth, to take over the troubled Department of Veterans Affairs.

No staff change could have a greater impact than the removal of Mueller, but Trump has shown he is increasingly frustrated by the special counsel’s probe, which has reportedly delved into the President’s business records. “If you had been attacked mercilessly and continuously,” press secretary Sarah Huckabee Sanders explained March 20, describing her boss’s mood, “and literally, every day you wake up to an onslaught of people saying that you’re there because of reasons that are completely false, that’s frustrating.” Even Trump’s most loyal pals worry he will respond to that perceived attack by firing Mueller. “That would be the beginning of the end,” predicted Republican Senator Lindsey Graham of South Carolina, a golf partner to the President. “That would be the stupidest thing the President could do,” added GOP Senator Orrin Hatch of Utah, a reliable ally.

Maybe Trump’s increasing theatrics don’t matter. Maybe he can thrash about the White House–offending his nominal friends, enraging America’s allies and spooking the financial markets–without doing much lasting damage. Trump’s supporters point to steadying forces around him, like Defense Secretary Jim Mattis and first daughter Ivanka Trump. But these same voices previously cited Tillerson and Cohn in the same role. Now both have departed, and Kelly and McMaster might not be far behind. “It’s no secret the President is not a patient man. Now, he’s really out of patience and will be doing things his way,” says one Republican on Capitol Hill. “The President tried it their way and didn’t like what he was seeing.” What comes next will make for edge-of-your-seat viewing. But it brings real risks. 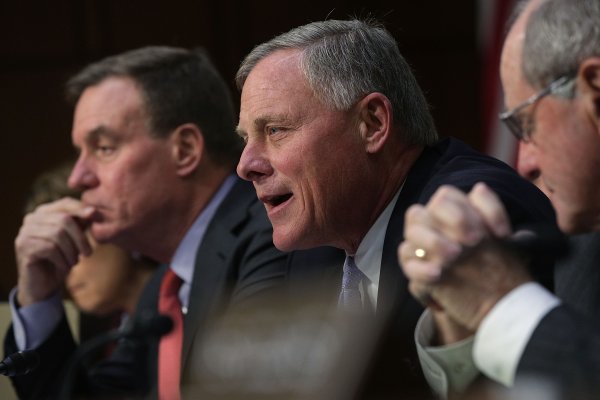 Russia Will Interfere in the 2018 Elections. Those Fighting It Say We're Not Ready
Next Up: Editor's Pick