How to Avoid Getting Sick on a Plane, According to Science

Choosing the right seat may be the simplest way to stay healthy on your next flight, according to a new study.

Picking the window seat — and staying put for the duration of your flight — minimizes your chances of coming into contact with a sick passenger and picking up their pathogens yourself, according to a paper published Monday in Proceedings of the National Academy of Sciences. People seated along the aisle are most likely to encounter potentially ill passengers or crew members as they move around the plane, possibly upping their chances of infection.

That finding may seem obvious, but the study is among the first to look specifically at how disease spreads on airplanes, given the widespread belief that flying raises your risk of getting sick.

The researchers behind the new paper traveled on 10 domestic flights, tracking the movements of passengers and crew members during the trips. During the 10 flights, which lasted between 3.5 and five hours each, they only observed one person actively coughing. Swabbing and testing seatbelt buckles also didn’t turn up evidence of any of 18 different respiratory-illness-causing viruses on any of the planes, even though eight of the flights occurred during flu season.

Nonetheless, the researchers were able to create disease transmission models using the passengers’ movement patterns, as well as what scientists already know about the way respiratory illnesses are spread — namely by sick people coughing, sneezing or breathing around others.

They found that the 11 people seated closest to a hypothetical sick passenger — the two others in their row, the three passengers in the rows in front of and behind them and the three passengers seated in these rows across the aisle — are the most likely to get sick, while nearly everyone else on the plane has a negligible risk. Outside this radius, people in window seats have the lowest overall risk of getting sick, the researchers write.

All told, a sick passenger is likely to infect, at most, two other travelers, while an ill crew member — who likely moves around the cabin far more during a flight — could infect four or five, the paper says. That said, the researchers note that crew members are unlikely to work if they’re very sick, and if they do, they may take medication, which can reduce the risk of transmission. 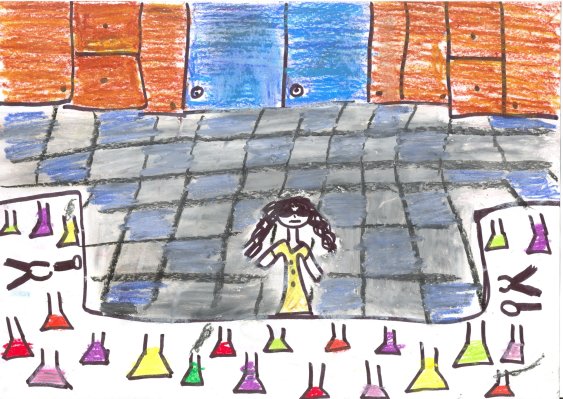 Researchers Asked Kids to ‘Draw a Scientist.’ Here's What They Came Up With
Next Up: Editor's Pick