Detained Reuters journalists Kyaw Soe Oo and Wa Lone talk to the media as they are taken from court in Yangon, Myanmar on Feb. 14, 2018.
Ye Aung Thu—AFP/Getty Images
By Eli Meixler

Wa Lone and Kyaw Soe Oo would normally spend their days chasing sources and writing stories. But on Wednesday, after a full 100 days in jail, the two Reuters reporters spent their hours in a dusty Myanmar courthouse, where they could face up to 14 years in prison if convicted of possessing secret government documents.

Reuters has said the pair’s arrest was related to their most recent investigative project: a groundbreaking report detailing the deaths of 10 Rohingya Muslims found in a mass grave in the country’s west, where the military has been accused of a campaign of ethnic cleansing against the persecuted minority.

“Wa Lone and Kyaw Soe Oo are exemplary individuals and outstanding reporters who are dedicated to their families and their craft,” Stephen J. Adler, President and Editor-in-Chief of Reuters, said in a statement Wednesday. “They should be in the newsroom, not in prison.”

The pair were apprehended in Yangon on Dec. 12, after accepting an invitation to meet two police officers over dinner. They were reportedly handed documents believed to be related to security operations in Rakhine state, where an estimated 671,000 have fled across the border into Bangladesh since August last year. The Myanmar military has been accused of rape, extrajudicial killings and arson of villages. The U.N. rights envoy to Myanmar said the violence bears “the hallmarks of genocide.”

Almost immediately after being handed the documents, the pair told relatives, they were taken into custody. An official with the ruling party has suggested they may have been entrapped, and the case against them has been mired with inconsistencies. Their arrest has been widely condemned by human rights groups, press freedom advocates and senior diplomatic figures, including U.N. Secretary General Antonio Guterres and Bill Clinton. In a March 21 statement, the Danish Embassy in Yangon said the reporters “should be thanked and not punished, nor should they be subject to a dragged out trial.”

“There is little hope the case will be judged fairly,” says Shawn Crispin, the Committee to Project Journalists’ Southeast Asia representative, describing the trial as “farcical” in an email to TIME. “It seems more likely authorities aim to use the case to send a message to all media that if we are willing to take Reuters down then nobody is safe if they report critically on the Rohingya story.”

Last month, Wa Lone and Kyaw Soe Oo were honored with the National Press Club ‘s 2018 Aubuchon Press Freedom Award, which recognizes journalists who “embody the struggle to advance press freedom and open government.” In early March, they received Reuters’ prestigious Baron Award. Despite the accolades, Myanmar authorities have kept them detained for months, sending a chilling message to other journalists in the Southeast Asian nation, which was ruled by the military until 2016.

“These arrests send a clear message to journalists across Myanmar, especially those working on sensitive issues, that the government can and will still arrest you at any time,” Human Rights Watch Asia researcher Richard Weir told TIME in an email. “There have been numerous cases in which journalists have been arrested, charged, and imprisoned under a raft of obscure or easily contorted legal instruments, all having the effect of tightening the noose on the press and free speech more broadly.”

Wa Lone and Kyaw Soe Oo, however, appear undeterred. “The government can arrest us like this, waste our time in the court for many days and stop us from being able to write news,” Wa Lone told reporters after a hearing on March 7. “But…they can never hide the truth. We, journalists, will find the truth.” 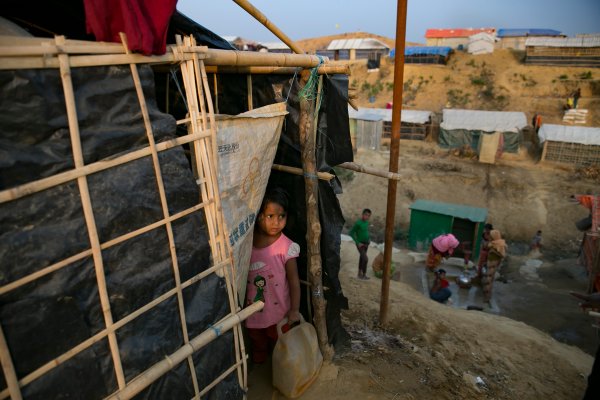 Facebook Has 'Determining' Role in Rohingya Violence: U.N.
Next Up: Editor's Pick