The Broadway duo released a song titled “Found/Tonight,” which combines Hamilton’s “Story of Tonight” and Dear Evan Hansen‘s “You Will Be Found.” The track is inspired by the movement started by Marjory Stoneman Douglas High School students in the aftermath of the shooting that left 17 dead in February. A portion of the proceeds will go to the upcoming March for Our Lives rally, a nationwide protest on March 24 initiated by Parkland shooting survivors that calls for gun control.

“These students are paving the way for future generations and it’s so inspiring to see young people standing up for what is probably the most important cause right now in this country, and demanding action,” Platt said in a statement.

The song instantly shot up to the top of the iTunes’s Top Songs by Monday morning, where it is available to purchase for $1.29. The Hamilton-Dear Evan Hansen mashup is also available for free on streaming platforms like Spotify. A representative from Atlantic Records did not immediately respond to a request from TIME inquiring how much money the song had raised for the March for Our Lives initiative thus far.

The song is part of Miranda’s monthly “Hamildrops” releases and was produced by Alex Lacamoire, who served as the musical supervisor on both Tony Award-winning musicals.

While from fundamentally different shows set hundreds of years apart, the two songs grapple with adolescence and community. Hamilton‘s “Story of Tonight” depicts the burgeoning revolutionaries on the cusp of fighting for America’s independence reflecting on impact and legacy. “You Will Be Found,” written by Dear Evan Hansen‘s Justin Paul and Benj Pasek, follows a teenager — originally played by Platt — struggling with social anxiety and using a newfound platform to tell others they are not alone.

Cameron Kasky, one of the Stoneman Douglas students leading the charge on gun control, tweeted that the two musical theater stars “did something amazing.” “I also cried,” he added.

The collaboration also appears to have also struck a chord with musical theater fans. Indeed, Hamilton and Dear Evan Hansen won numerous Tony Awards in 2016 and 2017, respectively, and continue to be some of the hottest Broadway tickets since. Miranda and Platt have since left their shows for other projects.

Since Hamilton catapulted Miranda’s fame, the performer and songwriter has come to use his platform to spread awareness and raise funds for different causes. After the devastating Hurricane Maria ripped through Puerto Rico and the Caribbean over the summer, Miranda recorded a new single — “Almost Like Praying” — with a number of high-profile collaborators to raise funds for disaster relief. That song was inspired by West Side Story‘s “Maria,” and includes the names of all 78 towns in Puerto Rico. 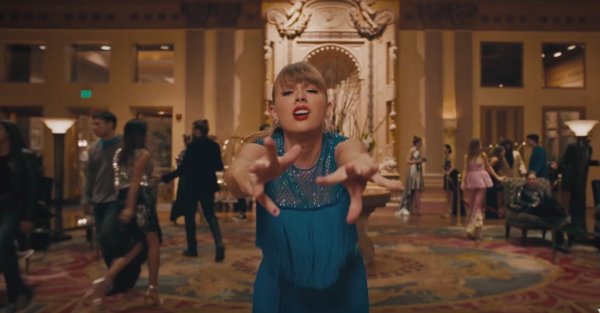 The Internet Thinks Taylor Swift's Video Is Loaded With Hidden References to Joe Alwyn
Next Up: Editor's Pick