New Orleans Mayor: America Is Stuck 'In a Mentality Where They Could Lynch You'

NEW ORLEANS, MAY 7, 2017: A person in opposition to the removal of monuments to the Confederacy holds confederate flags against the Robert E. Lee statue in New Orleans, Louisiana. (Photo by Annie Flanagan for The Washington Post via Getty Images)
The Washington Post/Getty Images
Ideas
By Mitch Landrieu
Mitch Landrieu is the mayor of New Orleans and the author of In the Shadow of Statues: A White Southerner Confronts History.

I believe that the four Confederate monuments in New Orleans that became a dominating presence in my life for well more than two years never reflected what the true society of New Orleans, generations ago, actually felt when they were built. The structures reflected what the people who erected them, mostly ex-Confederate soldiers or sympathizers, believed because they had the power to build them and because they wanted to send a particular political message. They cast a dark and repressive shadow over my city and, in a way, held us back. It took most of my lifetime to see this. I listened to the words of people who had absorbed a different message from those statues than the one I did over the many years I passed by them with little thought about why they were there. A great part of the territory of governing is listening and learning from your people. And once you do learn the truth about the past, you have a responsibility to act, and so I did.

I realized that for many whites, Lee Circle, which displayed a prominent statue of Confederate General Robert E. Lee, was a place that had always been there, a familiar piece of the urban fabric, a landmark, like streetcars, with the small park around the base of the monument where people navigated bad traffic patterns and watched Mardi Gras parades. As tolerant as New Orleanians are in many respects, I knew that a move to change the traditional cityscape would involve confronting a deep, complicated history. The Civil War was about slavery. And Robert E. Lee was being celebrated in our most prominent spaces.

A week before Christmas 2015, the City Council voted 6–1 in favor of dismantling monuments. A Baton Rouge company that had done work for the city of New Orleans agreed to service the order for removing the structure once we were out of the legal thicket — the Louisiana Landmarks Society had filed suit against our plan, citing its members’ “recognized interest in the aesthetic and cultural well-being in the city of New Orleans, and in the preservation and maintenance of the four monuments at issue.” I assumed the legal appeals would be tossed out soon; before we reached that point, the owner of the Baton Rouge company and his wife received death threats, which we reported to the FBI, and his expensive sports car was set afire in the driveway of his business.

The spread of domestic terrorism has many small stories like this, threats, acts of religious desecration, and vandalism that move across the news radar or make a few paragraphs on inside pages of the local press, and no one gets caught, or if so quite some time later. This is part of the ho-hum racism that eats through our country every day. In other words, we really haven’t made it as far as we like to think — we’re still mired in a mentality where they could lynch you, destroy your reputation, hurt your business, or engage in symbolic lynchings, like a cross burned on your lawn or the car in your driveway torched. When the media reported the story on the burned car, I realized we were facing an opposition that went far beyond historic preservationists to a burning fringe of people bent on criminal behavior.

As tension built inside me, a thought kept gnawing at me — how badly we had been taught about the Civil War, how little about slavery or Reconstruction, or Jim Crow, for that matter. Also how the ingrained racial attitudes I encountered in youth and through adulthood in a city with such a wonderful mix of humanity reflected in the music and cuisine, the balls and parades, nevertheless had a cold, dark underside — and it’s not just New Orleans. You can drive 50 miles from here and find people in rural towns who felt emotionally invested in the Robert E. Lee statue as an idea of the Civil War — what the South was. Drive a few hundred more miles to outer edges of the South and find white people who think “the South” is misunderstood, that the heritage of their ancestors, or the idea of an honorable war, as taught in schools and passed through family tradition, supersedes why that war was fought.

Read an interview with Mitch Landrieu.

How else do we explain the blanket of hostility toward black people that shrouds the voting patterns of the white South? Has the white South truly reckoned with the Civil War? Think about the Southern Strategy of the Republican Party as fomented by Nixon, carried on by Reagan, and now reenacted with President Donald Trump. Even with large black populations, no Southern state has a voting black majority; and every Southern state is schizophrenically split on voting lines of race, Louisiana high among them. Race is the great dividing wedge used by what was once the party of Lincoln to attract working-class whites and country-club conservatives who otherwise share few economic interests with each other but are united against the interests of African Americans.

Politics in the highest sense is grounded in hope. If we put our best instincts and willing minds to the common good, we can rebuild what has been destroyed by storms, derailed by hate, or eroded by neglect, and steer our society on a saner, safer course. We can pass on the promise of America to our young. We have made great strides in that direction in this city I have been privileged to govern.

When we testify in court, we swear to tell the truth, the whole truth, and nothing but the truth. This is important because anything but the whole truth and nothing but the truth will lead us astray. Unfortunately, that is the story of the American history most of us know, particularly as it relates to race. To move forward, we must commit to tell the whole truth about our past. To move forward, we must find that new space on race here, a zone of belief that holds promise for a nation committed to justice for all of our people, making right what we have failed to do, and insisting that we will do what it takes to reach the next threshold for humankind.

Adapted from IN THE SHADOW OF STATUES: A White Southerner Confronts History by Mitch Landrieu, to be published on March 20th by Viking, an imprint of Penguin Publishing Group, a division of Penguin Random House, LLC. Copyright © 2018 by Mitch Landrieu. 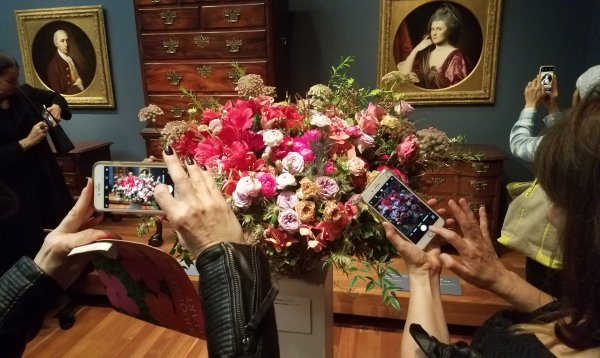 Is Instagram Ruining Art? One Museum Is Trying 'Photo Free' Hours
Next Up: Editor's Pick