Donald Trump Said America Is Going to Mars. Here's Why That Won’t Happen Any Time Soon

Ejection seat: There's no pilot on this space mission
(Sandy Huffaker; Getty Images)
Ideas
By Jeffrey Kluger
Jeffrey Kluger is Editor at Large for TIME magazine and the author of ten books, including Apollo 13, Apollo 8 and two novels for young adults. He has written more than 40 cover stories for TIME on topics ranging from space to human behavior to climate to medicine. Along with others at TIME, Kluger is an Emmy nominee for the web series A Year in Space.

History has no record of the first drafts of the speeches President Kennedy delivered in 1961 and 1962, when he set America on a path to space. Still, it’s a safe bet they didn’t include the lines: “Space is a warfighting domain. We may have a Space Force. Develop another one. Space Force.”

President Kennedy, however, wasn’t President Trump, and the current President said precisely those things in a speech at the Marine Corps Air Station in Miramar, Calif., on March 13 — only instead of the moon, he promised Mars.

Still, let’s unpack Trump’s various ideas, starting with the Space Force. There are a lot of things wrong with this proposal, not the least being that it may violate international agreements. More than half a century ago, the U.S. and the Soviet Union became principal signatories on what is formally known as “The Treaty on Principles Governing the Activities of States in the Exploration and Use of Outer Space, Including the Moon and Other Celestial Bodies.” That mouthful name has been colloquially shortened to The Outer Space Treaty, but whatever it’s called, one of its foundational rules is no fighting in space.

Article IV of the treaty explicitly forbids nuclear or other weapons of mass destruction anywhere in space, as well as any military activity of any kind on the moon or other worlds.

Even if Trump kept the space weaponry conventional, there’s a risk of nuclear escalation back on Earth. In 1983, President Reagan proposed his Strategic Defense Initiative (SDI), an array of non-nuclear, space-based defensive weapons to protect the U.S. from a first-strike attack by the Soviet Union. Moscow, however, saw a good defense as at least a prelude to offense and warned that the SDI violated the existing Anti-Ballistic Missile (ABM) pact and Strategic Arms Limitation Treaty (SALT) — both of which regulated nukes. Tear up ABM and SALT, and you’re off to the arms races.

Star Wars was not the first time the U.S. considered militarizing space. The idea initially got traction in 1963, when the Air Force announced its plans for a Manned Orbiting Laboratory, which was actually not a laboratory at all, but instead a single-module space station for astronaut-spies. That project too had its run, burned through $1.5 billion in 1960s dollars, and was scrapped in 1969. And that one too never worked out its engineering bugs, except for the toilets — really — which later flew on the Skylab space station.

This time, even the military isn’t buying what Trump is selling. In July of last year, when Congress actually considered funding a space force, Defense Secretary Jim Mattis shot it down. “At a time when we are trying to integrate the Department’s joint war-fighting functions, I do not wish to add a separate service that would likely present a narrower and even parochial approach to space operations,” he wrote in a letter to a Congressional Republican who also opposed the idea. Mattis appears no more favorably inclined today, and the chilly silence you heard from the Pentagon following Trump’s speech shows that.

Ever since the first moon landing, in 1969, the rule for Mars has always been that we’re going there, we just never actually get there. First, the target date was 1975, then 2019 — chosen because it will be the fiftieth anniversary of that moon landing. Now it’s 2035 or so. Elon Musk, the head of SpaceX, has claimed he could get there by 2024.

It’s Musk’s accomplishments that seem to be behind Trump’s current Red Planet Fever. At a March 8 cabinet meeting, the President was still swooning over the Feb. 6 launch of SpaceX’s Falcon Heavy rocket — particularly the safe landing of two of its three spent boosters. (The third one crashed.) But Musk himself has walked back his 2024 promise and gotten a good deal more realistic about the challenges a Mars mission poses. “It’s difficult, dangerous, [and there is a] good chance you will die,” he said at a South by Southwest talk on March 11.

Trump has much more control over NASA’s own Mars push, but he’s not really exercising it. NASA’s annual budget comes in just north of $19 billion, which represents about 0.4% of the federal budget. Back in the Apollo days, it was 4%. That lean funding has meant go-slow progress on the principal hardware needed for a Mars mission — the Orion spacecraft and the heavy-lift SLS rocket — both of which have been in development since 2004. The earliest launch of even an uncrewed test version will not likely occur until 2020. If Trump wants to speed things up, he could work with Congress to open the money spigot much wider. He hasn’t.

Finally, there is the matter of Trump’s swipe at Hillary Clinton, in which he suggested that she was indifferent to a Mars mission. But as is often the case, Trump seems to have made this up on the fly. In an online science debate during the election in which the presidential candidates submitted written answers to questions, Clinton wrote: “Today, thanks to a series of successful American robotic explorers, we know more about the Red Planet than ever before. A goal of my administration will be to expand this knowledge even further and advance our ability to make human exploration of Mars a reality.” She restated that commitment in a similar forum with Space News magazine.

Trump did not mention Mars on either occasion, but he did write that a strong STEM program in schools will help “bring millions of jobs and trillions of dollars in investment to this country.” There was no real-time moderator to press him on the “trillions.”

The current president may or may not be learning an immutable truth that previous presidents have learned, which is that it’s extremely easy to get drunk on space, but it’s extremely hard to turn that intoxication into a working national space policy. The job takes discipline, vision, patience, an ability to work closely with Congress and a real understanding of the relevant science. A few of those previous presidents exhibited those qualities. If the current one wants to get anywhere near Mars, he will have to do the same. 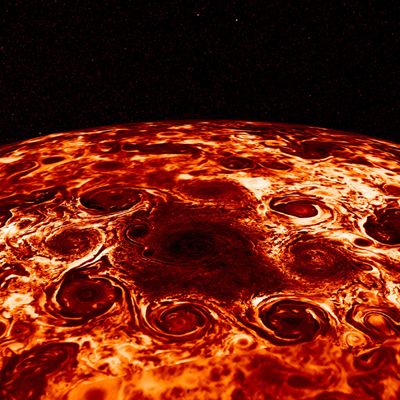 See Dramatic Cyclones Churning on Jupiter's Surface in These New NASA Photos
Next Up: Editor's Pick