Polish President Andrzej Duda is seen arriving ahead of a ceremony for the handing out of state medals on the National Day of Remembrance of Cursed Soldiers in Warsaw, Poland on March 1, 2018.
Jaap Arriens/NurPhoto
Ideas
By Steny Hoyer, David Price & Brad Schneider
Rep. Hoyer of Maryland is the Democratic Whip in the U.S. House of Representatives, where Rep. Price of North Carolina and Rep. Schneider of Illinois serve.

In recent months, we have seen a dramatic and troubling rise in anti-Semitism across the globe. Even more alarming, it has spread after being promoted by leaders of far-right parties. Just this week, Vladimir Putin absurdly suggested that Jews could be behind his government’s meddling in the 2016 U.S. election. Comments like these make clear that the world needs to be vigilant against anti-Semitic rhetoric and actions, and to strengthen democratic institutions around the world. That’s why we are deeply concerned by Poland’s new Holocaust censorship law. We are calling on President Andrzej Duda, Prime Minister Mateusz Morawiecki and the National Assembly to repeal the law.

Two weeks ago, we met with a delegation from Poland to convey that message. We reminded the delegation of the close collaboration between our institutions — the House of Representatives and the Sejm and Senate of Poland — to put an effective and modern Parliament in place after the fall of communism. This progress and commitment to democratic norms made Poland not only a model for Eastern Europe but the envy of the western world at the time.

That’s what makes the ongoing democratic backslide in Poland so much more astonishing. From concerted efforts to politicize the judiciary, to the new law that censors references to the Holocaust, Poland is at a crossroads in the current government’s broader shift away from democratic principles.

Under the new Holocaust censorship law, discussion of complicity by Polish state or military organizations in the Holocaust is forbidden and subject to criminal penalty. Defenders will argue that the law covers only official acts by the Polish government-in-exile or its successor state. But no longer can Polish schools and universities teach without fear of prosecution what happened in, for example, Jedwabne in 1941, when during the German occupation local Polish authorities led a mob in massacring that town’s Jewish population. Neither can historians unambiguously publish books that explore the virulent local anti-Semitism that led neighbor to turn on neighbor and manifested after the war during the brutal Kielce Pogrom in 1946 or during the Communist-led persecutions and expulsions of 1968. Poland has a complex history with anti-Semitism that needs to be studied and reckoned with, not suppressed by threats of criminal prosecution.

Just a few days after our meeting, a group called the Polish League Against Defamation announced that it is suing an Argentine newspaper under this law, justifying the concerns we raised. While the law is suspended and pending review by the Constitutional Court, this development troubles us deeply.

Those who attempt to whitewash the past will find themselves entrapped by it, unable to seize a better future. Even if its intent were innocuous — to address inaccurate ascriptions to the Polish state for participating in an official capacity in Nazi crimes — the impact of this type of legislation is dangerous. By codifying a national myth of innocence, leaders are free to indulge in excesses against those painted as oppressors and to ignore their own sins. Meanwhile those who criticize the state face prosecution, imprisonment or worse, as we have seen in increasingly autocratic states like Russia and Hungary. This is not what a healthy democracy should look like. No attempt to explain the nuances of the Holocaust censorship law or the intent behind its adoption will erase our concerns regarding Poland’s suppression of democratic, open discussion.

With an advisor to Polish President Duda insinuating that Jews want a “monopoly” on the memory of the Holocaust, a recent resurgence of anti-Semitism in Poland is not surprising. Here we see the immediate, pernicious consequences that occur when a government legislates a revisionist narrative of history. This is why it is critical that the United States Congress continues to stand up for historical truth and unfettered dialogue about what happened to Poland’s Jews during the Holocaust and afterward.

As Americans and as Poland’s ally, we have a responsibility to make clear that revisionism and censorship is the wrong path. Poland must face the darker chapters of its history in full — just as we must continue to face up to our own history of slavery, segregation, racial injustice and anti-Semitism. Poles ought to be permitted — indeed, encouraged — to engage in frank conversations that reflect the complexity of what occurred during the Holocaust. 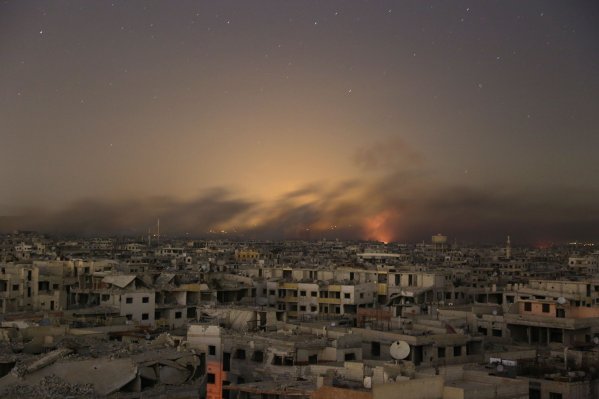 The Syrian Civil War Has Raged for 7 Years. This Is What the U.S. Can Do to Help End It
Next Up: Editor's Pick