Police have recovered the remains of all six victims who died in the Florida International University bridge collapse.

Miami-Dade Police identified three victims as 57-year-old Oswald Gonzalez, 53-year-old Alberto Arias and 60-year-old Rolando Fraga Hernandez. Another victim, identified as Navarro Brown, died at a hospital a short time after the accident, police said, according to the Associated Press.

Brandon Brownfield was identified as the sixth victim by his wife Chelsea Brownfield in a Facebook post on Sunday, CNN reports. Brownfield wrote that she was married to her husband for nearly four years and that they had three daughters. Police have not yet released Brownfield’s name and were not immediately available to comment to TIME.

Authorities said late Saturday that all six people who died from the bridge collapse were recovered. Five people were killed when the bridge fell, while the sixth person died at the hospital, the AP reports.

Police said while they believe all the victims from the bridge collapse were recovered, they would continue the search and rescue.

Three of the victims were found Saturday morning in two vehicles. A third vehicle was extracted from the collapse later on Saturday, though police did not say whether there was a body inside.

Miami-Dade Police Director Juan Perez said the bodies may need to be identified through DNA, fingerprints or photos. Eight vehicles were trapped under the bridge when it fell.

Federal and state law enforcement are still investigating the cause of the bridge collapse after first responders spent hours on rescue and recovery efforts, according to the AP.

Here’s what we know about the FIU bridge collapse:

The new 950-ton bridge to Sweetwater, which was installed at FIU Saturday, collapsed Thursday afternoon onto Southwest Eighth Street — killing at least six people, according to the Associated Press, while several others were hospitalized.

Two people are in critical condition and the other eight victims transported to Kendall Regional Medical Center were being treated for various injuries including “bruises and abrasions to broken bones,” Dr. Mark McKenney said Thursday at a press conference, according to the AP.

Of the two critical cases, one arrived at the hospital in cardiac arrest but was revived, AP reports. The other had a serious brain injury, according to McKenney.

Video posted on social media showed the collapsed bridge with vehicles stuck underneath it.

What are witnesses saying?

Florida International University sophomore Richard Humble was in the car with his friend Alexa Duran, who was killed when the bridge collapsed on the car they were in. Humble told the Miami Herald he was able to get out of the car, but was unable to get Duran out as well.

“We were parked at a red light and I started to hear the bridge creaked so I looked up and I saw the bridge falling on top of us,” Humble said on the Today show. “It fell on the roof of the car and caved in and kind of caved in on my neck and squished me down. I didn’t really know what was going on at all. I screamed her name over and over again, but I didn’t hear anything.”

What caused the bridge to collapse?

It was not immediately clear what caused the deadly collapse.

The Miami Herald reports that the 174-foot-long bridge was installed Saturday with the intention of giving pedestrian access from FIU’s campus to its newer dorms and off-campus housing.

The $14.2 million bridge had been partially assembled by the side of the highway, in order to not obstruct the flow of traffic on the seven-lane highway during construction, and was slated to open in 2019, according to the Herald. But its “innovative installation,” which saw workers move the walkway into place before the main support tower had been installed, was risky, University of California – Berkeley engineering professor Robert Bea told the AP.

Two workers were on the bridge when it fell, Miami-Dade Fire Rescue confirmed, and were conducting a stress test on the unfinished bridge, Miami-Dade Mayor Carlos Gimenez said. Over-tightening steel cables that run through the bridge slab sections can lead the structure to “camber,” or buckle, experts told the Herald.

The bridge was also unusually heavy, employing concrete elements such as trusses and a concrete roof, rather than lighter weight steel, according to Ralph Verrastro, an engineer and expert in accelerated construction projects.

An engineer had left a message two days before the tragic accident warning of cracks in the bridge at one end of the concrete span, the AP reported. However, no one listened to the voicemail until after the bridge collapsed, killing at least six people. In the voicemail, the engineer says the bridge will need repairs, but that they “don’t see that there’s any issue there so we’re not concerned about it from that perspective.”

It has not yet been determined whether any cracks in the bridge contributed to its collapse.

The cables that suspended a newly-installed pedestrian bridge at Florida International University were being tightened following a “stress test” when the structure collapsed Thursday, killing six people and trapping multiple cars underneath, officials said.

Florida Republican Sen. Marco Rubio said on Twitter that the cables suspending the concrete span had become loose and were being worked on when the bridge collapsed.

“This is a tragedy that we don’t want to re-occur anywhere in the United states,” Perez said. “We just want to find out what caused this collapse to occur and people to die.”

Who was building the bridge?

Munilla Construction, one of the companies that worked on the bridge, called the accident a “catastrophic collapse” and promised to conduct “a full investigation to determine exactly what went wrong.”

“MCM is a family business and we are all devastated and doing everything we can to assist,” the company said in a tweet.

Tallahassee-based FIGG, the company behind the striking Tampa Bay Sunshine Skyway Bridge, had also worked on the FIU-Sweetwater Bridge, and said it “mourns the loss of life and injuries associated with this devastating tragedy, and our prayers go out to all involved.”

“In our 40-year history, nothing like this has ever happened before,” the company said in a statement.

But according to AP, the firm was fined in 2012 after a 90-ton section of a bridge collapsed onto railroad tracks in Virginia, injuring several workers. The Virginia Department of Labor and Industry found that FIGG failed to regularly inspect a girder that it had modified without informing the manufacturer, and did not provide adequate training according to a The Virginian-Pilot.

MCM has also been fined more than $50,000 for 11 safety violations over the past five years, according to Occupational Safety Health Administration records.

Gov. Scott clarified that the bridge was a FIU project, not a Florida Department of Transportation project, and that investigations would take place on the local, state and federal levels.

“There will clearly be investigations to find out exactly what happened and why this happened,” Scott said during a news conference Thursday evening. “We will hold anybody accountable if anybody has done anything wrong.”

The Florida Department of Transportation issued at statement distancing itself from the incident Thursday, while the National Transportation Safety Board announced that it was sending a team of 15 investigators , the Herald reports.

Why was the bridge being built?

The bridge project was meant to address concerns about pedestrians unsafely crossing the busy highway.

“This bridge was going to provide a safe transportation for pedestrians to cross between the university and the City of Sweetwater,” said Orlando Lopez, mayor of Sweetwater.

Before its collapse, the bridge had been a source of pride for local officials and the university, which has a specialized “accelerated bridge construction” program at its engineering school and had promoted the groundbreaking FIU-Sweetwater project.

FIU President Mark Rosenberg reflected on the project and said he hoped the bridge could still be a way to “galvanize the community” in hope.

How did officials respond?

In a statement immediately after the collapse, FIU officials said they were involved in ongoing rescue efforts.

“We are shocked and saddened about the tragic events unfolding at the FIU-Sweetwater pedestrian bridge,” a statement said.

Florida’s lawmakers also expressed sympathy for the victims of the collapse and called for an investigation into what led to the incident. At a press conference Thursday evening, Florida Sen. Marco Rubio promised an “exhaustive” investigation, saying family members of those injured and killed in the accident “deserve to know what went wrong.”

“I am shocked and horrified by the FIU Pedestrian Bridge collapse. I am praying for the victims and families of this tragedy,” he said in his statement. 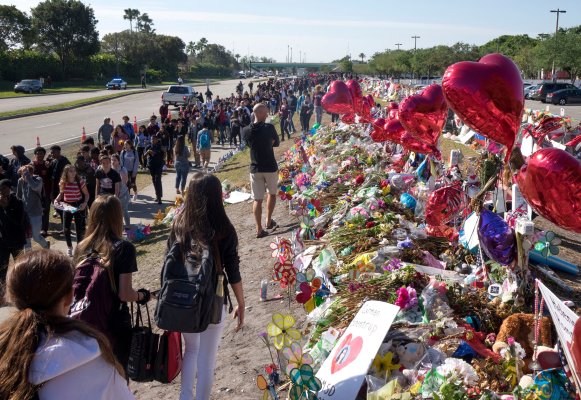 'Some People Have Forgotten, but We’re Still Here.' What the Student Walkout Looked Like in Parkland
Next Up: Editor's Pick