President Trump Pitched Tariffs to Republican Donors. He Was Met With Silence

President Donald Trump speaks to reporters before boarding Marine One on the South Lawn of the White House in Washington on March 13, 2018.
Andrew Harnik—AP
By Alana Abramson

President Donald Trump’s biggest break with Republican orthodoxy is his positions on his protectionist approach to trade, and his attempt to pitch the issue of tariffs during a closed-door meeting with top conservative donors was met with silence.

Speaking in Missouri at a fundraiser for Attorney General Josh Hawley, who is running for the Republican Senate nomination, Trump criticized what he described as unfair trade agreements with the European Union, Japan and China while still describing himself as a “free trader.”

“And then you hear about the free traders. And I’m a free trader,” Trump said, according to audio of remarks obtained by TIME and first reported by the Washington Post. “ I want to be a smart trader. I want to be a fair trader. It’s so unfair what’s happening to our politicians.”

Trump has long criticized trade deals and called for renegotiating them while running for president. In office, he pulled the U.S. out of the Trans-Pacific Partnership, a multi-national pact aimed at countering China; imposed tariffs on solar panels and washing machines; and announced plans for new tariffs on aluminum and steel.

But while those moves have engendered some opposition among conservative advocacy groups and lawmakers — even prompting one economic adviser to quit — Trump has also said that some allies may be exempted from the tariffs and that they may be a negotiating ploy.

He made a similar case to Republican donors in Missouri.

But Trump also slammed free trade agreements, calling NAFTA a “disaster,” as he has before, and highlighting the disastrous effects of trade deficits. At one point, toward the end of his remarks, he said he told Canada’s Prime Minister Justin Trudeau that the United States had a trade deficit with the country, even though he said at the fundraiser that he didn’t actually know.

“He said Donald, we have no trade deficit … I said ‘wrong Justin, you do.’ I didn’t even know,” Trump said of his conversation with Trudeau. (The U.S. actually has a surplus with Canada).

According to the audio, Trump received ample applause from attendees when discussing the increase of resources towards the military and his policy on North Korea and when he said he told China’s President Xi Jinping he was fighting for the United States. There was laughter when he referred to CNN as “fake news.” But when he discussed tariffs and stricter trade policy, the room stayed silent. 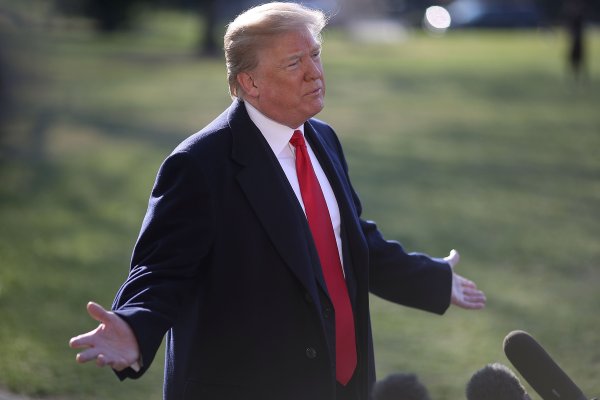 The U.K. Thinks Russia Is Behind the Spy Poisoning. President Trump Isn't So Sure
Next Up: Editor's Pick