When Rachael Ray was mistaken for the “Becky with the good hair” from Beyoncé’s Lemonade album, she may as well have been relaxing with an ice cold glass of the drink —because the jokes didn’t bother her one bit.

“I thought that was hilarious,” the chef told Yahoo! Music of the drama that ensued in 2016. “I guess I looked at that as the most ultimate backward compliment — just the idea that anybody would think that I groove in a universe where I get to hang out with JAY-Z or Beyoncé or all that. To me it was like, ‘People think I’m cool enough to go to places where any of this would happen?’ It was so funny to me.”

Ray was the subject of some social media badgering after the Beyhive mixed her up with Rachel Roy. The fashion designer was thought to be the woman at the center of the JAY-Z cheating rumors—though she denied the claims in an exclusive statement to PEOPLE shortly after the speculation sky-rocketed. Because Ray and Roy’s names are so similar, Beyoncé’s fans quickly started flooding both of their accounts with lemon emojis and negative comments.

Through it all, Ray told Yahoo! that she remained calm—a skill she’s learned after years of fielding her fair share of haters.

“When a weird anomaly comes along like the Lemonade thing, I guess I’m weirdly prepared for it,” she said. “[The hate] doesn’t bother me anymore. It used to hurt my feelings. I used to go home and say, ‘Wow, maybe they’re right. Maybe I should really feel bad about myself.’”

It’s a sentiment she recently echoed on Rebecca Jarvis’ No Limits podcast. “Whether you get liked or not […] I’ve never really cared about that,” she said. “I love me at the end of the day because I did an honest day’s work and I’ve got a solid family and I got my pitbull and I got a sweet husband. I’m good. I’ve never been a person who paid attention to ‘I hate Rachael Ray’, or ‘this person said this’…I don’t care.”

Ray—who will put on her Feedback party at SXSW in Austin for the 11th time on Saturday — also talked to Yahoo! about one of her most famous criticizers: Anthony Bourdain.

“I’ve always loved Tony Bourdain. I think he’s cool as hell,” she said. “I’ve read everything he’s written. Which is kind of weird, because he didn’t for years care for me too much at all.” 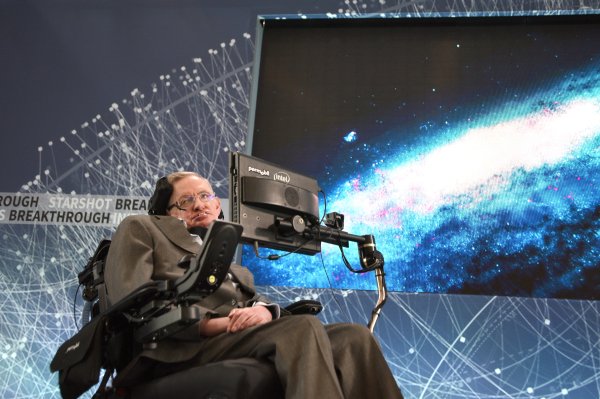 Celebrities From All Realms Are Mourning Stephen Hawking's Death
Next Up: Editor's Pick