In the bleak aftermath of Pennsylvania’s special congressional race the day before, Republicans on Capitol Hill spent Wednesday grumbling about Rick Saccone. The party had stumbled once again: Saccone, nominally their guy, an archconservative Pennsylvania state representative, had failed to had failed to cinch a special congressional election in a district that Trump won by double digits in 2016. And as they saw it, it was on first and foremost on him.

“Clearly one of the messages is that candidates matter,” Sen. John Thune of South Dakota, the Senate’s third-ranking Republican, said on Wednesday.

In all corners of the Capitol, Republicans were fuming: at a poorly chosen candidate they widely condemned as feckless and lazy; but also at a party infrastructure that pumped millions of dollars into the race despite this; and at the burgeoning media narrative that this loss, and the loss of Roy Moore in Alabama’s special Senate race in December, augured the death knell of Trumpism and an oncoming Democratic wave in this fall’s midterm elections.

Mostly, they griped about Saccone. “We got our ass kicked,” Sen. John Kennedy of Louisiana fumed to a CNN reporter. “It’s what the political prognosticators called a good ol’ fashioned ass-kicking.”

On paper, the 60-year-old conservative was a logical pick to succeed Rep. Tim Murphy, the Republican congressman who held the district’s seat for nearly fifteen years before resigning in October in the face of allegations of marital infidelity. (Adding insult to injury, the vocally pro-life lawmaker had allegedly encouraged his mistress to get an abortion.) Like Murphy, the portly, mustachioed Saccone was far to the right on social issues, with an aw-shucks air that one would think would play well with the blue-collar base in southwestern Pennsylvania. (His Democratic opponent, Conor Lamb, meanwhile had more of a patrician background with two Ivy League degrees and a family with long ties to the political establishment.)

But as Lamb surged, largely because of his pro-labor appeal to unions in the region, Saccone proved to be something of a dud. Throughout the election, national party leaders had to repeatedly scold the candidate to be more active — read: less flat — in campaigning. In the final weeks of the race, Republican leadership pumped millions of dollars into advertising for Saccone, and dispatched both President Donald Trump and son Donald Jr. to the campaign trail. It was a misplaced strategy: the frenetic energy of both Trumps only proved to underscore Saccone’s doldrums. At a recent visit to a local candy store, Trump Jr. hammed with employees and played to the camera, while Saccone mostly trailed behind in silence.

“The assumption that you can win an election with less than ideal candidates — that’s just not something that happens a lot,” Rep. Mario Diaz-Balart, a Florida Republican, said on Wednesday. “Does this result, or the Alabama result before that, affect [someone else’s] district? Of course not. It’s race by race. But clearly you have to have candidates that are good candidates, and if not, it’s going to be a long day.”

He was not a good candidate, Pennsylvania politicos agree. Murphy had been well-suited to the region — a social conservative who nevertheless was a staunch supporter of labor — but he departed his office “in disgrace,” one political operative with experience in Pennsylvania says. “It’s not like he was leaving the Republican brand in great shape.” Thus the matter of finding a potent replacement was even more sensitive — and it proved to be a missed opportunity.

“Nobody wanted him in that race,” the operative says of Saccone. “I’m surprised he got the nomination. He’s not dynamic. He’s way to the right on economic issues. He had people’s heads turning.”

But in the wake of the election, Republicans in Washington resented the implication that it necessarily means their party is doomed.

“I don’t think it’s a national movement or whatever,” Rep. Roger Williams, a Texas Republican, told TIME. “A national movement would have been Texas going blue. You had a combination of a candidate on the Democratic side who was really getting after it, and another one who — had a different style. The Democrat raised a little bit more money, and it’s a game of money.”

In any event, Republicans concede that such a drastic loss in a district that has gone reliably for their party in recent years, at least in national contests, warrants a bout of self-reflection ahead of the November midterms. Already top party operatives and fundraises are steeling themselves for a brutal election season. Democrats need to win just 24 seats in the House to cinch the chamber’s majority, and they have two gusts of wind in their sails: the historical tendency for the president’s party to lose seats in the first midterm contest after his election, and the particular unpopularity of this president, many of whose supporters are increasingly disaffected.

“This is a wake-up call,” Rep. Steve Stivers, the Ohio Republican who chairs the body that oversees House Republican campaigns, snarled at his colleagues in a closed-door meeting on Wednesday. “Wake up.”

“It should be a wakeup call for conservatives and Republicans,” Williams agrees. “Look, nobody likes to lose. But every now and then, in sports or in business, there’s an event that happens that reminds you to get back to the basics. And the basics for us are lower taxes and less government.” 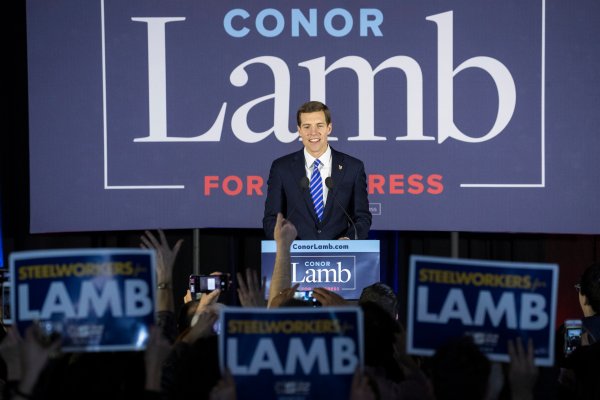