Stephen Hawking's Legacy Spans the Universe — Both Within and Beyond Us

Ideas
By Lisa Randall
Randall, a Time 100 honoree, is Frank B. Baird, Jr., Professor of Science at Harvard University and the author of Dark Matter and the Dinosaurs: The Astounding Interconnectedness of the Universe.

For years, the best way to establish my place in the physics world with people outside of physics was to tell about the time Stephen Hawking saved me a seat. I was at a conference in the early 2000s and had done some work that he was following. When I showed up late to a dinner, a physicist pulled me aside to be seated next to Stephen’s place. On this fortunate evening, I got to know him a bit better — hearing his thoughts on science, his jokes and his observations. But to tell the truth, probably the most fascinating part for me was simply understanding how he functioned and communicated despite all the obstacles. He would painstakingly work through his letters and words (happily I could see my name among them) to construct sentences and when they were complete everyone paused to engage. The man had a good time — and clearly it was a decision on his part to do so.

In our incredible, challenging-to-explain universe, it seems almost inevitable that it was an incredible, challenging-to-explain person who made it more comprehensible — both to the scientific community and to the public. Whether people agreed or disagreed with his latest pronouncements on physics, on AI or the fate of the Earth, one thing that everyone agrees on is how impressive were Stephen Hawking and his accomplishments, never mind his very survival.

The story is well known. A promising physicist who in his early years gets a diagnosis that many interpret as an imminent death sentence — ALS — a disease that a doctor friend of mine describes as one of the worst anyone can suffer. Everything stops working except your brain, which goes on as sharply (or fuzzily for some) as ever. Hawking showed us why this disease can be far from the worst. A functioning brain coupled with what little of his body survived — less and less over time — was enough for this formidable individual to have a life far more active than that of most able-bodied individuals and a life of the mind that exceeded others’ by many multiples.

Stephen Hawking came into the public eye primarily through his book A Brief History of Time, published in 1988. It never was quite clear what was responsible for the book’s oversized popularity — the wonderfully clever title, the material itself, the way it was written or the person in the wheelchair who explained things so well — but the fact is that millions of copies were sold and Stephen Hawking became synonymous with genius and physics research. He also became the conduit through which many people learned about advances in physics and became excited about them.

But Hawking wasn’t just the over- or undersized person (depending on how you look at it) who was familiar to viewers of The Simpsons, The Big Bang Theory, to attendees of his many lectures or to readers of his books. He was a major scientific figure whose contribution to our understanding — particularly of black holes — both advanced our understanding and laid bare the mysteries that forty years later are still daunting. They are questions related to deep and significant questions such as where information goes and how causality survives in the process. If most people can’t begin to answer them, Hawking helped everyone at least approach them and with his bets, pronouncements and research, lure them to greater achievements.

In addition, he is responsible for formal mathematical advances I can’t describe fully in this short space concerning singularities — where spacetime breaks down — and the wavefunction of the universe. He also played an important role in the physics community’s understanding of the fluctuations in density that give rise to the structure of the universe.

Hawking’s personal universe had a complexity of its own. He had two wives, three children, explored the world in ways most people don’t — going down a mine shaft, traveling in a submarine, visiting the south pole and going up into zero-gravity. He was clever, witty and had a zest for life, along with many of the more annoying features that physicists deservedly are reputed to have.

My chief concern about Hawking’s influence is that people will think you have to be so disadvantaged to participate fully in the life of the mind. Science is not part of a separate world; it is integrated fully into all our lives and is available for anyone to participate. His contributions should be an inspiration, not an excuse to turn away from the challenges of science. But with his many accomplishments, he certainly lays down the gauntlet.

Even near the end, Hawking kept pushing to add to his body of research. I got to know him when he did work on black holes, related to the geometries that Raman Sundrum and I had studied, and more recently when he worked on fundamental questions about black holes with another Harvard colleague.

There are many who worked more closely with Stephen than I, and all of them have nothing but admiration for him. To carry on despite the odds and to do work that would be widely recognized even without Hawking’s handicap is indeed a model for us all. His enjoyment of people and desire to be with them, to share his insights and fight for science will be missed. It is now up to us all to ensure that his legacy of inspiration, science communication and science itself thrive and survive. 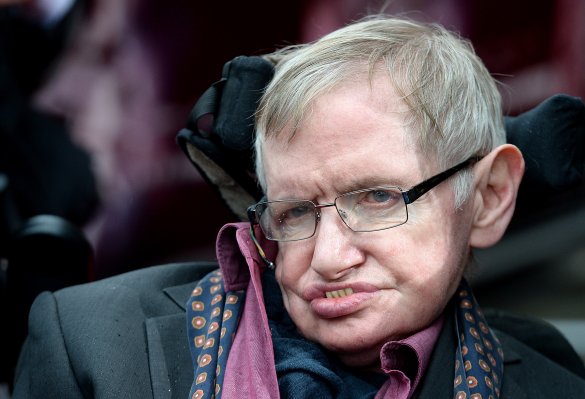 Stephen Hawking Was an Atheist. Here’s What He Said About God, Heaven and His Own Death
Next Up: Editor's Pick