Many students in the Northeast were undeterred by school snow days on Wednesday, trudging through snow and freezing temperatures for a national walkout to demand action to stop gun violence.

Hundreds of students in Massachusetts — where many schools were closed Wednesday due to two feet of snow — marched to the statehouse in Boston anyway, chanting, “We are here, and we want change.”

“Rain, sleet, or snow, WE GO ON! See you in Boston,” the advocacy group Students Against Gun Violence said in a tweet Tuesday, ahead of the protest. And students listened.

“We’re just really passionate about this issue,” Rachel Cosgrov, a junior at Waltham High School, which was closed Wednesday, told Patch. “A lot of people were talking about it, but we wanted to take action about it.”

The nationwide walkout comes a month after 17 students and teachers were killed in a shooting at Marjory Stoneman Douglas High School in Parkland, Florida. Since then, survivors of the Parkland shooting have become vocal advocates for gun control. Students — and teachers — across the country have joined them. Wednesday’s walkout was one of several planned protests over the issue.

Schools in Portland, Maine, were shut down on Wednesday, so about two dozen students rallied downtown instead, calling for gun control during an impromptu protest in the snow.

“You can’t tell yourself you can’t change anything when everyone knows you can,” said Hannah Smart, a seventh-grade student at Portland’s King Middle School, addressing lawmakers in remarks reported by Portland Press Herald. “Every day you make excuses. Your apology won’t cut it. Actions speak louder than words.”

The Portland public school district has rescheduled Wednesday’s walkout to take place Thursday morning during school hours. Other schools have also opted to hold walkouts on another day.

Greta Holmes, another Portland seventh grader, told the Press Herald she’s been inspired by the Parkland students to take action: “If we do nothing, more students will die.” 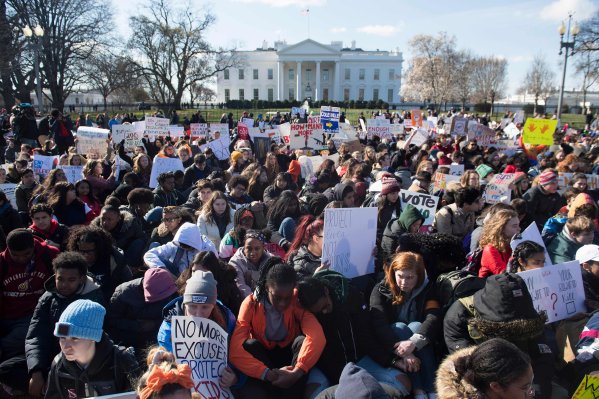 Thousands of Students Walked Out of School Today in Nationwide Protests. Here's What You Should Know
Next Up: Editor's Pick