The U.K. Thinks Russia Is Behind the Spy Poisoning. President Trump Isn't So Sure

U.S. President Donald Trump answers questions from the media after the firing of Secretary of State Rex Tillerson before departing from the White House on March 13, 2018 in Washington, DC. President Trump is traveling to California to view prototypes of a proposed border wall.
Photo by Mark Wilson—Getty Images
By Tessa Berenson

Even as the U.K. pushed ahead with retaliatory measures against Russia over the poisoning of a British spy, the Trump Administration held back its assessment of Russia’s guilt.

President Donald Trump and other White House staffers have said they stand with the British over concerns about the poisoning of Sergei Skripal and his daughter, but for days their wording was more equivocal than British Prime Minster Theresa May’s.

On Monday, May said her government concluded it was “highly likely” Russia was behind the attack and demanded a response from the Kremlin. (Moscow has denied any involvement in the incident.) Later that day, White House Press Secretary Sarah Sanders called the attack “reckless, indiscriminate, and irresponsible,” but declined to name Russia as the likely perpetrator.

“Right now, we are standing with our U.K. ally,” she said, when pressed at the day’s press briefing on whether the U.S. agrees with Britain about Russia. “I think they’re still working through even some of the details of that.”

On Tuesday, Trump echoed Sanders’ line, saying he stands with Britain but refusing to unequivocally support its assessment on Russia. “It sounds to me like it would be Russia based on all of the evidence they have. I don’t know if they’ve come to a conclusion,” Trump said outside the White House. “As soon as we get the facts straight, if we agree with them, we will condemn Russia or whoever it may be.”

Experts on the “special relationship” between Britain and the United States note that the two share intelligence information, making it striking that Trump would imply the U.S. might not agree with its conclusions or that it might not have its “facts straight.”

“It is unusual — and disappointing from the British perspective — for the President not to publicly back the British assessment, especially on such a sensitive issue,” says Rory Cormac, associate professor of international relations at University of Nottingham. “It perhaps raises questions about how much he trusts British assessments, which the U.K. must feel are fairly conclusive otherwise Prime Minister May wouldn’t have gone public so quickly.”

One exception is Secretary of State Rex Tillerson, who more forcefully condemned Russia in language that echoed May’s on Monday, saying the nerve agent used, Novichok, “clearly came from Russia.” But Tillerson and the White House often contradicted each other over his 14 months at the State Department, and hours later, Trump announced in a tweet that he was firing Tillerson.

“It is unusual that a (now former) Secretary of State would publicly state that the Novichok attack ‘clearly came from Russia’ but the White House would be unable to make a similar determination,” says Heather Conley, director of the Europe Program at Center for Strategic and International Studies. “Both the State Department and White House would have access to the same information.”

This isn’t the first time that Trump has been muted in his language about Russia. The U.S. intelligence community has unanimously agreed that Russia attempted to influence the 2016 election, but Trump hasn’t always sounded as sure. In 2017, he said, “As far as hacking, I think it was Russia. But I think we also get hacked by other countries and other people.” And then after meeting with Russian President Vladimir Putin, he said he believed Putin saying Russia didn’t do it. “I believe, I really believe, that when he tells me that, he means it,” Trump said.

The special relationship between the U.K. and the U.S., which relies on intelligence sharing, engenders “a degree of trust shared with no other allies to the same extent,” says Tim Oliver, associate at LSE IDEAS, the foreign policy think tank at the London School of Economics and Political Science. “It’s why it’s usually protected from such vagaries as presidential-prime ministerial relations. Trump, however, is testing that trust in ways we’ve never seen before.”

The White House said Trump spoke directly with May on Tuesday. According to a readout of the call, Trump “stated the United States stands in solidarity with its closest ally” and “agreed with Prime Minister May that the Government of the Russian Federation must provide unambiguous answers regarding how this chemical weapon, developed in Russia, came to be used in the United Kingdom.”

Even if the White House agreed with Britain behind the scenes, Trump could still hedge publicly for political reasons. “The intelligence relationship and the political representation of that relationship,” says Cormac, “are two different things.”

But on Wednesday, May upped her rhetoric even more, after she didn’t receive any such answers from Moscow. After expelling nearly two dozen Russian diplomats from her country and severing some diplomatic contact with Russia, May said Russia hadn’t provided any explanation for the attack, so “there is no alternative conclusion other than that the Russian state was culpable for the attempted murder of Mr. Skripal and his daughter.”

After days of saying the U.S. government supports Britain but refusing to take a firm stance on its intelligence, Trump and his staff faced more pressure to censure Russia.

“Where Prime Minister May has taken bold and decisive initial action to combat Russian aggression,” Senate Democratic leader Chuck Schumer said in a statement Wednesday, “our own president has waffled and demurred.”

Then, Wednesday evening, the White House put out a new statement: “The United States shares the United Kingdom’s assessment that Russia is responsible for the reckless nerve agent attack on a British citizen and his daughter.” 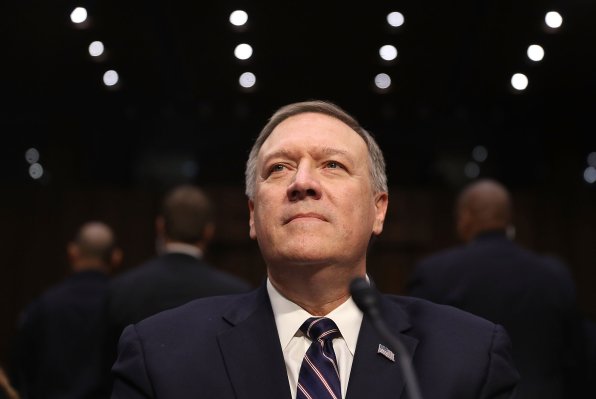 Who Is Mike Pompeo? What to Know About the Next Secretary of State
Next Up: Editor's Pick