Haven't Picked Your March Madness Bracket Yet? This Simulator Can Help

The madness is upon us—not only of the March variety, but also the peculiar hysteria that besets the millions of Americans who pore over their tournament brackets.

The tournament begins in earnest Thursday, after the 64 teams are cemented with the final two play-in games. It’s not too late to fill out a bracket. And we can help.

The following interactive allows you to choose a strategy and pit it against automated opponents in 1,000 rapid-fire simulations. As the simulations run, you’ll see your profits rise or your losses pile up. We’ve even added the option of downloading a randomly generated PDF of your complete bracket based on the strategy you chose.

There are four strategies:

Here’s how it works: For each simulated contest, the machine randomly chooses one of the 33 years’ worth of historical results since the tournament expanded to 64 teams in 1985. It then applies both your strategy and the computer’s to all 63 games based on the initial seeding. (Given that a 1 seed has never lost to a 16 seed in 132 matchups, we comp that one to both you and the computer. So you’re actually only guessing 59 games.) It then uses the random number generator in your browser to rapidly evaluate each bracket’s score using a default scoring system, which doubles the points awarded for correct picks each subsequent round, usually from 1 point for an accurate first-round pick to 32 for getting the final game right. (ESPN awards 10 points to start and climbs to 320 points, which is the same thing. Just more affirming.)

As you might have noticed, your winnings or losses depend mightily on the number of people in your pool—though not quite as you might expect.

Regardless of your strategy, you’re much more likely to win a pool against a small number of opponents. Makes sense: Even if all of your opponents are flipping coins, the odds that one of them will get freakishly lucky improve as the size of the pool expands.

But so does the payoff. For a $5 pool, you can win $20 against four opponents after recouping your five bucks. For a pool of 100 other people, you will win much less often, but take home $500 each time you do.

Curiously, over time it is much better to play the long game and compete against the largest pool available. If you chose the simplest strategy and always picked the higher seed up in every game until the Final Four, you will win about two-thirds of the time against 15 people who are flipping a coin for each game. In a $5 pool, your expected payout would be roughly $50,000 over the course of 1,000 tournaments.

Ramp up that competition to 100 opponents and the expected payout rises dramatically. While your odds of winning a single bracket drop to about 25%, you are nearly certain to win north of $100,000.

Of course, this assumes two things that are not real-world scenarios: That you can find a pool of 100 other people who are all choosing their brackets at random—and if you can, let me know!—and that your life expectancy is over a millennium (or you have 1,000 junk Yahoo accounts and can find 1,000 such pools in a given year. And a lot of spare time.)

So what does this mean for one year? Given that a loss will only cost you the entrance fee regardless of the size of your pool, it’s better to play against more people. As for strategy, the best move is generally to fall back on the seeding. Whether by luck or design, the Selection Committee has a good track record of awarding higher seeds to better teams, even when they snub teams that probably deserved a berth.

I believe this is a hopeful lesson. It’s easy to feel defeated when playing against people who have paid a great deal more attention to college basketball. But single-elimination tournaments are cruel. Every unexpected upset can upend even the wisest player’s entire bracket, as you may have gathered from the banshee’s wail of the defeated on Facebook as the tournament progresses. Given that your potential points double each round, you can sneak in a win by hanging on to a few teams that go deep, even if your first round looked like a disaster.

Yes, that is my advice: Be boring and choose the obvious answers. It may not work this year, or next year, but those are the best odds that you’ll come out ahead in the long run, even if your outlook is decades, not centuries. That’s the bounty of a high-stakes tournament played by unpredictable teenagers.

Interactive inspired by the Los Angeles Times Powerball simulator by Jon Schleuss (inspiration conducted with permission). The random number generator in Javascript is more random in some browsers than others, though this has little bearing on the results. I’ll post the source code once it’s tidied up. In the meantime, comments and questions and compliments can reach me at chris.wilson@time.com. Complaints that you didn’t win your pool can be posted by certified mail to TIME’s Siberia bureau. 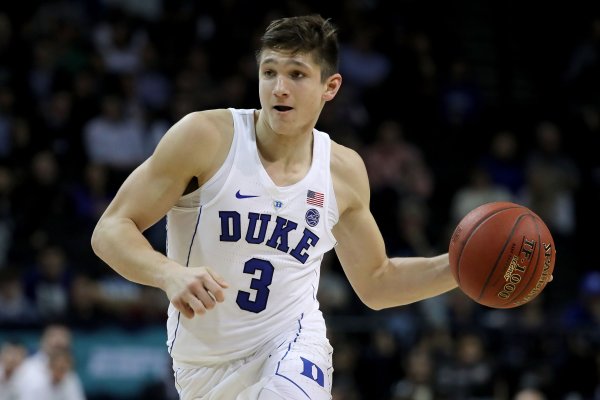 6 Irresistible March Madness Storylines to Watch
Next Up: Editor's Pick