Donald Trump Jr. has a habit of going viral, whether it’s for Twitter typos that become “dank” memes, or for his latest photo opp with an unexpectedly inquisitive chocolate bunny.

Trump Jr. was visiting Sarris Candies, a candy factory in Canonsburg, Pennsylvania, during a campaign stop, when a well-placed journalist snapped a photo of him apparently giving an in-depth interview to a group of life-sized chocolate bunnies.

Andrew Rush, a journalist for the Pittsburgh Post-Gazette, posted the photo on Monday, Tweeting: “This is the danger of campaigning at a candy factory”.

The image has, inevitably, taken off on social media. See a selection of the takes below.

Later on Monday, Trump Jr. addressed the meme with a Tweet of his own, retweeting Rush’s original Tweet and quipping: “The chocolate rabbit gave a hard hitting interview and was delicious afterwards.”

The President’s eldest son was visiting Sarris Candies alongside Rick Saccone, the Republican congressional candidate for the special election in Pennsylvania’s 18th District on Tuesday.

Last month Trump Jr. tweeted out a typo that seemed designed to go viral, when he misspelt “darkness” as “dankness”, as he attempted to refer to the Washington Post slogan “Democracy Dies in Darkness”. 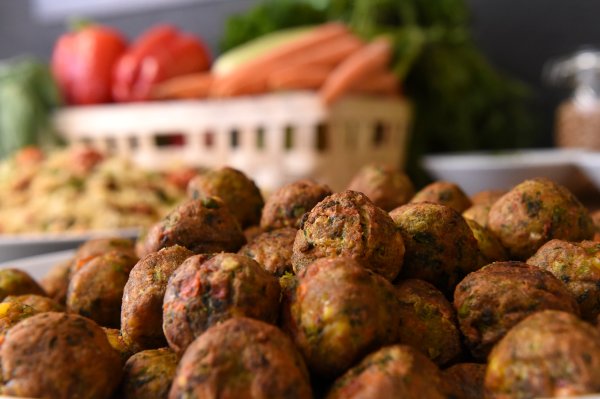 Don't Bug Out But Ikea Is Working on 'Mealworm Meatballs' and 'Bug Burgers'
Next Up: Editor's Pick