A girl looks out of her tent in the Balukhali refugee camp in Cox's Bazar, Bangladesh on Jan. 17, 2018. U.N. fact finders have pointed to the role that hate speech on social media has played in fueling anti-Rohingya sentiment and violence in Myanmar.
Allison Joyce—Getty Images
By Eli Meixler

A U.N. fact-finding mission has highlighted the role of social media networks, and Facebook in particular, in fueling hate speech against the Rohingya minority in Myanmar, telling the U.N. Human Rights Council this week that “incitement to violence” is “rampant” and “unchecked.”

Reuters reports that in an interim submission to the U.N. Human Rights Council, fact-finding mission chair Marzuki Darusman emphasized the “determining role” of social media networks in the conflict, which he said “substantively contributed to the level of acrimony and dissension and conflict” in Myanmar. “As far as the Myanmar situation is concerned, social media is Facebook, and Facebook is social media,” Darusman told reporters.

The three-member probe, which was established last March to investigate allegations of human rights abuses against ethnic minorities in Myanmar’s Rakhine, Shan, and Kachin States, has conducted hundreds of interviews with refugees in Bangladesh, Thailand, and Malaysia that yielded “hundreds of credible accounts of the most harrowing nature,” Darusman told the Human Rights Council on Monday. The panel has repeatedly been denied visas to visit Myanmar.

U.N. special rapporteur for human rights Yanghee Lee also submitted a report to the Human Rights Council this week, warning that violence against the Rohingya bore “the hallmarks of genocide,” and expressing concerns over “high levels of hate speech and incitement to hostility, discrimination and violence, particularly on social media.”

“I’m afraid that Facebook has now turned into a beast,” Lee told reporters.

Over 671,000 members of the Muslim Rohingya minority have fled Myanmar’s western Rakhine state for neighboring Bangladesh since Aug. 25, many bearing tales of atrocities committed by Myanmar’s military, including executions, gang rapes, and the razing of homes and villages. Last year, medical humanitarian group Médecins Sans Frontières said that at least 6,700 Rohingya were slain in Rakhine by “the most conservative estimations.”

Myanmar argues that its “clearance operation” is a counter-insurgency in response to deadly attacks by Rohingya militants, and last week demanded the U.N. provide “clear evidence” of atrocities against the Rohingya.

U.N. High Commissioner for Human Rights Zeid Ra’ad al-Hussein had previously voiced “strong suspicions that acts of genocide” are being perpetrated against the Rohingya, stepping up rhetoric from previous accusations of “elements of genocide” and “ethnic cleansing.”

The military is also razing abandoned Rohingya villages and building military bases and infrastructure in their place, according to a report released this week by Amnesty International, raising concerns that mass graves and other evidence of atrocities will be destroyed, Darusman said.

Facebook, which has come under considerable criticism over its use in Myanmar, has made some efforts to stem the spread of hate speech and propaganda on its platform, working with local NGOs to enforce its community standards and promote tolerance. Last month, the network suspended the page of firebrand ultra-nationalist monk Wirathu, who recently emerged from a one-year public preaching ban to claim that Rakhine was experiencing “terrorism of Bengalis,” a slur that implies the Rohingya are indigenous to neighboring Bangladesh and are merely interlopers in Myanmar.

Wirathu dismissed Facebook’s reprimand, saying he would “rely” instead on Twitter and YouTube to continue his “nationalist work.” 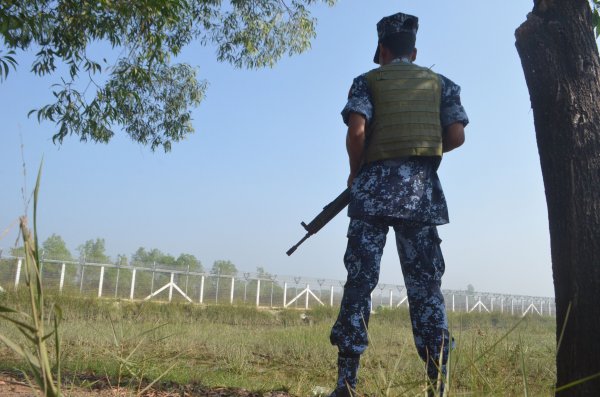 Myanmar Is Building Army Bases on Torched Rohingya Homes
Next Up: Editor's Pick