In the era of Czar Nicholas I, Crimean wine was treasured by Russians as the best in the empire. Now those bottles are making their way back to the Kremlin’s cellar.

“Crimea was the jewel in the Russian wine crown when it first belonged to Russia,” Jancis Robinson, co-author of the World Atlas of Wine, told TIME.

And now that that jewel has been taken back, it’s getting the star treatment. Russia’s annexation of southern Ukraine has seeded a new opportunity for Crimean winemakers. Wineries are optimistic that the change in political leadership will help their businesses. Not too long after Russian troops arrived in the region, government officials began asking retailers to promote Crimean wines in their stores. Last week, Prime Minister Dmitry Medvedev said the government would support the Crimean wine industry in his plan for the region’s economic overhaul.

While Ukrainian and Russian wines are well-known in their immediate area, “almost none of these wines reach the U.S., and most that are seen here are in local ethnic markets,” says Christy Canterbury, one of 312 Masters of Wine, a group of international wine professionals. In 2011, 26.7 million liters of wine were produced worldwide, 225,000 of them in Ukraine and 575,000 in Russia. Those bottles have little presence outside Eastern Europe, and many nations whose production levels fall in between—Brazil, Austria and New Zealand for example—are much better-represented on international shelves and menus.

Many of Crimea’s vineyards were previously state-owned, and the operators hope to regain control of their businesses under the Russian government. So far, the push seems to be helping: a Russian chain called Dixie, one of the country’s biggest retailers, has reported that their sales of Crimean wine have nearly doubled in just a few weeks. They now make up 15 percent of the chain’s sales—an increase from 7 percent of total sales prior to the annexation.

Crimea’s wine has long garnered respect in the region. Several vineyards like Massandra and Novy Svet have been operating for over a century, producing sweet and fortified wines in the French style. The local wines have even impressed French film star and oenophile Gérard Depardieu (who became a Russian citizen himself last year). The prolific actor reportedly purchased several vineyards south of Simferopol—which sits on the same latitude as famed French wine region Bordeaux—in 2012.

It would be tempting to think that increased access to a nation renown for its vodka consumption would mean little for Crimean vinters, but Russia’s drinking habits appear to be changing course. Since 2000, Russia has doubled its wine consumption, making it the fastest growing market worldwide. (In March, Modern Farmer reported on the developing Russian wine scene.)

Russia’s new sales push is not the first time the country has mixed politics and wine. In 2006, the Kremlin imposed embargoes against Moldova and Georgia, much older grape-growing regions, and the countries’ winemakers suffered. The Russian government pointed to public health concerns, saying the wines were tainted by heavy metals and pesticides, but many thought politics was afoot (Russia has battled with both countries over their borders). Georgian wine has been welcomed back to Russia’s shelves, but the Moldovan ban was re-upped in 2013 after the country showed continued cooperation with the E.U.

What access to millions of new Russian consumers means for the long-term future of Crimean wine remains to be seen. Being shut out from the Russian market actually improved the quality of Georgian wines as the embargo forced vintners to sell in the more competitive European and U.S. markets, says Barnard College political scientist Kimberly Marten, an expert on the region. Without the bulk orders from Mother Russia, where plonk had beat out the good stuff, Georgian winemakers had to up their game and start producing a finer product.

Crimean vintners likely won’t be pushed to compete the way Georgia now has—much less its E.U. member-state neighbors to the west, Hungary and Croatia. Those countries’ smaller-scale, farm-driven craft wines are gaining recognition from major sommeliers in the U.S. Instead, Crimea’s crop will likely line Russian liquor shelves and winemakers will get the sales they need now to keep their businesses alive.

“The politicized Russian market might give Crimean winemakers an immediate boost in sales,” Marten says, “but at the expense of their long-term competitiveness, if they don’t have to meet European and U.S. production standards or consumer tastes.” 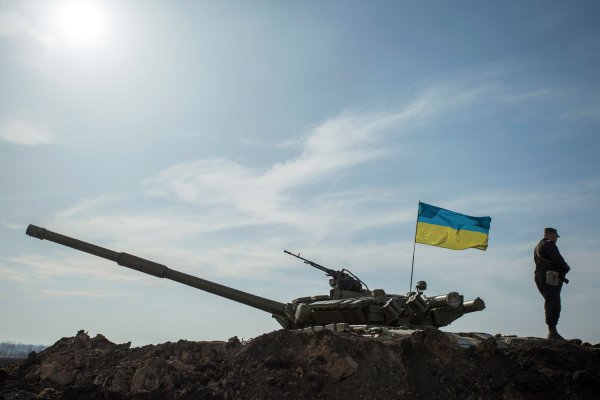 U.S. Intelligence: It's Looking More Likely That Russia Will Invade Ukraine
Next Up: Editor's Pick