Bono Apologizes Over Reports of Bullying and Harassment at His Charity

Bono, singer of U2 and cofounder of the NGO One, delivers a speech after his meeting with French President Emmanuel Macron (not pictured) during a press conference at the Elysee Palace on July 24, 2017 in Paris, France.
Nicolas Kovarik/IP3—Getty Images
By Kate Samuelson

Bono has apologized after the anti-poverty charity he founded in 2004 came under fire for allegedly subjecting staff to a “toxic” culture of bullying and abuse in its South African office.

“We are all deeply sorry… I hate bullying… can’t stand it,” said the U2 frontman in a statement acquired by TIME. The statement was circulated as British tabloid The Mail on Sunday published details about a string of incidents concerning the singer’s ONE charity, including allegations that it failed to pay taxes, despite its campaigns against tax evasion.

The newspaper’s report claimed that the charity’s former executive director of the Africa team intimidated staff members into “massaging her feet,” made demands of other workers outside of work hours — at 1 a.m. in one instance — and “ordered a worker to find her a greyhound puppy, then drive to another city to collect it.”

It also stated that a married former employee felt pressured to have sex with a member of the Tanzanian Parliament, which left her feeling “haunted.” Another former employee told the paper that she left ONE “a broken woman” after a “daily drip-drip of abuse” from bullying phone calls to public criticism.

Although the charity said it could not corroborate some of the claims in the article, including the claim concerning the Tanzanian MP, Bono’s statement admitted that “the head office failed to protect those employees.” He added: “I need to take some responsibly for that. In fact if they would agree, I would like to meet them and apologise in person.”

Another statement written by Gayle Smith, who joined ONE as CEO and president in March 2017, apologized to former employees and stated that “this kind of behavior will never again be tolerated” at the charity. A spokesperson from Britain’s Charity Commission said they were working to ensure that staff at ONE are “properly protected.”

The nonpartisan charity, which was co-founded by Bono and other activists, is working to end extreme poverty and preventable disease in developing countries around the world, particularly in Africa. It has teams in eight countries, including in New York, Berlin, and Abuja. 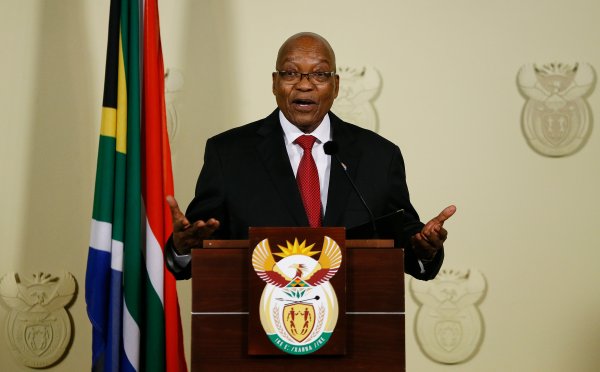 Jacob Zuma Is Gone. Here's What South Africa Has to Do Next
Next Up: Editor's Pick