In the popular narrative, this is what we’ve come to call Trump Country. Greene County, a small, hilly parcel of land in Pennsylvania’s southwestern corner, sits on one of the largest coal seams in the U.S., yet has seen nine of its 12 mines close in the last decade. “All we’ve got here is Walmart and the prison,” says 70-year-old Jim Rawlings, a retired coal miner. The people here, 94% of whom are white, feel forgotten by Washington. Nearly 70% of them voted for President Donald Trump in 2016, impelled by his populist fervor and his promise to restore greatness to these left-behind American hinterlands.

So it was somewhat startling to see more than a hundred members of the local coal miners’ union at the county fairgrounds on Sunday, whooping and cheering for a 33-year-old Democratic attorney named Conor Lamb. Lamb, who has two Ivy League diplomas and the bearing of a model in a Vineyard Vines catalogue, is the Democratic candidate in Tuesday’s special election here to replace Rep. Tim Murphy, the Republican congressman who resigned in disgrace last fall after it was reported that the anti-abortion lawmaker had an extramarital affair and asked his mistress to get an abortion.

In normal times, this election in Pennsylvania’s 18th congressional district should be an easy win for the Republican candidate, state representative Rick Saccone, an outspoken conservative who once described himself as “Trump before Trump was Trump.” And yet, Lamb and Saccone are locked in a surprisingly tight contest.

A moderate Democrat who has eschewed talk of social issues, Lamb has outraised Saccone and earned the backing of powerful local unions. “You all built this country,” Lamb told the group of largely retired miners at Sunday’s rally. “You left it here for us to take on in the next generation. We are ready to step up and lead, and we will keep the promises that we’ve made.”

Lamb is something of a paradox. He is the dauphin of an old Pittsburgh political family who graduated from the University of Pennsylvania and its law school, only to eschew the white-shoe firms of Manhattan for a stint as a military lawyer in the Marines. After prosecuting military cases in Okinawa, Japan, he returned home to serve as an Assistant U.S. Attorney, devoting much of his efforts to tackling illegal drugs, particularly opioids. (Pennsylvania had the fourth-highest overdose rate in the country in 2016, according to the Centers for Disease Control and Prevention.)

At a moment when the Democratic Party is shifting leftward, his politics are meticulously middle-of-the-road. He’s not in favor of a ban on assault rifles. He’s for Trump’s tariffs on steel and aluminum. He has distanced himself from the House Minority Leader Nancy Pelosi, stating that he won’t support her as the Democrats’ House leader if he wins.

While Trump won Pennsylvania’s 18th congressional district by more than 19 points in 2016, the four counties in the state’s southwestern corner have nearly twice as many registered Democrats as Republicans. Outside of Pittsburgh, many of them are blue-collar workers nostalgic for the progressive labor-oriented politics of Roosevelt and Johnson.

But in the last two decades, many of these workers said, the party lost its way. “The Democrats got to be a lot like Republicans, because of money,” 64-year-old Barry Cox says, standing outside the hall at the fairgrounds where Lamb was about to speak. It’s just a couple of degrees above freezing, and he’s passing time with two old friends who worked in the same mine. They’ve all retired; the mine has closed.

The special election has been treated in the media as a referendum on Trumpism: these voters, according to the narrative, are the disenchanted Democrats who spurned their party for Trump in 2016. I asked them about this phenomenon, and they said that the reality was more complicated.

“I voted for Clinton but held my nose,” 73-year-old Carl Wade says. “I never liked Bill Clinton, and I don’t like Hillary Clinton. I can understand why labor voted for Trump, because he’s a false prophet. He told them what they wanted to hear.”

The contempt for Trump was palpable from many of the miners at the rally. He had been in the district the night before to stump for Saccone, though his remarks quickly careened into a meandering exercise in self-promotion. “He’s no labor guy,” Rawlings scoffs. “He came up here yesterday and told people he saved the Rust Belt and was going to reopen the steel mills. How in the hell are you going to open the steel mills and pollute the world — I mean, we’re fossils. We’re something of the past. It’s time to move on.”

And yet there is a sense that many are legitimately hopeful about Lamb, who, if elected, would be the first Democrat to represent the district since 2002. (The sickle-shaped district will not exist in its current geographical form after this year; the Pennsylvania Supreme Court ruled in January that the state’s gerrymandered congressional map discriminated against Democrats.) Lamb would be one of the first victories in what many have described as the imminent “Democratic wave” in this fall’s midterm congressional elections. But perhaps more critically, it could mark a potential upending of the Democratic status quo in Washington.

“It’s about time that Democrat candidates get back to our roots,” says Pennsylvania Rep. Pam Snyder, a Democrat in the state legislature. “These are our roots. This is who we are. The middle class in this country is built on the backs of labor unions.”

And is Lamb an heir to that?

“I haven’t been this excited about a congressional election in years,” she says. “This guy is the real deal. I believe that with every fiber of my being.” 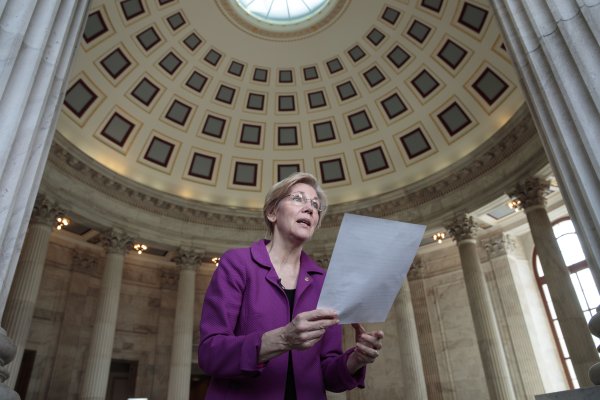 Why 'Nevertheless, She Persisted' Is the Theme for This Year's Women's History Month
Next Up: Editor's Pick