Saturday Night Live took on the Trump administration once again this weekend, with This is Us star Sterling K. Brown playing housing secretary Ben Carson and Kate McKinnon playing special counsel Robert Mueller as “the Bachelor.”

The cold open parody of the The Bachelor forces Mueller to admit that he’s just not ready for a committed relationship: “I’m trying to be honest with you and tell you that I can’t commit to collusion right now,” McKinnon tells a devastated Cecily Strong, who plays Becca Kufrin — the contestant who real-life bachelor Arie Luyendyk Jr. proposed to and then broke off his engagement with.

“But you indicted 13 Russians, like everything that happened in the Seychelles, that means nothing?” Strong as Kurin asks, clearly distraught.

“No, no I mean the Seychelles were amazing,” McKinnon as Mueller says, trying to comfort her. “It’s definitely something, it’s just the more time that goes by, you know, the more that I keep thinking about obstruction.”

“Collusion is the only thing I’ve been looking forward to for the past year,” sobs Strong.

The audience is then treated to a fake commercial for This Is U.S., a parody of This Is Us, with Brown as Carson saying that he’s nervous to head up the Department of Housing and Urban Development.

“No, I run the the Department of Housing and Urban Development,” says Brown.

“That’s hilarious!” his wife responds as she bursts out laughing.

You can watch both clips below: 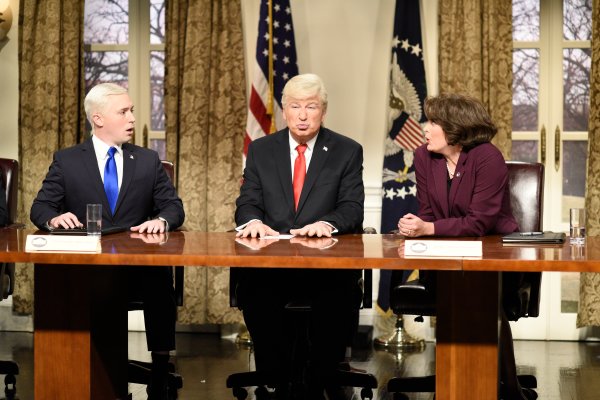 Alec Baldwin Returns as Trump on SNL
Next Up: Editor's Pick