You Should Root for UConn Over Kentucky Tonight

Ryan Boatright of the Connecticut Huskies reacts after a turnover by the Michigan State Spartans in the second half of the East Regional Final of the 2014 NCAA Men's Basketball Tournament at Madison Square Garden on March 30, 2014 in New York City.
Elsa—Getty Images
By Sean Gregory

Oh, you’ve got love this Cinderella* final. Since the NCAA tournament expanded to at least 64 teams in 1985, never before have two lower-seeded teams met in the national championship game. Monday night’s title game is a dream matchup between two underdogs* who have charmed the nation.

* Never have the terms “Cinderella” and “underdog” been more of a misnomer. They’d normally apply to much lower-seeded teams. But when the seventh seed is UConn, a team that won a national title just three seasons ago, has won three national titles since 1999 and is a perennial power, and the eighth seed is Kentucky, the winningest college hoops program in history that starts five freshman who may all be playing in the NBA next season, let’s cease any and all pluckiness talk.

In tonight’s title game, homing in on the guards is key. They’re important for both the on-court result and what they say about the tensions surrounding college sports. Kentucky starts a pair of freshman twins from Texas, Aaron and Andrew Harrison. In back-to-back games, Aaron Harrison has hit two of the gutsiest three-pointers you’ll ever see, first stabbing the heart of Michigan in the Midwest regional final, then winning the national semifinal game against Wisconsin with another huge three-pointer in the waning seconds. To borrow a phrase from our pal Bill Raftery, the kid’s got some serious onions.

But UConn’s own backcourt, senior Shabazz Napier and junior Ryan Boatright, have stepped up their defensive game during this tournament run: can these elder statesmen thwart the rookie twins from Kentucky? On Saturday night, Napier and Boatright shut down Florida’s two highly regarded guards, Scottie Wilbekin and Michael Frazier II. Wilbeken, the SEC Player of the Year and master of penetrating into the lane, scored just four points on 2-9 shooting, and recorded a single assist. Frazier, a three-point specialist in the mold of a Ray Allen, sank his first three of the game. It was his only one. He only got off two more shots from downtown, and finished with a measly three points.

The backcourt battle is also a college hoops culture clash — the kids who stayed in school (Napier-Boatright) vs. the ones likely off to the pros (Harrisons). Some experts are saying that Kentucky’s tournament run has really helped the brothers’ draft stock. Both Napier and Boatright considered heading to the pros after last season, but decided against it: the title game is a pretty sweet reward.

Boatright’s journey to the championship, in particular, represents college sports in all its craziness. I wrote a magazine feature on Boatright in 2007, when he was just starting ninth grade, because he was at the forefront of a disturbing trend: college coaches recruiting and offering scholarships to kids at younger and younger ages. Boatright was a curious case: USC coach Tim Floyd offered him a scholarship in eighth grade, even though Boatright was only 5-ft., 9-in., and 138 lbs. Boatright and his family gladly accepted the offer. It’s one thing to try to lock-up a man-child. But Boatright was a ninth-grader who actually, you know, looked like a ninth-grader.

Boatright picked his college before he even picked his high school. Recruiting experts scratched their heads. “What am I supposed to do?” Floyd, now the coach at the University of Texas-El Paso, told me at the time. “Should I wait until another school offers and then come in? I can’t do that. Because they’re going to say ‘Well, you’re late.'”

After meeting Boatright back in September of 2007, if you would have asked me to make a bet, right then and there, on his future, I would have wagered against him living up to the hype. He needed muscle, and some serious rotation on his jump shot. As I wrote, “Boatright [is] a bright, personable kid with a supportive extended family worth rooting for.” But gosh, he was so small — not surprising, considering he was 14. And all that pressure – failure almost seemed predetermined.

But Boatright came across unfazed. “I like the pressure,” said Boatright during our conversation, noshing on a chocolate long john at Dunkin’ Donuts before a Saturday-morning shoot-around. “I feed off it. I hear all the negative stuff, I just add another workout. I’ll make them feel stupid in the end.”

I’ve never been happier about being stupid. “He knew that, as a little guy, he had to work even harder,” says his grandfather, Tom Boatright, during a phone interview from Dallas, where he’ll attend his grandson’s championship game. Tom Boatright, who runs a track club in Aurora, helped train his grandson from an early age. Floyd resigned as coach of USC in 2009, after Boatright’s sophomore year of high school, amidst allegations that he gave $1,000 in cash to a middleman who helped steer current NBA player O.J. Mayo to the Trojans.

“After Floyd left, we just didn’t know if the new coach was even interested,” says Boatright. Ryan decommited from USC, but since he met, and maybe even exceeded expectations in high school, offers from plenty of big-time programs came pouring in. Boatright committed to West Virginia early in his senior season, but backed out after coach Bob Huggins signed another point guard. Eventually he decided on UConn, who went on to win the national championship.

In the end, Boatright, who now checks in at 6-feet, 168 pounds, was too good for USC. But his UConn career got off to a rocky start. The NCAA suspended him for six-regular season games for an infraction involving accepting a plane ticket while playing AAU ball. Then he had to sit three more games after the NCAA said he and his mother received additional improper benefits. When he was on the court during the 2011-2012 season, he and Napier, a year older, clashed.

“My freshman year, it was tough,” Ryan Boatright said on Sunday afternoon, CBS Sports reports. “I was used to having the ball all the time and making plays, and scoring the ball. Naturally as a kid, I was immature. You come in and you think it’s all about you. I grew up and, Shabazz will tell you, he wasn’t the best leader at that time. He had some stuff he had to work on. We bumped heads a lot. Both of us being from inner cities, and being tough guys, we ain’t back down to each other. We had some rough practices.”

Then UConn was put on academic probation and barred from playing in the 2013 tournament. Hall of Fame coach Jim Calhoun retired. Boatright, however, never seriously considered transferring. In January, Boatright’s cousin, Arin Williams, was shot to death in Aurora. They were like brothers.

“It’s just been such a long, tough journey,” says his mother, Tanesha, unable to hold back her tears during a phone interview from Dallas. “During the lowest moments, he was the one giving me encouragement.” When Boatright committed to USC in eighth grade, Tanesha was taken back by the criticism: that she was hungry for money, rushing her son into a major life decision. “After hearing the commentators and critics, it’s a relief to know I wasn’t a crazy mom,” says Tanesha, a single mother of four.

Boatright texted Tanesha just this morning, telling her to relax and smile. “Shouldn’t I be the one doing that?” Tanesha says. On offense, Boatright learned to accept his supporting role to Napier, the team’s top scorer. “Batman can’t function without Robin,” says Tanesha. “Even though Ryan’s not Batman, there are a thousand people in this world wishing they were Robin.” Boatright, who Tanesha says is on track to graduate, could still wind up leaving a year early for NBA riches. However, he’d probably benefit from a senior year of seasoning, out of Napier’s shadow.

But no matter what, Boatright conquered the early pressure, stayed in school longer than many pro prospects, and fought through setbacks and tragedy. If UConn’s upperclassman beat the hotshot frosh tonight, forgive this stupid spectator for giving a little cheer. 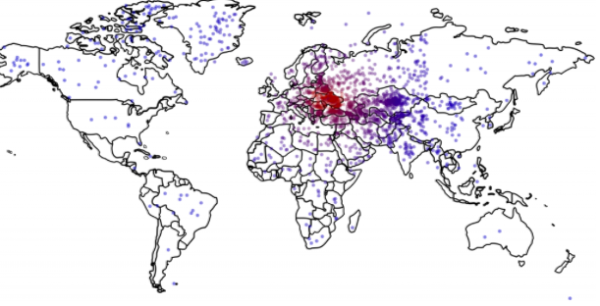 Only 1 in 6 Americans Can Find Ukraine on a Map
Next Up: Editor's Pick