The Women's History Hidden in America's Nuclear Past

Calutron operators at their panels, in the Y-12 plant at Oak Ridge during World War II. 1944. The calutrons were used to refine uranium ore into fissile material. During the Manhattan Project effort to construct an atomic explosive, workers toiled in secrecy, with no idea to what end their labors were directed. Gladys Owens, the woman seated in the foreground, did not realize what she had been doing until seeing this photo in a public tour of the facility fifty years later. Tennessee, USA.  (Photo by Galerie Bilderwelt/Getty Images)
Galerie Bilderwelt/Getty Images
By Janet Beard

Growing up near Oak Ridge, Tenn., I thought I knew what went on there. Not many people did in the beginning. In 1942, the U.S. government began building a secret city in East Tennessee as part of the Manhattan Project. By 1945, though Oak Ridge still wasn’t on any maps, 75,000 people were living and working there, most unaware that the town’s sprawling plants were designed to enrich uranium to be used in an atomic bomb. The secrecy of that ominous goal intrigued me as a kid. But what I didn’t fully appreciate back then was that most of the people working in those plants were women.

All history is women’s history, but we aren’t always taught about it that way. The history we learn in school is usually the history of great men, with a few great women sprinkled in along the way. But behind the epic tales of kings and generals are the stories of the everyday people who just as surely leave a mark on the world. That’s often where we have to look for women’s history. As a kid, I learned about the boys fighting “over there” in Europe and the Pacific. I learned that Einstein co-signed a letter to President Roosevelt warning him that the Nazis might be developing an atomic weapon. I learned that Robert Oppenheimer led the team of scientists designing the weapon. I learned that President Truman made the ultimate decision to drop two atomic bombs on Japan.

But, even though their story was a local one, I didn’t learn about the “Calutron Girls,” until I was an adult. These young women were mostly recent high school graduates from local areas hired to work in Oak Ridge’s Y-12 plant, operating Calutrons, the devices developed at the University of California, Berkeley to use an electromagnetic process to separate uranium isotopes. The women sat in front of large panels covered in meters and dials, which they were tasked with adjusting as needed. They had no idea what the dials and meters controlled and were under strict instructions not to try to find out. Adjust the meters and ask no questions — that was the relatively simple job. Still, some Y-12 physicists balked at the idea of hiring uneducated females for this work, which had previously been performed by graduate students at Berkeley. In fact, the women proved to be more efficient workers than the men they had replaced and produced enriched uranium faster.

Many of these women had never left their rural homes before and enjoyed living together in dormitories in this makeshift city, full of other young people. The Army provided them with recreation centers, roller rinks and cinemas, and quite a few people met their future spouses while working in Oak Ridge on the Manhattan Project. The Calutron operators only found out the purpose of their jobs when the first atomic bomb was dropped on Hiroshima, made from material they had helped to create. Soon after, most of them left Y-12, as operations dramatically scaled down with the end of the war and more effective methods of uranium enrichment were developed.

The Calutron Girls’ story gripped me, and I began researching a novel about them because I wanted to bring the history of those young women to life. I wish I had known their story when I was younger. Growing up, I sought out stories about women, not just in literature, but also in history. Those stories weren’t always easy to find. The history of wars particularly bored me, because it was always about men. I found it alienating, because I couldn’t picture myself as part of it. As I got older, I learned to project my imagination outside my own gender, as girls must do sooner or later to engage with the world. But even as my appreciation for male narratives grew, I began asking questions about what was often missing from those stories. After all, in times of war, half the population is still female. I wanted to learn about D-Day. But I also wanted to learn about the home front.

Happily, the stories of the people in the background of the great men are being told in more ways than when I was growing up. The Rosie the Riveter/World War II Home Front National Historical Park was established in 2000 in Richmond, Calif., to preserve the legacy of the U.S. civilians who contributed to the war effort from home, and, as its name suggests, the park pays special attention to the women who played a critical role in the wartime labor force. And the World War II Memorial, which opened on the mall in Washington D.C. in 2004, is not only the usual monument to fallen soldiers, but also an explicit commemoration of the sacrifices made by civilians at home.

Their stories are vital to fully understanding World War II, as well as being fascinating. If Americans want to truly understand our history, we must take the time to learn about the people, so often female, in the background of the official narratives. And we owe it those women to tell our daughters—and sons—about them, not just during Women’s History Month but anytime we teach them about the past. I want my daughter to grow up in a world where we tell women’s stories just as often and passionately as we have always told men’s.

All history is women’s history. Sometimes we just have to look a little deeper to find it. Behind the Oppenheimers and Roosevelts are hundreds of young women sitting in front of panels, staring at meters, adjusting dials — living their lives and changing the world.

Janet Beard is a native of East Tennessee and author of the novel The Atomic City Girls, currently on sale from William Morrow. 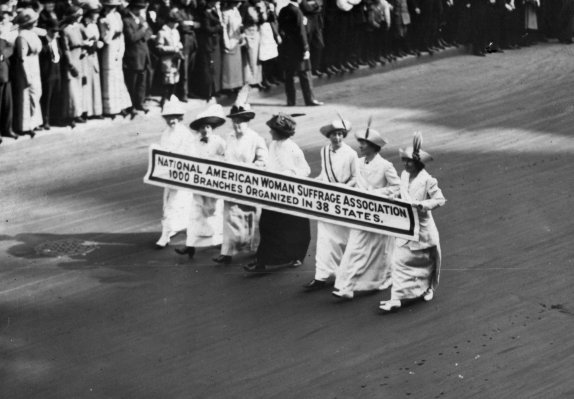