Samsung’s latest pair of iPhone rivals, the Galaxy S9 and Galaxy S9+, hit stores on March 16. And this year it’s all about the camera: Samsung’s new phones have a mechanical dual aperture that can adjust depending on the lighting and a new Super Slo-mo feature that automatically creates GIFs from your footage.

But it’s not just about what’s new. If you’re switching from an Apple iPhone, there are plenty of more subtle features that have existed on Samsung phones and other Android devices for years that may be worth paying attention to.

After spending more than a week using the Galaxy S9+ instead of the iPhone X, here are five features that stood out to me that Apple’s smartphone is missing.

The screen on Samsung’s smartphones can show information like the time, date, battery level, and notification icons even when the display is turned off — essentially allowing them to double as a bedside clock. I loved being able to just glance over at my phone without picking it up to check whether or not I had any new text messages or to see if I should plug in my phone before leaving the office.

The Galaxy S9 feature was particularly helpful coming from the iPhone X, which I usually have to pick up to unlock since it doesn’t have a fingerprint sensor. Previous Samsung phone models, such as the Galaxy S8 and Galaxy S7, as well as other Android phones like the Google Pixel 2, also have this always-on display feature.

There are three Galaxy S9 features in particular that gave me more flexibility in terms of how I use my phone: the fingerprint sensor, the microSD card slot, and the headphone jack. I wasn’t forced to type in a passcode if I didn’t want to use facial recognition, and I could use any pair of wired headphones without remembering to bring an adapter with me all the time. Plus, knowing I had the option to add extra storage by purchasing a microSD card, many of which cost less than $100 depending on the size, eased any anxiety I might have about running out of space.

Although the iPhone X’s Face ID works most of the time, I still find myself occasionally typing in my passcode on Apple’s smartphone. It’s in these circumstances that I wish the iPhone X also had a fingerprint scanner on its back like the Galaxy S9 and other Android phones (I now find myself instinctively reaching for it on the iPhone X). The Galaxy S9’s fingerprint sensor is located at a more natural location compared to previous versions — underneath the camera rather than alongside it — which made it easy to get to my home screen almost immediately since my finger naturally aligns with the sensor. I often found this to be smoother than making sure the S9’s camera lined up with my eyes properly for facial recognition.

Because the Galaxy S9 has a 3.5mm headphone jack, I didn’t have to worry about keeping track of a small accessory to continue using the headphones I already own when listening to music. Newer iPhones and many recent Android phones don’t have a headphone jack, meaning you’ll have to use the included dongle to attach your current wired headphones to the device. Otherwise, your choices include using the earbuds that come bundled with your device or switching to wireless Bluetooth headphones.

As with many other Android phones, you can also choose to add more storage to the Galaxy S9 by purchasing a microSD card, which may be useful for those who download a lot of full-length movies or frequently shoot 4K video on their phones. It’s possible to find microSD cards on Amazon that add 128GB to your phone for about $40-$45, whereas with an iPhone you’re stuck with the same amount of storage you paid for on day one.

The iPhone X’s top-notch camera is tough to beat, and in most cases I found that it captures sharper details and more accurate colors than Samsung’s phone. But when it comes to shooting in the dark, Samsung wins. Nearly every time I captured photos in dim environments, the Galaxy S9+ was able to grab a cleaner and clearer shot than the iPhone X. That’s thanks in part to the S9’s improved camera, which can now adjust its aperture to f/1.5 or f/2.4 depending on the lighting.

Check out the photos below to see how the S9+ compares to the iPhone X and its Galaxy S8 predecessor.

A photo taken with the Galaxy S9+ in low light conditions.
Lisa Eadicicco

A photo taken with the iPhone X in low light conditions.
Lisa Eadicicco

A photo taken with the Galaxy S8 in low light conditions.
Lisa Eadicicco

Read more: 3 Things I Learned After One Month With Apple’s HomePod

New smartphones from Samsung, Apple, Google, and LG all have nearly borderless displays that occupy almost the entire face of the device. But Samsung’s new phones, as well as the Galaxy S8 and Galaxy Note 8, are different in that their displays ever so slightly curve over the phones’ left and right edges. This gives the devices a more elegant look and makes the illusion that there’s no frame around the screen feel more convincing.

Plus, the Galaxy S9 doesn’t have a “notch” at the top of the screen for its camera and facial recognition sensors, a design choice for which some tech pundits and fans criticized Apple.

As I imagine is the case for many people, I use my phone for just about everything when I’m not at work: Getting directions, taking notes, sending emails, browsing Facebook and so on. That means I spend a lot of time switching between apps, especially if I’m trying to copy and paste material from my notes or a web browser into an email.

While I love the simplicity of iOS, Android phones are generally much better at helping you juggle several tasks at once. Samsung’s smartphones have long offered the ability to open more than one app on screen at a time, and that’s no different with the Galaxy S9. Just tap the recent apps button and press the multi-window symbol in the app’s title bar to launch it in split screen mode. Apple has made an effort to bring better multitasking to the iPad through features like Slide Over and Split View in recent years, but we have yet to see these capabilities come to the iPhone. 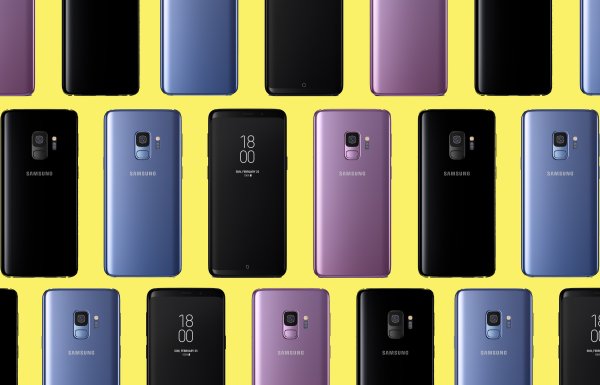