One outcome of the 2018 Winter Olympics was the founding of a mutual appreciation society between Olympic figure skater Adam Rippon and actress Reese Witherspoon. The two stars spent the Olympics tweeting their love of each other:

However, they never met until Stephen Colbert invited them both onto The Late Show. Unsurprisingly, it was love at first site. The two shared a hug and Witherspoon told the 28-year-old athlete that he was “more handsome in person than even on the ice.” They even held hands during the interview. “This is meant to be,” the Wrinkle in Time star said upon meeting Rippon. “This is the relationship the world has been waiting for.”

Rippon admitted that he had been a fan of Witherspoon’s for a long time. “I think when I watched Legally Blonde that was it. That’s when I fell in love,” he said. “And you’re so beautiful in person.”

“Thank you,” Witherspoon replied. “I was talking to Stephen,” Rippon quipped.

Rippon was in the mood for a pick-me-up, because as he told Colbert, “When I got out here, my life was in shambles.” What had caused the bronze medalist’s life to derail? He lost a button on his shirt before coming out on stage, leaving him with a gaping hole in his shirt. “I’m embarrassed, but I’m not,” he said. “Do you know what I mean?” 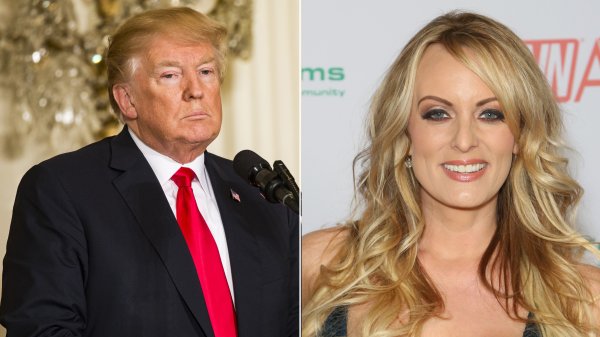 Jimmy Kimmel Is Pretty Sure He Can Solve the Whole Stormy Daniels Conflict If He Just Steps In
Next Up: Editor's Pick