The Fearless Girl Statue Won't Be Staring Down the Charging Bull Anymore. But She'll Be Close By

The "Fearless Girl" statue, a four-foot statue of a young girl, defiantly looks up the iconic Wall Street "Charging Bull" sculpture in New York City, United States on March 29, 2017. "Fearless Girl" statue was installed in front of the bronze "Charging Bull" for International Women's Day earlier this month to draw attention to the gender pay gap and lack of gender diversity on corporate boards in the financial sector. The statue will remain at her post until February 2018.
Photo by Volkan Furuncu—Anadolu Agency/Getty Images
By Lisa Marie Segarra

After a year of staring down Wall Street’s “Charging Bull” in New York City, the “Fearless Girl” is moving.

The defiant statute is moving just a few blocks away — and will now be permanently placed across the street from the New York Stock Exchange, according to the New York Daily News.

State Street Global Advisors first put up “Fearless Girl” on March 7, 2017, on the eve of last year’s International Women’s Day as a temporary installation meant to last one week. Artist Kristen Visbal, who is based in Delaware and primarily works in bronze, created the sculpture.

But, she became an almost instant celebrity – touted by many as a symbol of defiance and strength for women. “Fearless Girl” has starred in countless selfies and photos, with tourists and New Yorkers alike.

After 40,000 people signed a Change.org petition asking for her to become a permanent fixture of Wall Street, New York City Mayor Bill de Blasio announced that “Fearless Girl” could stay through February 2018. After that, she would have to find a new home.

Not everyone has been happy with the placement and fame of “Fearless Girl.” The artist behind “Charging Bull,” which had stood unimpeded on Wall Street since 1989, threatened to sue.

Arturo Di Modica told the New York Post, “That is not a symbol! That’s an advertising trick.”

His lawyer, Norman Siegel, told the New York Times that “Fearless Girl” fundamentally changed the meaning of “Charging Bull.” He said the older statue “has been transformed into a negative force and a threat.”

To protest, one artist places his own “Pissing Pug” sculpture of a urinating dog by the “Fearless Girl” statue’s feet.

“The dog invading her space is reflective of her invading the space that belongs to the bull,” the “Pissing Pug” artist Alex Gardega told the Washington Post. 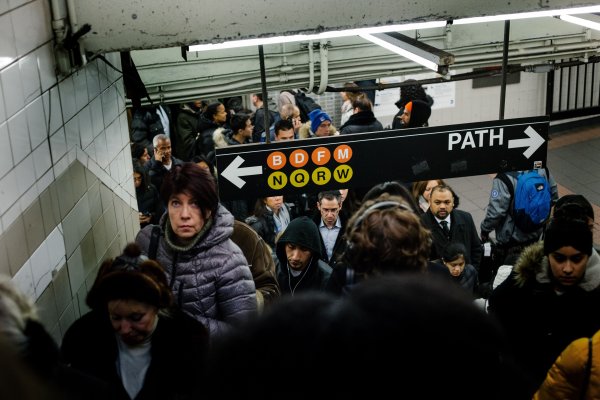