Sergei Skripal, the former Russian spy now fighting for his life in a British hospital, had every reason to feel secure in his retirement in the south of England.

Unlike some of his comrades, who had escaped to the West with the help from foreign spymasters, Skripal was sent abroad on orders of the Kremlin. He had served four years in a Russian prison for his work as a double agent. And then he was released, in full compliance with Russian law, through a deal that gave the Kremlin no reasons to complain.

Yet on March 4, British police found Skripal unconscious in a park in the city of Salisbury, apparently poisoned with a rare and deadly nerve agent. The attack also critically injured his daughter and a British policeman, apparently as collateral damage, and there are still no clear motives or suspects in the case. But if Russia’s spy agencies were involved, the poisoning would go against some basic rules of espionage, especially considering the way Skripal wound up in the U.K. in the first place.

At the end of June 2010, when he was serving out his sentence for high treason in Russia, the FBI arrested ten Russian agents working in the U.S. under cover. In exchange for their freedom, the Kremlin agreed to release Skripal and two other men convicted in Russia for espionage. As a former colonel accused of outing dozens of Russian agents, Skripal was among the more valuable pieces in this trade, though at the time he received scant attention in the media. The cameras were focused instead on a relatively minor player: Anna Chapman, the Russian operative who was all-too-generously painted in the press as a latter-day Mata Hari. For the U.S. and Russian governments, Chapman made for a nice distraction from the more embarrassing aspects of the case.

For one thing, the swap was an awful deal for the U.S. government, which was then in the second year of the Obama Administration. Even apart from its basic arithmetic – three prisoners in exchange for 10 – these two groups were by no means equal in value.

Aside from Chapman – whose tradecraft was closer to Austin Powers than 007 – the spies arrested in the U.S. made up a big chunk of Russia’s Illegals Program. Among them were the types of sleeper agents who pose as normal members of American society, complete with fake identities, perfect English, regular jobs and, in some cases, children who have no idea their parents are spies. Such spooks are the most difficult to train and deploy, and losing so many of them all at once was among the biggest failures in the history of Russian espionage.

Now consider what Russia gave up to get them back. Of the three convicted spies released from Russian prisons, Skripal was the only one to provide the West – specifically, the British intelligence services – with a rare window into the agency known as the GRU, which has a reputation as the most disciplined and secretive in Russia’s intelligence community. But even with Skripal thrown into the mix, the U.S. did not get much for releasing all of those sleeper agents. The main reason the White House went along with it was, apparently, politics.

A few days before the Russian spies were arrested, Dmitri Medvedev, who was then serving as Russia’s president, had paid a visit to the U.S. to see his new friend and counterpart Barack Obama. They seemed to have a lot of fun together. They were both keen to “reset” U.S.-Russian relations. And while passing through Arlington, Virginia, the two of them even stopped for lunch at Ray’s Hell Burger, where they shared a portion of French fries.

The next week, Medvedev was probably still recovering from jetlag in Moscow when Obama called to talk about the awkward matter of the spies. Neither of them wanted to make a big thing of it. Why spoil the good will that had resulted from their reset? Both Presidents quickly and quietly agreed to arrange the swap.

Oleg Nechiporenko, a retired KGB colonel, who at the height of the Cold War was outed as a spy in Mexico and deported to Moscow, told me that the deal had an obvious “lack of parity.” It was a mystery to him at the time why the Americans accepted it, but he guessed that it may have been “a kind of apology” from Obama for publicizing the arrest of the Russian illegals. “Or maybe just to speed things up,” Nechiporenko told me in 2010.

In their haste, the Americans even agreed to pad their wish list with Igor Sutyagin, a Russian academic who had been convicted of espionage on the thinnest of charges. Flying out of Moscow as part of the swap, Sutyagin recalls a U.S. diplomat sidling up to him and asking that he not seek asylum in the U.S. “They freed me for humanitarian reasons,” he told me a few years later in London, where he wound up finding a job and a home. “But they felt no responsibility for me, because I was not an actual spy.”

The same cannot be said of Skripal. In the eyes of Russian prosecutors, his work as a double agent amounted to high treason, and he was given a 13-year sentence in prison in 2006. The spy swap set him free four years later, and for the rest of his life, the informal rules that govern such trades gave him a chance to live in peace.

His release had, after all, been sanctioned by the Russian government, which could easily have decided to keep him locked up by taking his name off the swap list. The Americans would probably have accepted some replacement. Instead, shortly after the swap was done, President Medvedev granted Skripal an official pardon. This meant the Russian state had no more grudge against him. He was free to go, which is partly what makes his poisoning seem so bizarre.

In the eyes of whoever organized the attack, the pardon Skripal got from the Kremlin was meaningless, as was the state’s decision to let him go. Investigators have already suggested that the most obvious suspects in the case are the Russian intelligence services. But if they are responsible, it would suggest a major break from the rules they are taught to follow.

As Mark Galeotti, an expert in Russia’s spy agencies, wrote this week of the Skripal case, “It seems to reflect a breakdown in the old etiquette of espionage.” It suggests that a much wider range of Western intelligence assets, both current ones and those already retired, could become the targets of Russian retribution going forward. And it means that the West should start considering, in Galeotti’s words, “new ways to punish Moscow, ones the Russians have not already gamed out in advance.”

It’s still possible, of course, that Skripal did something to provoke retaliation from Moscow. The GRU has recently been implicated in the hacking of the U.S. elections in 2016. And if the former colonel was tapping his old sources to get fresh intelligence, rather than enjoying his retirement in silence, he could have turned himself into an target.

But there’s no evidence to suggest that — and without it, Skripal’s old comrades might have been expected to leave him alone. Even if some in Moscow continued to see him as a traitor, the official pardon he received from the state should have shielded Skripal from their desire for revenge. It should not matter that the pardon was granted when Medvedev was in charge, or that the swap was organized under Obama. Then again, with Putin in power, maybe such deals no longer apply. 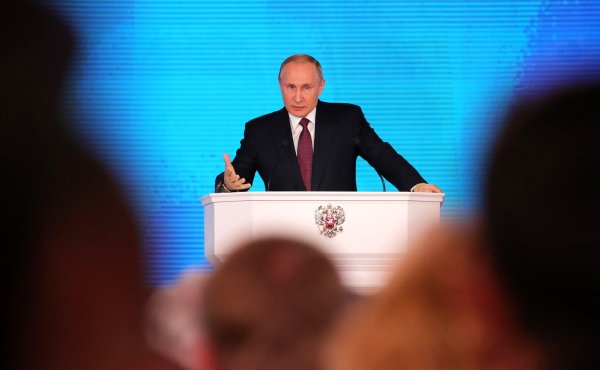 Experts Doubt Russia's Arsenal of Nuclear Weapons Would Work
Next Up: Editor's Pick