The 5 Star Movement is the first party in both the Chamber of Deputies and the Senate of the Republic, obtaining 32% of the votes and winning in almost all the constituencies of southern Italy. Luigi Di Maio could get the task of the President of the Republic Sergio Mattarella for the formation of the new government on March 6, 2018 in Pomigliano D'Arco, Italy
Ivan Romano—Getty Images
By Ian Bremmer

It’s hard to be surprised when Italians vote for change. After all, this is a country that has had more than 60 governments in just over 70 years. But the results of the general election on March 4 were striking nonetheless. The right-wing and anti-establishment parties angry about immigration carried the day, and now President Sergio Mattarella must decide who will have first shot at leading the ugly process of trying to form a new government. In the meantime, the message for Europe is loud and clear: Populism isn’t dead. It isn’t even wounded.

After the Trump and Brexit votes in 2016, the perception was that Europe had taken a step back from its lurch toward the populist right. In 2017, notorious xenophobe Geert Wilders came up short in the Netherlands. Emmanuel Macron, a pro-European centrist, carried the day in France. Angela Merkel won a fourth term as Germany’s Chancellor.

Look closer. In Europe today, Europeanists heave a sigh of relief when politicians like Wilders only come in second. In France, the traditional parties of center-right and center-left finished third and fifth in the first round of voting. In Germany, the vote share of the center-right and center-left parties that will form the next “grand coalition” fell from 67% in 2013 to just 53% last October. Merkel still leads, but Alternative for Germany, the first far-right party to win seats in the Bundestag since Adolf Hitler, is the primary opposition party.

In Italy too, the familiar faces of the center-right and center-left, in this case former Prime Ministers Silvio Berlusconi and Matteo Renzi, were pushed aside. Instead, the Five Star Movement, an anti-establishment party helmed by an angry comedian and secessionist party the League, with partners and supporters that have embraced fascist symbolism, led the way.

Just how damaging will this be to the idea of a united Europe? Italy’s next government, no matter who leads it, will not push for an exit from the E.U. or even from the single currency. Nor will it deport all those migrants, given the cost and logistics involved. But it might well launch a spending spree that will enrage the E.U.’s leadership. Both Five Star and the League openly flaunted their disdain for E.U. fiscal rules on the campaign trail, and any government comprising either will be pressured to deliver on their campaign spending promises. Doing so will hit Italy’s past deficit reduction efforts, and maybe even reverse them entirely. Italy struggles to comply with E.U.-mandated debt and structural adjustment targets as it is. A more confrontational Italy will also spook capital markets at a precarious time for the Italian economy, the euro zone’s third largest.

It will also undermine the bid for European reform led by Macron and Merkel. The French President wants to establish common E.U.-wide policies on defense, taxes and asylum rules for migrants. He has also called for a euro-zone parliament, euro-zone ministers, a euro-zone budget, better coordination on tax policy and a common approach to border controls.

But Italy’s government is likely to prove friendlier to the governments in Poland and Hungary, which are now openly defying E.U. rules. At a moment when negotiations over Britain’s exit are beginning to gather steam, as separatist pressures continue in Spain, as Eastern European governments challenge Brussels and as outsiders like Russia and Turkey test European unity, Italy’s latest political convulsion is not a hopeful sign. 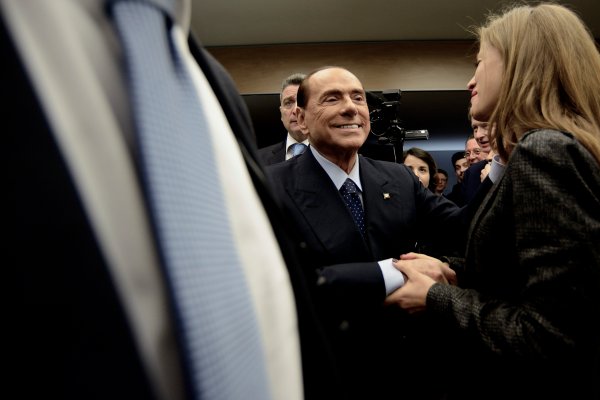 Italy's Silvio Berlusconi Is Back in the Spotlight and So Are His Sexist Comments. Here Are Some of His Worst.
Next Up: Editor's Pick