The honorary titles once decorating Myanmar’s de facto leader Aung San Suu Kyi continue to be revoked amid the ongoing Rohingya crisis, with the U.S. Holocaust Memorial Museum becoming the latest to withdraw an award from the erstwhile democracy icon.

The museum announced Wednesday that is rescinding Suu Kyi’s Elie Wiesel Award, bestowed on her in 2012, due to her refusal to stop or condemn military violence against the Muslim Rohingya minority.

“It is with great regret that we are now rescinding that award. We did not take this decision lightly,” the museum said in a letter addressed to Suu Kyi, who is Myanmar’s State Counsellor. The museum, which emphasizes genocide prevention, said it “has been closely monitoring the military’s campaign against the Rohingya,” as well as Suu Kyi’s handling of her government’s response.

“We understand the difficult situation you must face in confronting decades of military misrule and violence in your country and that institution’s still powerful constitutional role,” the statement continued. “However, the military’s orchestration of the crimes against Rohingya and the severity of the atrocities in recent months demand that you use your moral authority to address this situation.”

Since 2015, the museum has warned that Myanmar’s decades-long persecution of the Rohingya, including denial of citizenship, education and access to health care, could be early warning signs of genocide.

Over the past two years, the Myanmar military has responded violently to what it says was were attacks by a Rohingya insurgent group. The museum said it hoped Suu Kyi “would condemn those actions and express solidarity with the Rohingya.”

Instead, Suu Kyi’s government has been accused of running an internationally criticized propaganda campaign. State media has published op-eds referring to the group as “fleas” and other dehumanizing monikers. The leader herself said in September that a “huge iceberg of misinformation” was exacerbating the crisis, and has repeatedly sided publicly with the military.

Since security forces renewed what they call “clearance operations” last August, more than 671,000 Rohingya, most of them children, have fled Myanmar for neighboring Bangladesh with little more than accounts of the atrocities they witnessed.

The U.N. has labeled the violence “ethnic cleansing” and has documented evidence of well coordinated and systemic violence, including rape, arson and extrajudicial killings. The U.N. Office of the High Commissioner for Human Rights concluded that the brutal attacks and eradication of whole villages was intended to prevent the return of Rohingya to Myanmar.

Myanmar denies committing atrocities and claims to be waging a legitimate counterterrorism campaign. Within Myanmar, Rohingya are widely referred to as “Bengalis” and portrayed as dangerous interlopers from Bangladesh.

Suu Kyi, a Nobel Peace Prize laureate who holds the titles of State Counsellor and Foreign Minister since her government came to power in early 2016, has recently lost several other awards earned in honor of her years as a dissident under the former military junta. The freedoms of the cities of Dublin, London and Oxford have all been revoked.

Fellow Nobel laureates have also criticized her handling of the Rohingya crisis, which the U.N. reiterated this week has not stopped. 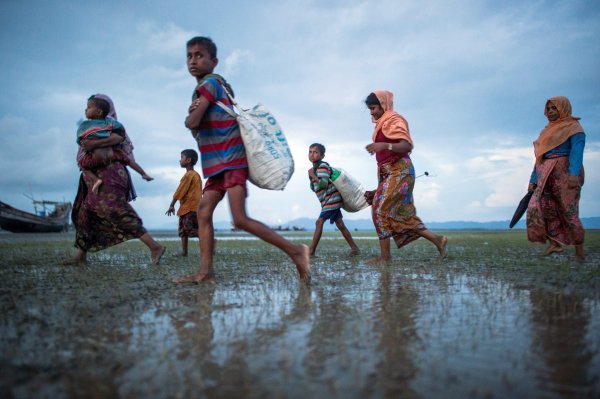