Here's the Absolute Worst Place to Get Stung by a Bee

Michael Smith, a Cornell University graduate student, studies the evolution and behavior of honeybees. But when he wanted to know the answer to a question that is likely to be at the forefront of many bee researchers’ minds — “Where is the most painful place to be stung?” — he realized that academia was light on research into the subject of bee stings and pain. So, he did what any student of science would do: He stung himself 190 times in various body parts to find out.

Everyday for 38 days, Smith would use forceps to pick up a honeybee by its wings and then hold the undoubtedly bewildered bee on the place he was testing for pain and kept the stinger in place for one full minute. Smith rated the pain on a scale of 1 to 10 and calibrated his experiment by starting and ending each stinging session with a sting on his forearm. Over the course of the experiment, Smith stung himself in 25 different body parts, three times each. Body parts on the list? The entire body from toes to the top of the skull and everything in between, including penis, testicles and rear end.

The results of his study, which were published in the scientific journal PeerJ, revealed that out of the 25 different body part the most painful place for a bee sting was, surprisingly, the nose. Smith ranked it a 9 out of 10 on pain levels. Lips followed close behind with a rating of 8.7 out of 10 — surprisingly more painful than the sting to his penis, which came in at 7.3 and testicles, which merited merely a 7, tying for fourth with the cheek, palm and armpit.

Smith admits that the results of his experiment are subjective as other people might feel pain more sharply in different places and could have different results in different locations. Sorry, masochists, but Smith isn’t looking for volunteers to continue the study. “I didn’t see a lot of merit in repeating this with more subjects,” he said in National Geographic.

MORE: ‘My Girl’ Movie Turned into a Game Where You Try to Avoid Being Stung by Bees 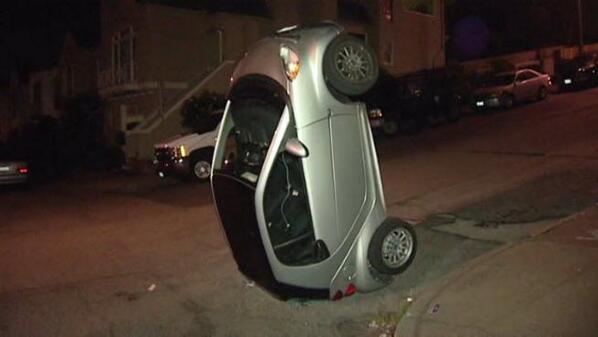 Vandals Are Running Amok Flipping Over Smart Cars In San Francisco
Next Up: Editor's Pick