As Betsy DeVos made her way around Marjory Stoneman Douglas High School in Parkland, Fla., where a gunman killed 17 students and teachers last month, a small group of student journalists grew increasingly frustrated at each question they say the controversial U.S. Secretary of Education seemed to dodge.

For about an hour on Wednesday morning, at least three student journalists from the school’s newspaper, TV production and yearbook staff followed DeVos around campus, where they say she pet comfort dogs, shook hands with the school’s faculty and offered “generic” answers to their specific questions about how concrete changes can be made.

“It was a publicity stunt, really. There was no point to it,” said Alyson Sheehy, an 18-year-old yearbook editor who was part of the small student press pool. “I kind of expected that to happen, but it’s still frustrating that she made the trip out here and made it a big deal but didn’t do anything.”

Sheehy said DeVos “didn’t meet specifically with anyone” during her high-profile visit on the students’ first full day back at school. “She was kind of just walking around the school and not talking to anybody,” the high school senior said. “We just kind of followed her around.”

When the student journalists asked DeVos questions about her goals and how she plans to stop school shootings, they said DeVos demurred. “She kind of gave us simple answers and didn’t really answer the questions we asked,” Sheehy said.

When the students pressed DeVos with questions about policy changes, Sheehy said she told them officials were “working really hard on things” and that she didn’t “think this is the time to really ask those types of questions.”

That did little to move or convince the students and even some adults, including English teacher Melissa Falkowski, who advises dozens of students on the school’s newspaper, The Eagle Eye.

“She didn’t come to answer questions,” Falkowski said. “I feel like a lot of people have used what happened for their own personal agenda and that sort of felt like that.”

“I’m not really sure what the purpose of her visit was because she didn’t meet formally with any teachers or students,” she added. “Her being here, I don’t think is going to result in any help or change.”

In a statement, U.S. Department of Education spokeswoman Liz Hill said DeVos’ visit was “designed to lend support to the community during a difficult time, but also to minimize disruption on students’ first full day back at school.” Last week, DeVos gave Broward County Public Schools a $1 million grant to use toward recovery efforts.

“The Secretary has said the students of MSD have shown tremendous strength and that their voice are extremely important as we work to find solutions to keep students safe,” Hill added. “She had some conversations with students today, but wants to sit down with more students from MSD in the near future.”

DeVos made the same remark during a brief news conference Wednesday after her visit, which she said was “very sobering and very inspiring.”

The Education Secretary also said she was willing to return to Stoneman Douglas for longer talks with the young journalists. “I told the student newspaper reporters that I would love to come back sometime, in an appropriate amount of time, and just sit down and talk to them,” she said. “We are committed not only to listening but to action.”

Many students balked at the idea or approached it with caution. “We would welcome it,” Sheehy said, “but if she pulls the same thing she did today, we’re not going to take it.”

During her confirmation hearing last January, when asked about gun-free zones around schools, DeVos infamously said she “would imagine that there’s probably a gun in the school [in Wyoming] to protect from potential grizzlies.”

Carly Novell, a 17-year-old student journalist on the newspaper staff, who was not part of the student press pool Wednesday, said she’d rather be visited by people openly committed to ending gun violence.

“I’d rather her not come at all,” Novell said. 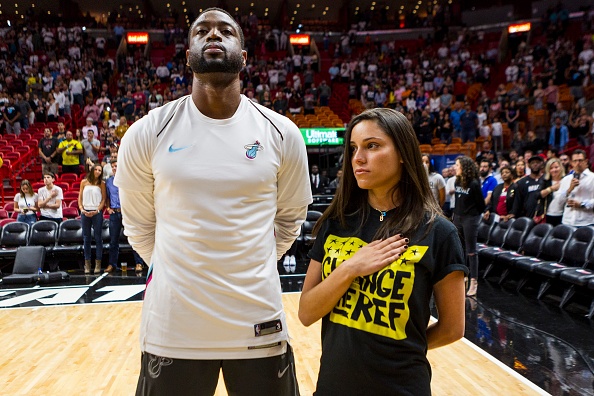