It’s about 3:30 p.m. on a Wednesday in February, and some 700,000 people are anxiously waiting for Scott Rogowsky to show up. As the minutes tick by, their anticipation lights up their smartphone screens at an increasingly frantic pace. But Rogowsky is hunched over a laptop in SoHo cramming for the upcoming HQ Trivia game he’s about to host. (By the time he gets to it, about a million players will have logged on.) He’s quiet and focused until he isn’t: “What did Dr. Robotnik do?” he asks incredulously, referring to the fictional villain from the Sonic the Hedgehog video-game series.

The typical preshow routine for Rogowsky, one of the hosts of the wildly popular HQ Trivia, isn’t usually so rushed. For the uninitiated, HQ Trivia is a live game show that people can play and watch via a mobile app. The free game doles out a cash prize for all contestants who correctly answer 12 questions in a row, but players are given only 10 seconds to answer. The money pot usually fluctuates somewhere around $2,000, though it has been as high as $50,000. The prize is split evenly among all the winners, leaving some champions with just a few dollars and luckier victors with thousands, depending on how many winners they’re sharing it with. HQ games usually air like clockwork at 3 p.m. and 9 p.m. E.T. on weekdays, but today the producers added a surprise double feature in the afternoon slot.

Read more: Here’s How You Can Win HQ Trivia

The formula is working: since its August 2017 launch, HQ has grown at a breakneck pace, reaching a record high of 2.18 million concurrent players on March 4, up from 2 million on Feb. 4. In the app’s success many see the perfection of interactive television or an antidote to the atomized media world created by streaming television and apps. Others see it as a preview of the dystopian nightmare those things ensure. Either way, a lot of people are dropping everything they’re doing at 3 p.m. daily to join in.

Despite the massive buzz and consider- able controversy the young startup has generated, much about HQ remains a secret. How will it turn a profit? TBD. How will it avoid the fate of flash-in-the-pan app fads? Not yet clear. What’s certain is that HQ has perfected a formula for getting people to regularly tune in. And that recipe begins with how the show’s staff writes and presents its trivia.

HQ Trivia is the brainchild of Rus Yusupov and Colin Kroll, who previously co-created the social video app Vine and sold it to Twitter in 2012 for a reported $30 million. HQ shares some of Vine’s chief characteristics: it takes a well-established medium—then it was funny video clips, now it’s trivia—miniaturizes it and makes it feel natural on a phone. (Not to mention, it became an overnight hit with users.) The result is a game that sometimes feels haphazard and chaotic. Its video streams could regularly freeze Rogowsky and the other four hosts in awkward frames. And sometimes players get glitched out of finishing a round. It’s all wildly addictive.

HQ Trivia’s habit-forming hook boils down to the questions, which can range from mind-numbingly easy (Which of these is NOT part of Disney’s Magic Kingdom? Answer: Cleveland) to the esoteric and obscure (The height difference between the current World’s Tallest & Shortest Living Men is roughly how much? Answer: 6 ft. 0 in.). These wild swings between reward and disappointment make playing HQ almost feel like gambling, minus the monetary risk, since the game is entirely free to play. Each time you beat your high score and make it to a new question, you’ve come closer to winning the next round. Theoretically, anyway.

Turns out, the questions are engineered that way. Yusupov and head writer Jesse Thompson have a growing team of writers and researchers following a surprisingly well-honed process. (Rogowsky and HQ’s head of content, Nick Gallo, wrote most of the questions themselves during the app’s early days.) Writers focus on specific categories when coming up with questions, which regularly change based on what’s happening in the world. If the category is “home life,” for example, a writer may be asked to come up with questions about taxes, getting married or pregnancy. These prompts are then stored away for future shows in no particular order, giving HQ’s showrunners a bank to choose from when assembling quizzes. Fact checkers now verify every question added to the stockpile before it ends up in a show’s lineup.

In order to reach that stage, questions must meet HQ’s rigid guidelines, which “have become the bible” for how the team writes, according to Yusupov. “I think there are 50 different filters that each writer needs to go through to get a perfect question,”says Thompson. Such criteria is why you likely won’t get questions that involve solving math equations or that hone in on heavy subjects like death or violence. Thompson mentioned disgraced Hollywood producer Harvey Weinstein as an example of a topic that’s been in the news but wouldn’t fit within HQ’s criteria of keeping things upbeat. “When you’re focused on this thing, your thoughts are racing,” says Thompson of the app. “And we want to keep the focus right there. We don’t want players to go to dark places.”

Other guidelines limit how long questions can be and how they’re phrased in order to avoid hiccups and mispronunciations on air. “If we’re writing stuff that trips up the hosts, it’s bad,” says Thompson. “You see it once in a while, when we get something that’s too ambitious and someone doesn’t quite nail it, and it throws off the flow.”

More challenging than coming up with questions can be inventing fake answers that are indisputably wrong yet clever enough to fool most of the audience. “In my first month of writing questions, I would dip into that gray area of, it’s not wrong but people are debating it,” Thompson says. One method for avoiding this, he says, is to approach the process by coming up with the solution before the problem. As an example, Thompson cited a recent question that asked players to pick the correct name for a square with rounded corners, which he recently discovered is called a squircle. “So I was like, ‘O.K., now I just have to come up with one ridiculous-sounding thing and then one that sounds kind of normal,” he says. “And pretty much everyone picked the normal-sounding one.”

Occasionally, writers will come up with a question that knocks out the majority of players, referred to by hosts and players as a “savage question.” Sometimes what turns out to have been a savage question shocks the game’s creators just as much as it does players. “It’s very revealing about what people do now, and what people won’t know,” says Yusupov. “Who would have thought that people didn’t know ivory comes from elks and not rhinos?” Even Rogowsky, who sometimes plays the game when he’s not hosting, says he has never won a single game of HQ.

The opening and closing monologues that happen at the beginning and end of each show are also scripted by both the writers and the hosts. Thompson tells me some writers specifically focus on the “frills,” which is HQ lingo for the banter and factoids between each question. Most of the time, the hosts stick to the script. “Scott will read, like, 50% of what the writers have written,” says Thompson. “And he’ll improv the rest. But he’s an improv comedian, and we can’t expect other people to do that.”

Frills are especially important when something goes wrong during a broadcast, which has been a fairly common occurrence in the show’s short history. When there’s a technical hitch, HQ hosts must vamp for the audience until the issue is fixed. “I should come in with something prepared, like a backup for when things go down,” Rogowsky says. “I’ve toyed with the idea of bringing in a copy of The Great Gatsby,” presumably to read out loud. Yet it’s in these unscripted moments that Rogowsky feels the most comfortable on air. He likens it to making small talk in an elevator that’s stuck between floors. “In a weird way, I sort of relish it, because it’s a chance for me to have pure fun with the audience,” he says. “These dark corners of my mind now get exposed on HQ because those synapses fire in a very strange way when you’re talking to a camera for 15 minutes.”

That length—15 minutes—is intentional too. The creators decided to make the game 12 questions long, because it amounts to about 15 minutes when you account for each 10-second question and the frills in between. All of which is just long enough to keep people hooked without boring them. “We want to own time slots,” Yusupov says. “What I’m seeing is that people are developing habits around HQ in the same way that they would develop habits around their favorite TV shows.”

Whether the habit will stick is an open question. Yusupov has a track record of founding fleeting apps that shine bright and fade quickly. Vine helped launch the careers of new age Internet celebrities like Nash Grier and Logan Paul, but Twitter shut it down in 2017 as rival social apps began offering similar features. And for an app that’s half a year old, HQ has found itself embroiled in its fair share of scandals, the most notable of which occurred in early February. When it was reported that HQ was raising money from Founders Fund, the venture-capital firm co-founded by Peter Thiel (who helped fund the lawsuit that eventually shut down popular news site Gawker), the phrase #DeleteHQ circulated on Twitter. In December, Recode reported that HQ Trivia’s founders were having trouble securing funding because some investors were concerned about Kroll’s behavior during his tenure at Twitter. Yusupov says he isn’t worried about fans abandoning the app and defends his decision to work with Founders Fund’s Cyan Banister, who is leading a $15 million investment in the company. “She believes in our vision, and we share the same philosophies around emerging technologies,” he says.

Back at HQ Trivia’s scrappy headquarters, that vision seems pretty clear. A styling station is positioned in the corner near a glowing HQ sign where host Sharon Carpenter is reviewing the script for the upcoming game she’ll be hosting for U.K. players as a stylist brushes makeup over her face. A giant black board that extends from the floor to nearly the ceiling is covered in multicolored sticky notes that signify which host is scheduled to present the quiz on a given day. HQ Trivia may dominate the 3 p.m. and 9 p.m. time slots for millions of smartphone owners, but Yusupov has grander ambitions. “I think we can expand to a new schedule and have people shift their behaviors around these shared moments,” he says. Minutes after HQ notified users about the surprise game I witnessed, hundreds of thousands have logged on — even though another game ended just a few minutes prior. “Everyone came back,”Yusupov announces, as if the unscheduled game was a test he wasn’t sure he’d pass but is glad he did. Much like his users, Yusupov is relishing a surprise win— and eagerly awaiting the next one. 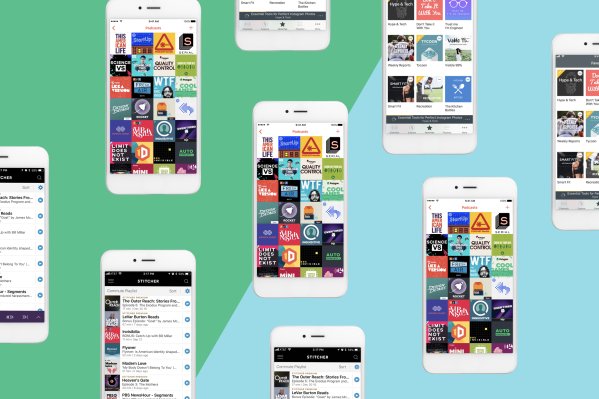 The 5 Best Podcast Apps for Android and iPhone
Next Up: Editor's Pick