Steve Bannon did not get all dressed up on Tuesday for his big European event. He still had on his grumpy-uncle uniform, the same crinkled khakis he wore while looming over the President’s shoulder in the Oval Office last year.

But the former chief strategist to Donald Trump still looked better in person, or at least more commanding, under the spotlights on the stage in Zurich, Switzerland. The crowd adored him. They had paid good money to see him in the flesh, to feel what one of them called his “charisma,” and another, beaming in the massive line to get through the door, called Bannon’s “really rough style.”

At least on this side of the Atlantic, nobody seems to care that Bannon is an outcast back home. It doesn’t matter much in Europe that President Trump has mocked him on Twitter as “Sloppy Steve” and reportedly refused to take his calls. Nor does it matter that his patrons at Breitbart News forced him to resign in January from his post as executive chairman, ripping his most cherished bullhorn from his hands. In Switzerland and much of Europe, his fans are ready to offer him a new one.

“It’s just beginning,” he told the capacity crowd at Hall 622, a venue more typically reserved for rock concerts and trade fairs, where Bannon’s name was plastered in fat, red letters above the doors and, from the speakers, the strains of Survivor’s “Eye of the Tiger” helped warm up the audience. “The tide of history is on our side,” Bannon told them.

In Europe it certainly feels that way. Despite some setbacks last year in France and the Netherlands, the style of nationalism that Bannon preaches and President Trump embodies has spread easily through Europe and, little by little, crept into the seats of power. Whatever his status back in Washington, the leaders of the European right still see Bannon as an inspiration and a figurehead, and they have ensured that his worldview translates well.

During his stop in Rome this weekend, elections in Italy handed a majority of the seats in parliament to parties which, like Bannon, want to tear up the Establishment, with one of the biggest winners being Matteo Salvini, who has called for a “controlled ethnic cleansing” of migrants from Italian towns. After lending his support to Salvini’s party, The League, which got 18% of the vote, Bannon flew to Zurich and reportedly met with Alice Weidel, a leader of Alternative for Germany, the first far-right party since the Nazis to enter the German parliament, where it took more than 90 seats after elections held last fall.

“Look at what’s happening in Poland, in Hungary, in the Czech Republic, in Austria” – all countries where the far-right already holds power to varying degrees – “even in France and Germany,” Bannon told the crowd in Zurich. “The momentum in the movement continually goes, and now you’re beginning to see a symbiotic relationship. One can feed off the other with messaging.”

Just as often, these parties feed off each other’s techniques. The host of Bannon’s speech in Zurich, for instance, was Roger Köppel, a member of parliament for the right-wing Swiss People’s Party, whose populist initiatives have included a referendum in 2010 for the “expulsion of criminal foreigners.” (It won with 52% of the vote.)

Much like Bannon, Köppel used his editorial control over a right-wing media outlet to catapult himself to power. Copies of his magazine, Die Weltwoche, were handed out for free ahead of Bannon’s speech, and they featured some rousing items that would not be out of place in Breitbart News. “Is Obama a racist?” one of them asked. Another showed portraits of the German Wehrmacht fighting in Stalingrad during World War II, and lamented how history has not given them the honor they are due.

“That’s one thing they all do well. They break taboos,” one Swiss journalist told me before the speech on Tuesday, referring to what he called Bannon’s “nationalist international.” The speaker and his host also have some stranger quirks in common. A column on Tuesday in Tageswoche, another Swiss newspaper, noted that both Bannon and Köppel are fans of Darth Vader. (The piece made me think of my visit in 2016 to the office of Austria’s far-right Freedom Party, which has a picture of the Death Star hanging behind the spokesman’s desk.)

Such tics may seem childish, but a lot of voters love this stuff. They see the hate-me-if-you-like approach as liberating. And they enjoy the arsonist’s sense of mischief that runs through all the parties Bannon wants to unite. As an added bonus, this style of politics helps its practitioners paper over the fact that they have very little in common other than their shared desire to blow up conventions and rattle the elites. Though they are all opposed to immigration, these parties span the spectrum from socialism to libertarianism on economic issues, and few if any of them in Europe would sign up for Bannon’s dream of hiking import tariffs and starting global trade wars.

“Not everyone will like the steel tariffs,” he admitted on Tuesday, referring to what he called Trump’s “pulling the trigger on China” by pledging last week to raise taxes on imported steel. But when it comes to confronting the Chinese, he added, “information warfare and economic warfare has to be engaged, because that is what’s happening today. No matter what your elites tell you, that’s the reality.”

This was not an applause line for Bannon in Zurich. As a global hub for banking and trade, Switzerland has benefited more than almost any country from the rise of the globalist system that Bannon so despises. The unofficial capital of the globalist elite sits a short drive away from Zurich in the alpine village of Davos, where the billionaire class gathers each winter to discuss how their wealth will influence power in the year ahead. President Trump was among them in January, cooing from the rostrum that “America is open for business.”

By that point, Bannon had been out of the White House for months, and it seemed like his ideas on trade had been banished along with him. The boosters of the free market, such as Trump’s chief economic adviser Gary Cohn, who accompanied the President to Davos, seemed to have tamed his desire for a trade war with China.

But fortunes shift fast in this Adminstration. By the time Bannon landed in Zurich on Tuesday, his prophecy of “economic warfare” seemed to have wormed its way back into the President’s mind and resulted in that pledge of tariffs on foreign steel. Cohn reacted on Tuesday by tendering his resignation, and the markets were still falling on the news when Bannon took the stage on the other side of the world. For the moment, at least, his ideas were back on the ascent, and the timing for his European tour seemed perfect.

Several years ago, in November 2013, when the world had yet to see Bannon’s prophecies rise to life, he reportedly referred to himself as a Leninist during a book party at his home on Capitol Hill. In Zurich the term felt more apt than ever. Vladimir Lenin, the soapbox crank and columnist who went on to rule an empire, had also found refuge in Zurich when the czar kicked him out of his homeland.

He even rented a flat for a year on a quiet street called Spiegelgasse, where he spent his time giving angry speeches and writing screeds against what was then the Establishment. His radicalism turned a lot of people off. But Lenin still found plenty of fans in Europe, enough to spread and support his ideas while he waited for the revolution to ripen back home. Perhaps Bannon’s reception here might make the same idea appealing to him, too. The way things are going at the White House, he may not have to wait that long. 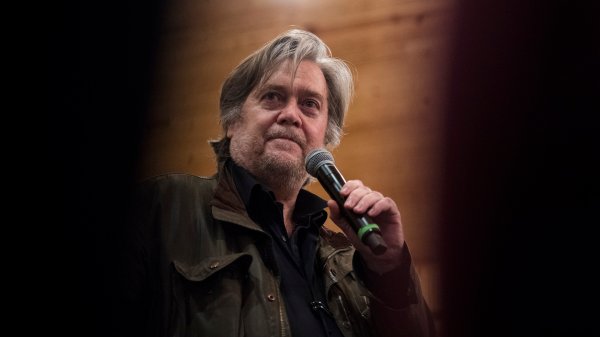 Steve Bannon Says Time's Up and Right-Wing Populism Are on a Collision Course
Next Up: Editor's Pick