The Surprisingly Poetic Origins of the Phrase 'March Madness'

When the March Madness basketball tournament officially starts up again, basketball fans around the U.S. will turn their attention to the best college teams in the nation.

But, though “March Madness” is now practically synonymous with NCAA college ball, the term’s origins are actually located one rung down the sports ladder.

The term “March Madness” is thought to have first been applied to the world of basketball by Henry V. Porter, assistant executive secretary of the Illinois High School Association (IHSA) and the former teacher and coach who led the Athens High School team to a second-place finish in their tournament. Describing the way fans looked forward to the annual statewide high school basketball tournament, he wrote that a “little March madness may complement and contribute to sanity and help keep society on an even keel,” in a March 1939 issue of the organization’s magazine Illinois High School Athlete. (That’s also the same year, coincidentally, that Oregon beat Ohio State to win the first NCAA championship on Mar. 27, 1939.)

In 1942, he elaborated on that sentiment in the form of a poem called “Basketball Ides of March,” which appeared in another publication, the Illinois Interscholastic:

The last stanza, the first line of which refers to “war nerves tense,” appears to suggest that such feats of athleticism would help America’s then-ongoing effort in World War II, framing the tournament as an important morale booster:

That said, pinpointing who exactly came up with the term may not be a slam dunk. Though Porter frequently gets the credit, etymologist Barry Popik has also claimed that the phrase was used to refer to the state high school basketball tournament in Indiana even earlier, at least as early as 1931.

Meanwhile, Brent Musburger, who covered Chicago sports before becoming an ESPN announcer, often gets the credit for associating the term “March Madness” with the NCAA tournament. That happened in the early 1980s. Usage increased as the number of participating teams increased to 64 in 1985, according to former CBS Sports executive Kevin O’Malley. (Now there are 68 Division I men’s teams and 64 Division I women’s teams in the tournament.)

There has also been some “madness” over the rights to use the phrase “March Madness.” The IHSA trademarked it in 1989, and in 1996 sued to stop an NCAA sponsor from distributing a video game with that title. Musburger acknowledged that he got the term from IHSA, so the case ended in a settlement that resulted in the two entities forming the March Madness Athletic Association, which gave the NCAA license to the term with regards to college basketball and let IHSA use it for high school basketball.

Nowadays, the madness of March continues — especially when it comes to bracketology — and the 2017 tournament set a new record for most-watched tournament in 24 years. 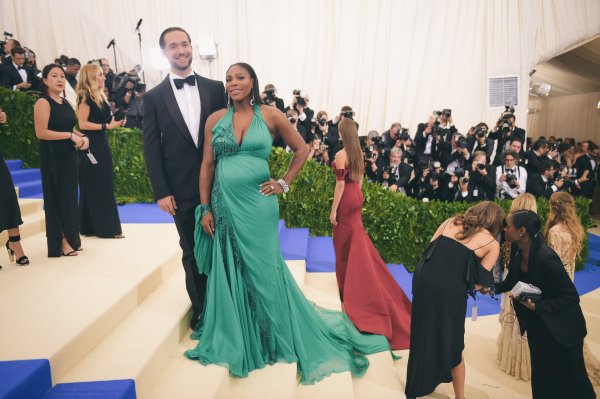 Alexis Ohanian Goes to Great Lengths to Cheer on Serena Williams With Four Emotional Billboards
Next Up: Editor's Pick