Prime Minister Haider al-Abadi in his office at Saddam Hussein’s old Republican Palace in Baghdad on Jan. 29; after the 2003 invasion, it became the headquarters of the U.S. occupation.
Emanuele Satolli for TIME
By Vivienne Walt / Baghdad

In the years since the U.S. invaded in March 2003, Iraq has seen two occupations — one by U.S. forces following the removal of Saddam Hussein’s regime, and another by Islamic State militants after American forces withdrew. Now, after fifteen years of instability and war, Prime Minister Haider al-Abadi is trying to forge a lasting peace.

That could be almost as tough as fighting the jihadists. Rampant corruption, high unemployment, deep divisions between Shi’ites, Sunnis and Kurds are just three problems the country needs to overcome, in order to piece together a lasting democracy.

To see how al-Abadi plans to do that, TIME sat down with him in his office, inside Baghdad’s fortified Green Zone, in the palace where Saddam Hussein ruled Iraq until the U.S. invasion in March, 2003. During the discussion, Abadi spoke about the “epidemic” of corruption in his country, what it will take to keep ISIS from regrouping, as well as regional issues such as the war in Syria and the conflict between Israelis and Palestinians.

The Prime Minister was also frank about the support Iraq received from Iran, and pleaded with the Islamic Republic and the U.S. not to turn his country into a battlefield for any proxy conflict. “Keep your differences away from Iraq,” he said.

The interview has been edited for clarity

TIME: How do you stop ISIS from regrouping, and taking advantage of the upheaval in this region?

Now that you have effectively destroyed ISIS militarily, why do you need American troops here? Shouldn’t they go home already?

I’m not calling for the U.S. forces to stay in Iraq. What I am saying is this: we don’t want an unfinished job. There are safe havens and there are areas controlled by Daesh in Syria, some bordering Iraq. Don’t forget they tried to establish a state in the region. And I think they were not a long distance away from achieving their own dream or goal.

That said, when will this no longer be a war that involves the U.S. military?

We need a few things yet: Restructuring our own armed forces, finishing the job of training our security forces, logistical support, intelligence cooperation. We still need them to make sure that Daesh is fully destroyed, not only militarily, but its own existence is destroyed. There is a lot of work to be done. There are terror cells which we are following up. In Syria there are safe havens, controlled by this terror organization. They are training would-be suicide bombers, would-be assassins, to commit terrorist attacks.

You have a U.S. administration that is hostile to Iran. You’re a close ally of Iran and you leaned on Iran’s support in fighting ISIS. How do you maintain these two close alliances?

There was a common factor which is that this this terror organization was a threat to the international community and is a threat to Iran as well, and to the region. And I believe there was a strategical interest for the U.S. and other allies under the leadership of the U.S.

We do not want any interference in our own affairs. This conflict between the U.S. and Iran goes back years. It has got nothing to do with us. My message to them: Please do not sort out your differences here on Iraqi soil. We need the support of both of you. Keep your differences away from Iraq.

U.S. air power and reconnaissance gave us the advance on the terrorists. It reduced our casualties, and it enabled us to hit the enemy’s headquarters and infrastructure.

Is Iraq capable of withstanding another ISIS assault, maybe under another name?

No country can withstand such onslaught. It is a huge cost in terms of human cost and material cost. Our policy is to prevent it. People must feel they are part of this country and they are citizens of this country. Reconstruction is essential as well.

We paid twice: When Daesh rolled into Iraq from Syria, they caused millions of displaced people, they killed many people; and the second stage, when we started liberating our areas. Destruction is huge. We have an estimate which amounts to $46 billion, without housing, and another $45 billion are the houses destroyed. We know the world is not ready for a donation of such an amount.

We have to factor it differently. We are encouraging investment. There are a lot of opportunities in Iraq. I’ve been meeting with companies in Paris and the U.S., and they tell me that security is no worry to them. They have another worry, which is red tape and bureaucracy.

Every person I speak to speaks about one problem: Corruption. How come you have not been able to tackle it effectively in the last few years?

It is an epidemic. People are calling on me to put corrupt people into prison. Where do you start? It is a tough business. It means a lot of investigation and a lot of this investigation has to be done abroad, because money has been transferred abroad.

The fundamental change we’re making is to make our system transparent, to remove bureaucracy. Because corruption hides in bureaucracy, in red tape. This is the cause for corruption, I’m sure, because there are bottlenecks. Somebody in the system is utilizing these bottlenecks and this bureaucracy for their own ends. Look at passports. People used to pay between $300 and $400 to get a passport. Because it took months for people to get a passport. The government before tried to track people, and put them in prison for getting bribes. Later on we said, let’s make the procedure of getting a passport much easier. Now the passport is issued within a day or mostly three or four days. So the problem disappeared.

What are your current discussions with President Trump and the administration about what should happen with Iraq?

There are huge common interests. We have to build on this. We divert in certain issues: There is a U.S. policy towards Iran. There is a problem of the decision on Jerusalem [In December, President Trump formally recognized Jerusalem the capital of Israel and has decided to move the U.S. Embassy there]. But there are huge common ground. We have a problem with the Turks, when they have sent their troops into northern Iraq and others. It goes beyond the [Trump] administration. We have to deal with the U.S. as the U.S., and Iraq as Iraq.

It’s been 15 years since the U.S. invaded. Many would say the Americans made disastrous mistakes, and that Iraq is still paying for them. Is that a fair statement?

Yes it is. It was a huge mistake by the U.S. administration [in 2003] to make it officially an occupation. They had a chance to transfer responsibility to any Iraqi authority and to be supportive to any Iraqi nationals.

If we want to rebuild the country this is a chance for us to establish a new relationship which is more positive than the relationship post-2003 with the U.S.

Do you foresee a time when Iraq might have relations with Israel?

That is hard. We have Palestinian refugees in Iraq, Jordan, Syria, everywhere. The region will keep on being unstable if you don’t solve this issue. Peace has to be solved equally. I only see imposing things, including on Jerusalem. The U.S. decision [on Jerusalem] cannot sort out the history of this city.

Did you communicate that to President Trump?

I did to Secretary Tillerson when he telephoned me before the announcement [on Dec. 6] to tell us this is going to happen. You cannot just do it in one decision, change the whole status quo.

Do you believe there can be a negotiated solution to the Syrian War that leaves Assad in power?

This is one side of the problem. The other side is, we have a territory which is feeling very much threatened, controlled by the Syrian Kurds. If Syria disintegrates, God forbid, the whole area will be under threat. If [Syrian Kurds] tried to change the map now by force on the ground this is a huge leap forward, which will force others to change their maps as well. This area was divided in the last 100 years, just by pen on the map. They drew the borders and decided these are the states. If you want to change them, there will be bloodshed in all the region.

In 2014, TIME published a cover story entitled “The End of Iraq.” I gather that was not forgotten in Iraq.

At the time I don’t blame TIME for putting this. That was published 30 June, 2014. Probably five divisions of our armed forces [had] collapsed. Terrorists were roaming the cities. We didn’t have much force. People were frightened. We have changed, after Mosul, in Tal Afar, Hawija, Western Anbar, we have sorted the fight in probably one week. The enemy was just running, running away. Their morale has been destroyed. The morale of our own people has risen up.

So this is a huge difference from before. You had “End of Iraq.” I suggest “Reemergence of Iraq.” 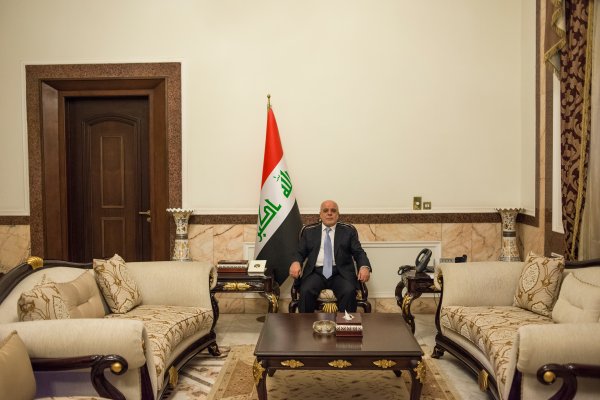 How Iraq’s Prime Minister Is Trying to Build Peace After 15 Years of Conflict
Next Up: Editor's Pick