Two weeks after 19-year-old Nikolas Cruz killed 17 people at his former high school in Parkland, Fla., Walmart announced that it would raise the age requirement for buying firearms and ammunition at its stores from 18 to 21. The change will affect only sporting rifles and shotguns; the retail giant, which is the nation’s largest gun seller, has not sold military-style assault rifles since 2015 or handguns since 1993.

While any retailer’s voluntary restriction on gun sales is welcomed by gun control advocates, evidence suggests that the new policy will not result in a significant reduction in homicides. In 2016, rifles and shotguns accounted for 8% of the 7,927 victims of homicide for which the offender’s type of gun was identifiable, according to the FBI. (That 8% includes murders committed with assault rifles, which are not distinguished from hunting rifles in the data.) Handguns are responsible for the overwhelming majority of murders committed with a firearm, though military-grade assault rifles receive disproportionate attention given their role in many high-profile mass shootings.

What’s more, only 13% of homicides involving a rifle or shotgun were committed by people between the ages of 18 and 20 in 2016, according to data that Northeastern University Criminology Professor James Alan Fox provided to TIME based on his analysis of the FBI’s Supplementary Homicide Reports. Another 7% of the shooters in Fox’s data were under the age of 18 and could not have previously obtained a firearm from Walmart or any other licensed dealer.

This still appears to suggest that approximately 100 murders might have been prevented by the new policy each year, especially as other retailers have joined Walmart in raising the age limit. But Fox points out that, at least when it comes to mass shootings, there is anecdotal evidence that guns used by those under 21 are sometimes obtained from relatives. (Notably, Sandy Hook gunman Adam Lanza used a semi-automatic rifle and two handguns belonging to his mother in the rampage that claimed 26 lives, not bothering to take the two hunting rifles she also owned.)

Even before Walmart raised its firearm purchasing age to 21, the retailer was already only selling shotguns and sporting rifles at some of its stores. A TIME examination of every Walmart location and every product advertised on Walmart.com found that, as of late last week, the company has 4,710 locations in the United States, of which 3,568 are “supercenters,” meaning they have a grocery store in addition to general merchandise. Another 404 are “legacy Walmarts” that offer general merchandise but do not have a complete grocery store. Those figures closely match Walmart’s public accounting for its retail locations in the U.S., including Puerto Rico.

A search for any gun-related product at every location found that 58% of supercenters and legacy Walmarts sell at least one of three weapons that make up the majority of the firearm inventory: a “Remington 870 Express Shotgun,” a “Stevens Model 320 Field Shotgun” and a “Savage Axis Rifle, .223 Rem.” Many sell all three. Those 2,297 gun-selling locations are highly concentrated in non-urban areas and do not appear at all in several states, including California and New Jersey, where state laws or political pressure have chased all lethal weapons from Walmart’s shelves.

Lorenzo Lopez, Walmart’s senior director for corporate communications, told TIME that “we normally will provide [a shotgun or rifle] based on where the demographics tell us that there’s a customer base for them.” He further noted that the website does not always reflect a store’s on-site inventory since it may include online-only products, though this does not affect firearms.

There is no comprehensive data on which retailer sold a weapon used in a homicide. But given all the factors, including the fact that not all Walmarts sell firearms, it is reasonable to estimate that the number of murders in 2016 committed with a gun purchased at Walmart by someone under the age of 21 is in the single digits.

In its announcement about raising the age limit, Walmart also said it will discontinue pellet guns and toy guns that too closely resemble a military-grade weapon. Virtually every supercenter and legacy store sells at least a handful of air guns and BB guns, even if they do not stock shotguns or rifles. These weapons are much more likely to take an eye than a life; a 1998 study found only five documented incidents involving a fatal air gun injury. There is also no clear evidence that playing with toy guns makes a child more likely to commit a crime later in life, though research on this topic is scant. A 2018 study of British children over 10 years did not find a statistically significant relationship between playing with guns at age 5 and committing crimes by age 15 after controlling for other factors.

Where the new policy might have a more meaningful effect is in the under-discussed issue of suicide; a majority of gun deaths are self-inflicted. “If we raise the minimum age, there’s some chance that we’ll reduce the number of suicides,” says Jon Vernick of the Johns Hopkins Center for Gun Policy and Research. This is because youths are considered to be at a higher-than-average risk for suicide, Vernick says, and because, more importantly, the “case fatality rate” for suicides — those who die in the attempt — is by far the highest for those who use a gun.

The method that a person employs in his or her first suicide attempt is of critical importance. While there’s dispute over the likelihood that a person who attempts suicide and survives will make repeat attempts that result in death, there is no question that a person who does not have easy access to a firearm and employs a less lethal method in the first attempt is more likely to survive and may receive treatment.

However, we do not know how many youths who commit suicide with a firearm purchased it themselves. If the availability of alcohol to minors is even a weak analogy, then raising the age limit will not keep lethal weapons out of the hands of every person under age 21. The only way to accomplish that would be removing the guns from the inventory altogether.

Correction: The original version of this article misstated that some Walmarts also sell firearms sold by third parties. It has a marketplace program for third parties to sell online, but it does not include guns or rifles. 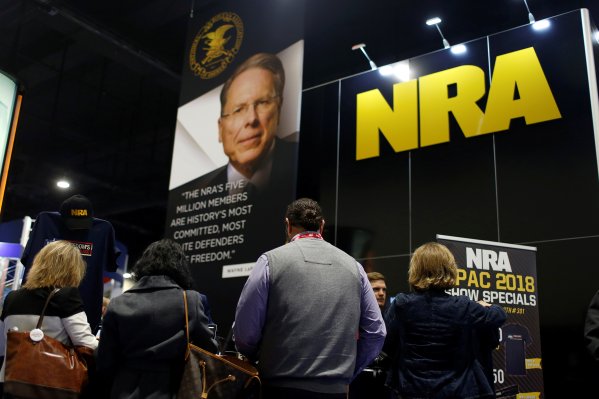 Membership in Gun Groups Is Spiking After the Florida Shooting
Next Up: Editor's Pick