The First Major Primaries of the Midterms Are in Texas. Here's What to Watch

Sen. Ted Cruz attends a lunch with members of Congress hosted by President Donald Trump in the State Dining Room of the White House on July 19, 2017 in Washington, DC.
Michael Reynolds - Pool/Getty Images
By Alana Abramson

The first wave of primaries in the 2018 elections takes place in Texas Tuesday. There has been much discussion about a reported surge in enthusiasm among Democrats, and the question is whether that energy can turn into votes on the ground — even in deep red states like Texas.

Polls in Texas have already opened, and will stay open until 7 p.m. Central time. Democrats in the state are proudly touting the fact that for the first time in over two decades, the party has fielded candidates in all of Texas’ 36 congressional districts.

And if early voting is any indication, Democrats enthusiasm is translating into votes. As of March 2, 885, 574 Texans had voted early, either by mail or in person. Of that, 465, 245 —nearly 53 percent—were done by registered Democrats, according to data from Texas Secretary of State. Vox notes that early voting among Republicans declined by 37 percent from 2016. And David Wasserman, the U.S. House Editor of the nonpartisan Cook Political Report, noted after early voting closed that there was a 105% spike in early voting among the Democrats since 2014, while Republicans only saw a 15% spike.

“There is a wave of voters building to wash away Trump’s control of Congress and it is starting tonight. Every poll shows independents and swing voters are rejecting Trump and his Republican Congress and now every primary will show that Democratic voters are fired up and ready to go,” Jesse Ferguson, a Democratic strategist who previously worked for Hillary Clinton’s presidential campaign and the Democratic Congressional Campaign Committee, wrote in an e-mail to TIME Tuesday.

Seven members of Congress from Texas, six of whom are Republicans, had announced their retirements prior to the primaries, further widening the field.

Among the prominent politicians up for reelection are Texas Gov. Greg Abbott and Republican Sen. Ted Cruz. Although both face intra-party challenges, both are expected to easily win the primary.

Polling shows that U.S. Rep. Beto O’Rourke is favored to win the Democratic Senate primary and challenge Cruz in the fall. The Democratic gubernatorial primary appears a bit more competitive. A University of Texas/Texas Tribune poll released last month had one of the candidates, Lupe Valdez, the former Sheriff of Dallas County, leading the pack, with 43 percent support. Valdez was followed by Andrew White, but will need to crack 50 percent to avoid a runoff, per the state’s rules — a challenging thing to do in such a crowded field.

Jeb Bush’s son, George P. Bush, is running for reelection as land commissioner, and is facing a primary challenge from Jerry Patterson, who preceded him in the position. President Donald Trump has said he is backing Bush, despite the palpable tension between Bush’s father, Jeb and the President during the 2016 presidential primary, when Trump repeatedly touted Jeb as “low energy.” 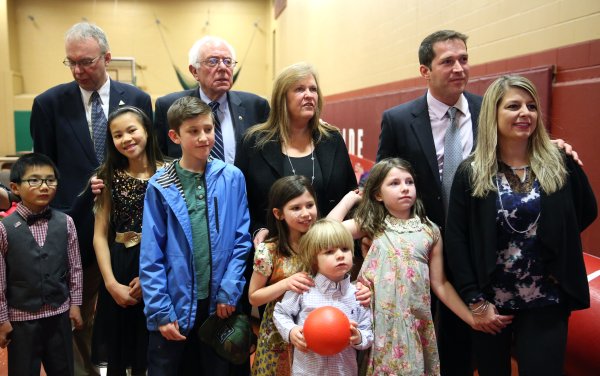 Bernie Sanders' Son Is Running for Congress in New Hampshire
Next Up: Editor's Pick