A journalist shows CCTV footage on a mobile phone showing a man believed to be Sergei Skripal, and woman who were later found unconscious, on March 6, 2018 in Salisbury, England.
Dan Kitwood—Getty Images
By Tara John

A former Russian double agent is currently in intensive care in the U.K. after being exposed to an “unknown substance” on Sunday. The tale of how Sergei Skripal came to be found slumped on a bench in a southern English city is one of spy-swaps and suspicious illnesses.

Sergei Skripal and his daughter Yulia were found unconscious on Sunday in the market town of Salisbury, around 100 miles south-west of London. Before 2006, the 66-year-old served as a colonel with the Russian military intelligence (GRU), worked in the foreign ministry and later became involved in business, Associated Press reports.

But that year, Skripal was found guilty in Moscow of passing state secrets to Britain. The Federal Security Service (FSB) said that he was recruited by British MI6 intelligence service in the mid-90s. Russian prosecutors accused him of revealing the identities of dozens of Russian agents living in Europe and receiving more than $100,000 for his services in a Spanish bank account.

After spending more than four years in prison, Skripal and three other Russian nationals were pardoned and released from custody in a high-profile spy exchange with the U.S. and its ally the U.K. Their release was in exchange for ten deep-cover Russian operatives living in America, who made up a infamous spy ring the U.S. Department of Justice called the “Illegals Program.”

The so-called illegals were found to be working for Russia’s foreign intelligence services while embedded in normal American society. Nearly all the deep-cover agents lived in the suburbs, worked white-collar jobs, supported American sports teams, went by Anglicized names. Some went on to have children. The most high-profile of the group was scarlet-haired New York socialite Anna Chapman, a diplomat’s daughter formerly known as Anna Kuschenko, who once worked at Barclay’s Bank and gained a British passport after marrying ex-husband Alex Chapman.

Hours after admitting to being foreign agents in a U.S. court, the group were flown to Vienna and were swapped with four former Russian prisoners, which included Skripal. The BBC reported at the time that American and Russian aircrafts were parked side by side on the runway with covered aircraft stairs brought up to both planes. The airport swap would mean that none of the agents had officially entered Austria.

Also among the alleged Russian spies was Igor Sutyagin, who had been sentenced 15 years in prison for spying for the West. The two men were transported to a military base in Britain together. “I can tell you he was glad to reunite with his family” Sutyagin told TIME during a phone interview.

Sutyagin, an arms control and nuclear weapons specialist, was sentenced to prison on charges of passing information to a company Russia claimed was a CIA-front. Sutyagin has always maintained his innocence and was described as a prisoner of conscience by Amnesty International.

Once in Britain, Skripal opted for a quiet retirement in south-west England and Sutyagin went on to become a research fellow Royal United Services Institute think tank. Land Registry documents found by the Guardian show Skripal bought his modern, red-brick home in Salisbury in 2011. But his life in Britain was marked by tragedy. His wife Liudmila died of cancer a year after in 2012 and his son, 44, reportedly died last year in Russia from an unknown illness.

Now Skripal too has been struck down by an unidentified malady. Sutyagin believes Skripal was poisoned but would not be drawn on whether he thought Russians were involved. “It might be family problems, it might be business, it might be some secret service plot. But which secret services? DPRK? Bulgarians? ” Sutyagin says. “The last time something like this happened the DPRK [North Korean] secret service poisoned Kim Jong Il’s half brother…it is all speculation.”

On Tuesday, the investigation was handed to the country’s counter-terrorism unit. “It has not been declared a terrorist incident and at this stage we are keeping an open mind as to what happened” the Metropolitan Police, which takes the national lead on terrorism, wrote in a statement. Police are still trying to ascertain what substance caused Sunday’s unexplained illness, which has drawn comparisons to the case of Alexander V. Litvinenko, a former Russian spy who died 2006 after drinking polonium-laced tea in London.

The situation risks turning into a diplomatic incident. British Foreign Minister Boris Johnson agreed that it was too early to conclude that Skripal was part of another Russian assassination attempt on British soil, but warned that Britain will have to consider new sanctions if suspicions were proved true.

“Though I am not pointing fingers, I say to governments around the world no attempt to take innocent life on English soil will go unsanctioned or unpunished” Johnson told his parliamentary colleagues on Tuesday. “If the suspicions prove to be well-founded, then it may very well be that we are forced to look again at our sanctions regime and other measures that we may seek to put in place.” 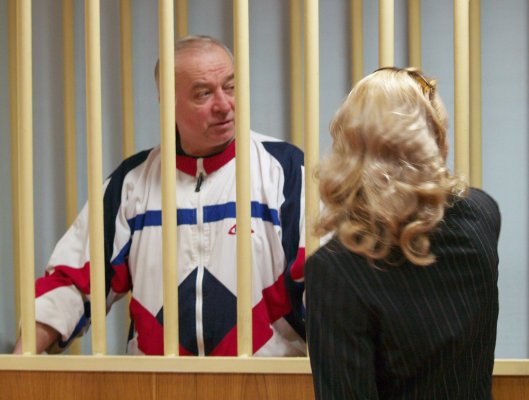 Ex-Spy Sergei Skripal Is Just the Latest Russian Dissident to Meet Tragedy on British Soil
Next Up: Editor's Pick