Hundreds of protestors had gathered on a road leading into the campus when they were met by several dozens supporters of Spencer. Fights broke out, resulting in at least six arrests, according to Reuters.

Armored police vehicles and officers wearing riot gear were present and promptly broke up the brawls before handcuffing half a dozen of the participants, the outlet reported. Police then formed a blockade to prevent further fights from erupting.

Spencer’s whereabouts at the time of the altercation were not immediately known, and it remains unclear if his speech will go ahead as planned. Officials at Michigan State did not immediately respond to a request for comment.

“These people are scum,” David Sherman, a 25-year-old who was there protesting Spencer’s speech, told Reuters. “We chased them away. This is our free speech being exercised.”

Spencer is a well-known white nationalist whose views and speeches have drawn considerable outrage before. The Souther Poverty Law Center identifies him as “one of the country’s most successful young white nationalist leaders — a suit-and-tie version of the white supremacists of old, a kind of professional racist in khakis.” 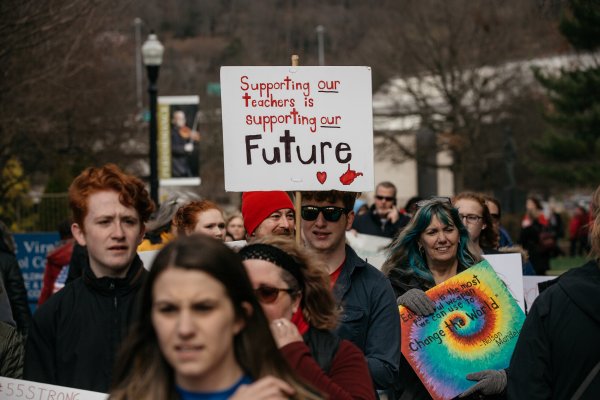 What the W. Virginia Teacher Strike Means for Students
Next Up: Editor's Pick