After Frances McDormand took home the award for Best Actress at the 2018 Academy Awards, her fellow nominees came together to celebrate each other.

Following McDormand’s emotional speech, Meryl Streep, Sally Hawkins, Margot Robbie and Saoirse Ronan were all smiles as they wrapped their arms around one another while the broadcast went on a commercial break.

The actresses’ sweet and supportive moment came after McDormand asked every female nominee in the audience — across all categories — to stand up and take a moment to appreciate each other during her acceptance speech.

“If I may be so honored to have all the female nominees in categories stand with me tonight, the actors, the filmmakers, the directors, the producers, the writers, the cinematographers, the composers, the designers,” she said.

Turning to one, very special, front row attendee, McDormand encouraged, “Meryl, if you do it, everybody else will. C’mon.”

She then gave an impassioned plea for Hollywood to tell more female stories.

“Look around, everybody. Look around, ladies and gentlemen, because we all have stories to tell and projects we need financed,” said McDormand.

“Don’t talk to us about it at the parties tonight. Invite us into your office in a couple days or you can come to ours, whichever suits you best, and we’ll tell you all about them. I have two words to leave with you tonight. Ladies and gentlemen: inclusion rider,” she added.

According to Dr. Philip Goff, President of The Center for Policing Equity, an inclusion rider is “a clause in an actor’s contract that requires the cast and crew be diverse in order to retain the actor.”

The 2018 Oscars were held at the Dolby Theatre at Hollywood & Highland Center on March 4 and were telecast live on ABC. 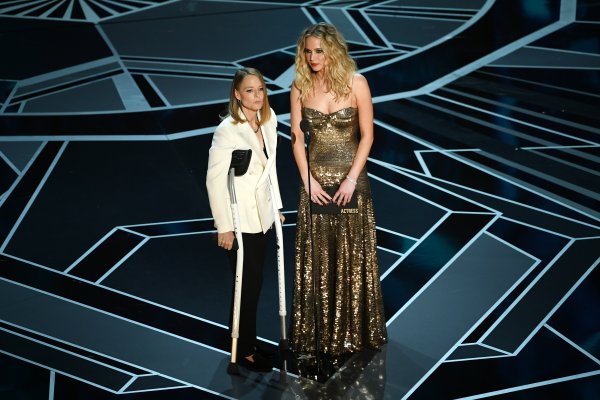 Here's Why Jodie Foster Was Using Crutches at the Oscars
Next Up: Editor's Pick