The central mosque of Bangui once held about 2,000 internally displaced people but now the number has dwindled as Muslims seek to leave the area where they have been persecuted in recent months by "anti-balaka" militias, Bangui, Central African Republic, March 13, 2014.
Rick Loomis—Los Angeles Times/Polaris
By Imam Oumar Kobine Layama and Reverend Nicolas Guerekoyame-Gbangou

This week, these three leaders are hosting U.S. religious and political leaders for a mirror visit to CAR. The group includes representatives from the National Association of Evangelicals, the United States Conference of Catholic Bishops and Catholic Relief Services, and the Islamic Society of North America, along with Ambassador to the United Nations Samantha Power, Rep. Karen Bass (D-CA), Ambassador Linda Thomas-Greenfield, Assistant Secretary for African Affairs, U.S. Ambassador to Rwanda Donald Koran and Stephen Rapp, Ambassador-at-large, Global Criminal Justice.

We came to the United States of America almost a year since our country was set on fire, and still the flames of violence and vengeance are threatening to burn down a history of peace and coexistence in the Central African Republic. Today, security remains the rarest of commodities in our country as men, women and children fear the neighbours they grew up with.

Yet, despite the horrific violence, hope endures. Hope that fires can be put out, wounds healed and a country rebuilt. As religious leaders whose congregations represent almost the entire country, we are clear as to both our moral responsibility and the steps needed to take us out of the darkness. Our voice is strong, our message is simple. We support newly elected President Catherine Samba-Panza and her urgent call for a UN peacekeeping operation as soon as possible to take over from the African and French troops currently on the ground. This UN Operation must be robust not only to help restore security, law and order in our country, but it must bring resources to help rebuild our country’s administration. Without strong institutions, we risk the repeat of cycles of violence.

In meetings with US policymakers this past month we were asked repeatedly if ethnic cleansing is on the horizon. The answer is yes – if nothing more is done the violence will spiral into just that. We however reject the idea that this is a religious conflict. We, Muslims and Christians, grew up in peace. As children, we played together with the toys received at Christmas; we shared feasts of lamb at every Eid celebration. We went to the same schools, we learned and played together. Muslim, Christian, animist – we didn’t know the difference. As we celebrated each others’ customs, we embraced diversity. This richness was the foundation of our society. It was in the past and it could be again in the future.

Yet in the present, our social fabric has eroded as the state failed and militias began to violently organise against each other, breeding a vicious cycle of revenge and reprisals. People have used religion as a pretext, a cover for their ambitions of power, but never has an Imam, a Bishop or a Pastor led the fighting or justified the killing. CAR has become the dustbin of Africa, home to rubbish expelled from elsewhere. Foreign mercenaries from neighbouring countries crossed our borders and looted, undeterred. Questions over Muslims supporting the gunmen aroused suspicions, and entire neighbourhoods, many of them Christian families, became resentful of the abuses. A simple case of flawed perceptions and misunderstandings, fed by anger over loss of relatives, the destruction of homes and lack of a better alternative due to chronic poverty and corruption, spun into violent rampage.

We recognize the tremendous role that the US have done to provide life-saving assistance and the support of the US military to transport troops from other African countries to help restore stability. We are currently asking for partnership to help resolve the current crisis that has killed thousands of our countrymen, and to help us to eradicate the roots of this hatred and violence. We recognize that it will be long, hard work, but we need to help ensure that this does not happen again.

While the root causes of the current conflict no doubt need to be addressed, the most immediate, pressing task is to have UN blue helmets on the ground to quell the violence and lead efforts to disarm the gangs that roam the land. It is a daunting task, and whilst the African and French troops currently on the ground have done a valiant job, security can only be made a reality if there are more and better equipped forces on the ground. Let us have no doubt that the remarkable work of African and French forces has saved the lives of thousands. However their efforts must be buttressed. If the UN is mandated to send peacekeepers, a larger number of troops can cover our vast country – which is almost the size of Texas – more effectively. Undoubtedly, this will require a higher financial contribution by the international community but these peacekeepers will be better equipped, meaning they can act more quickly to save lives. Recently, we witnessed African troop commanders being called on their cell phones to receive instructions to intervene. By the time soldiers arrive on the scene to disarm and protect civilians – often on foot because of too few vehicles – it is usually too late. A robust UN peacekeeping force will also allow neutral troops who are not party to the conflict to disarm and neutralise all armed groups, regardless of whether they are anti-Balaka, Seleka or members of the Lord’s Resistance Army.

Since last March, thousands have died, over one million have fled their homes and over half the population has become dependent on aid. The best way to honour the fallen is find a sustainable peace and rebuild the country. Whilst we, as leaders of faith, work to heal the hearts of our nation, we look to the international community to support our fragile democracy. We need our American friends to help us rebuild our country so that our vision of a country where Central Africans live again in peace and harmony can be fulfilled. 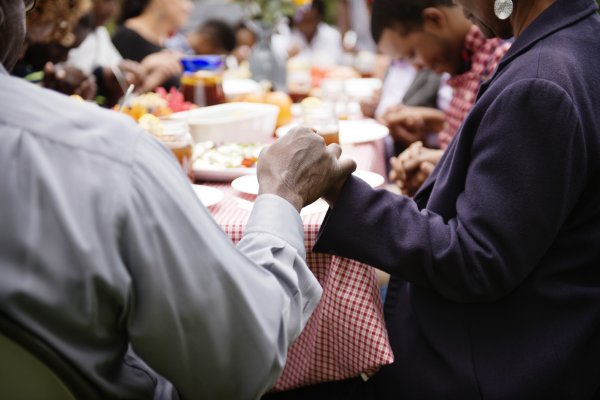 Are Religious People Nicer on Sundays?
Next Up: Editor's Pick