Jennifer Lawrence Laughing at Emma Stone During the Oscars Is Priceless

Jennifer Lawrence wasn’t nominated for an Oscar at the 90th Academy Awards, but that didn’t stop her from having the time of her life at the awards show.

Other than climbing over chairs holding a glass of wine, J-Law took a moment to laugh at her best friend and seat-neighbor Emma Stone during Jimmy Kimmel’s opening monologue. Kimmel’s speech began by making fun of last year’s Best Picture mix-up when La La Land was called instead of Moonlight. “This year, when you hear your name called, don’t get up right away. Just give us a minute. We don’t want another thing,” he said.

Kimmel’s inevitable mention of the “unfortunate” mistake caused Lawrence to point at Stone, who appeared to be stifling a laugh. This moment proved to be another cornerstone in Lawrence and Stone’s epic friendship, and the Internet fully agreed.

Lawrence presented the Oscar for Best Actress alongside Jodie Foster. Stone made a statement during her Best Director announcement when she said, “These four men and Greta Gerwig created their own masterpieces this year.” 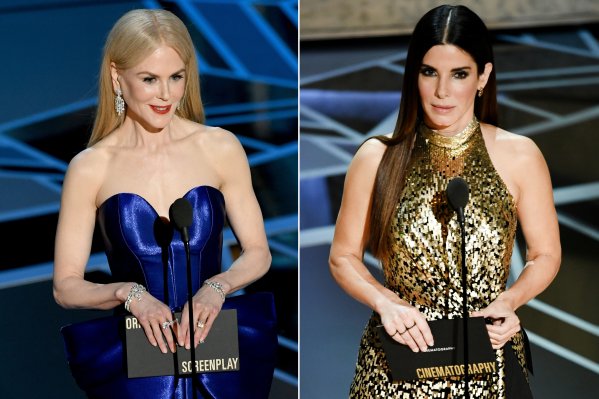 Nicole Kidman and Sandra Bullock Had an Enchanting Practical Magic Reunion at the 2018 Oscars
Next Up: Editor's Pick