In the 12 hours since Guillermo del Toro’s The Shape of Water was named Best Picture at the 90th Academy Awards, many have been addressing its victory in relative terms: A less exciting choice than Get Out. A more agreeable pick than Three Billboards Outside Ebbing, Missouri. Not as bad as Crash or as great a robbery as Shakespeare in Love. This has led to a rapidly solidifying narrative acknowledging that while The Shape of Water is a gorgeous, accomplished film by a well-respected filmmaker, it’s ultimately a forgettable win. But the movie deserves more credit than it’s getting.

There was little chance of any win, save Get Out, repeating the excitement of Moonlight’s underdog triumph at the 2017 Oscars. That the Best Picture race was so wide open heading into Sunday night’s ceremony was somehow less exciting than it ought to have been. Sure, The Shape of Water probably won’t go down in history as one of Oscar’s most memorable winners. But its victory was still fresh, unconventional and more timely than it appeared.

For one thing, the film had the odds stacked against it. Its lack of a nomination for a SAG Best Ensemble Award had some prognosticators thinking its chances were slim, given that, as Collider points out, a movie hasn’t won Best Picture without that nomination since Braveheart in 1996 (and never before that). It’s also a genre film, which voters have historically taken less seriously than classic dramas. Though it’s debatable what genre, exactly, The Shape of Water can be classified as, those who see it as science fiction point out that it’s the first sci-fi film ever to take home top honors.

What’s more, it’s weird. A human lady (spoiler alert) has sex with a fishlike river god whose scaly skin glows like a circuit board — and who snacks on cats. Despite that, weird seems to be what the people wanted this year: though it certainly wasn’t a blockbuster on the scale of Dunkirk, it’s the most watched winner in five years, its $126.4 million in global box office receipts the highest since Argo.

It’s also more quietly subversive than many have argued. It’s the story of a disabled woman, a gay man and a black woman teaming up to take down the most establishment of establishment men, a Don Draper type but dialed up from antihero to villain, with every lost drop of humanity drained out. Its opening montage features a woman masturbating as a regular part of her morning routine, which hasn’t been seen in a Best Picture winner since, well, ever. And more than a few critics have discussed it as a new entry in queer cinema and a “love letter to the LGBT community,” a narrative in which love in many forms is celebrated.

Is it as acutely subversive as Get Out? Far from it. Does it require more mental gymnastics to apply its themes to contemporary America? Most definitely. The Shape of Water will always have its detractors. There are those who say that if you make the fish man a human man, its weirdness melts away and it’s merely a rehash of a classic Hollywood romance. That it is, like La La Land, a Hollywood love letter to itself, with its classic movie theater set pieces and its black-and-white Fred Astaire-Ginger Rogers tribute. There is also still an open lawsuit claiming that its premise and many of its details were plagiarized from Paul Zindel’s 1969 play Let Me Hear You Whisper. It remains to be seen how that fight will play out in court — and whether it will put an asterisk next to its win in the annals of Oscar history.

Ultimately, the night ended with the Oscar (well, two of them, including one for Best Director) in the hands of a Mexican immigrant who used his platform to deliver a message about the power of art to demolish the walls between us. It certainly seemed to strike a chord among the crowd at the Dolby Theatre, where nary a face wasn’t melting into a gush of admiration for an artist whose celebration, many felt, was long overdue. “This is a door,” del Toro said in a message to aspiring filmmakers. “Kick it open and come in.” They could do worse than to follow his lead. 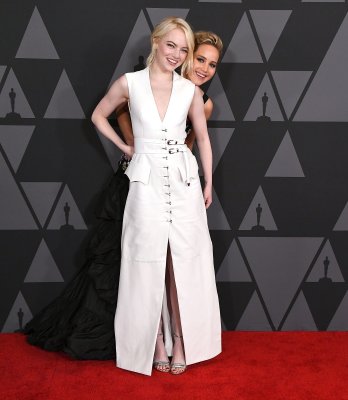 Jennifer Lawrence Laughing at Emma Stone During the Oscars Is Priceless
Next Up: Editor's Pick